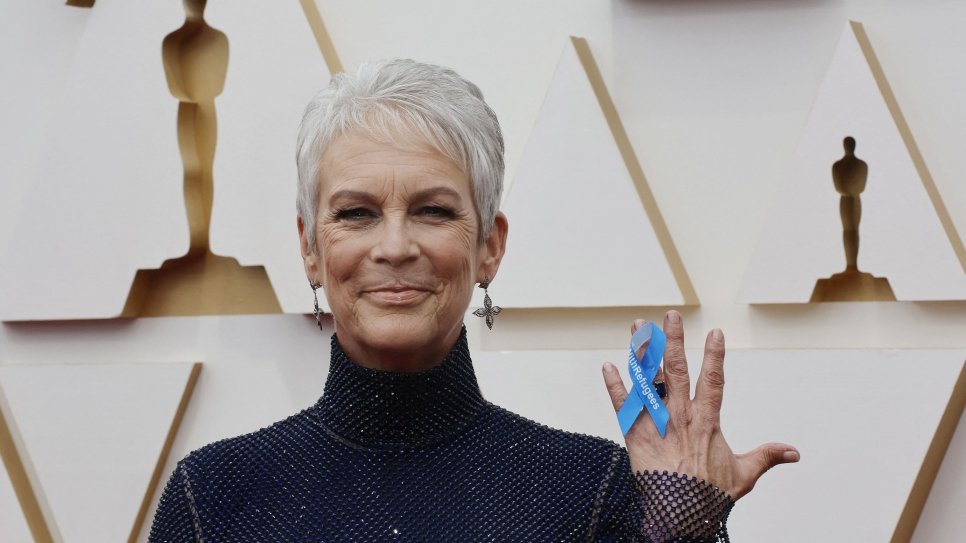 Jamie Lee Curtis holds up a ribbon that reads ‘X20WithRefugees’ supporting refugees around the world on March 27, 2022 as she poses on the red carpet at the 94th Academy Awards in Hollywood, USA . © REUTERS/Eric Gaillard

On the evening of Sunday March 27, 2022, as the eyes of the world were on Los Angeles and the 2022 Academy Awards, the issue of forced displacement around the world was also in the spotlight.

Five of the Oscar-nominated films this year tackled the themes of displacement, home and belonging to a place. Among them, Dune, Flee, Encanto, Three Songs for Benazir and Belfast addressed issues directly related to what it is like to be a refugee. UNHCR has also received support from Participant and Netflix in promoting the issue of global displacement, expressed forcefully in their films Flee and Three Songs for Benazir.

In this context, UNHCR, the UN Refugee Agency, has worked closely with artists and advertisers to help highlight the humanitarian emergency in Ukraine and other refugee crises around the world. . Both online and in person, some of the world’s most famous faces used this year’s Oscars to express their solidarity with refugees around the world.

Prior to the ceremony, UNHCR showcased stories of displacement and the strength of the human spirit conveyed by numerous nominated films on Twitter, Instagram and Facebook. The surge of solidarity with refugees that followed was amplified by supporters such as Hans Zimmer, Jake Gyllenhaal, as well as our Goodwill Ambassadors.

Thank you to all those who showed their support for refugees during the ceremony of #Oscars 2022 🎥 🏆. pic.twitter.com/yhneVg6iLE

“I just want to highlight the refugee crisis and make people realize that this is a humanitarian crisis. The refugee crisis is very real”said American actress Jamie Lee Curtis, as she spoke to reporters on the red carpet, especially about her decision to wear the ribbon.

Before the war in Ukraine, there were already more than 82 million forcibly displaced people in the world. Thanks to the themes highlighted in the five nominated films, the incredible online engagement and the strong individual support of the stars present at the Oscars, the biggest evening of entertainment helped to shine a light on the humanitarian emergencies unfolding in Ukraine. and beyond, and all who support refugees.

At the Oscars, Hollywood stars show their solidarity with refugees