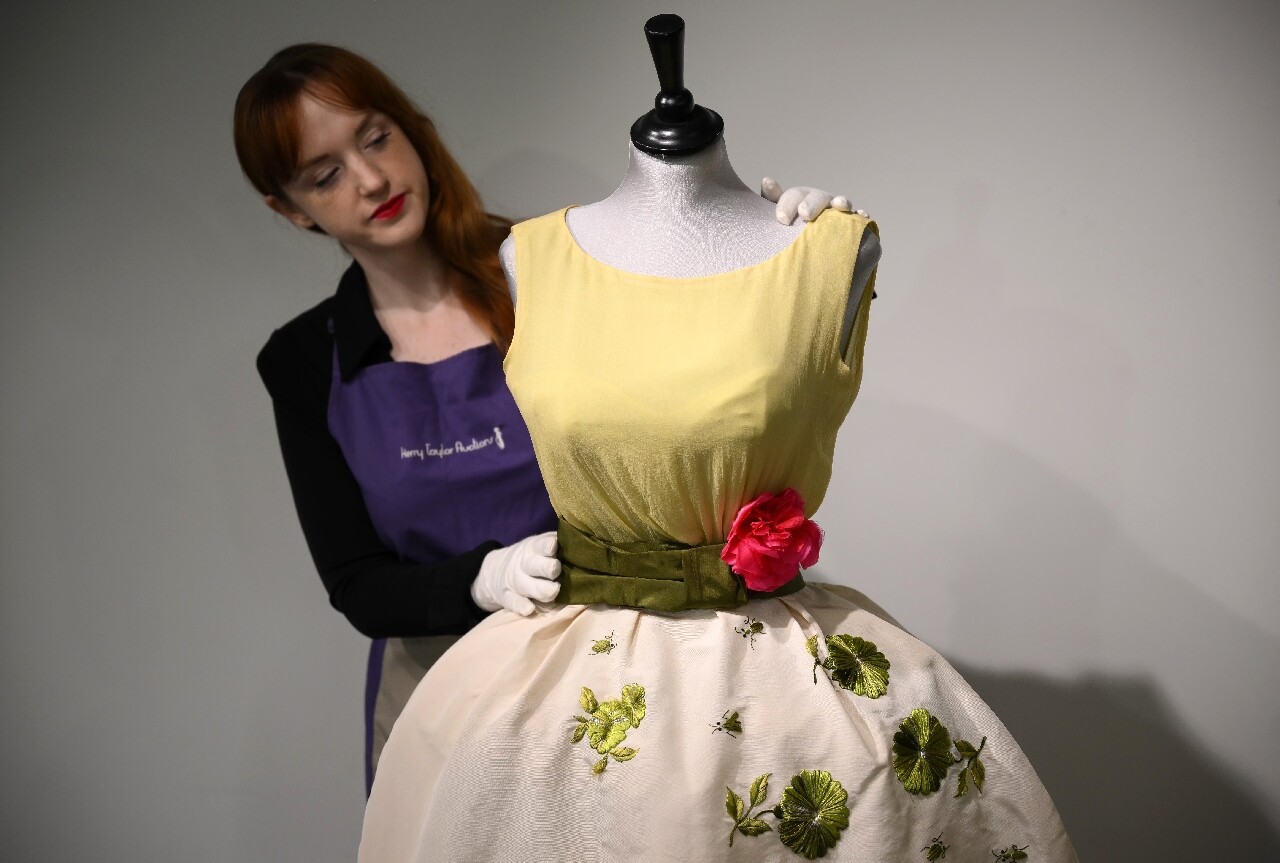 After spending 50 years in a suitcase, a “lucky” dress worn by actress Elizabeth Taylor when she won her first Oscar in 1961will be auctioned in early December 2022 in London.

Many thought that the dress Christian Dior with a floral print at the bottom, with a red rosette at the waist, was carefully preserved for more than 60 years in the archives of the fashion house.

But in fact, the actress had given it in 1971 with a dozen other clothes to a former assistant, Anne Sanz, who had kept it in a suitcase plastic, stored in a room.

After three years of nomination without reward

Elizabeth Taylor, accompanied by her fourth husband, singer Eddie Fisher, wore the dress created by Marc Bohan for the 33rd Academy Awards, convinced that she would not win.

She had been named three times in the previous three years, without success. And his marriage to Eddie Fisher, previously married to the famous actress Debbie Reynolds had caused a scandal, Elizabeth Taylor being perceived as a home wrecker.

“She really didn’t expect to win, having been passed over previously and because of all the negative press about Eddie Fisher,” Kerry Taylor, whose vintage fashion auction house will put the dress on, told AFP. on sale December 6, and hopefully between 40,000 and 60,000 pounds (46,500 to 70,000 euros).

A dress that has traveled all over the world

After winning the Best Actress Oscar for her role in the film Venus with Mink (Butterfield 8 in the original version), the star had considered the dress as “a kind of lucky charm” and took it all over the world.

“She still carried it with her 10 years later. She didn’t wear it for other occasions, she just liked to have it with her,” says Kerry Taylor.

But Elizabeth Taylor’s travel wardrobe is becoming more and more cumbersome, with sometimes more than 40 huge suitcasesas she traveled the world in the 1960s and 1970s with her fifth husband Richard Burton, at the height of their fame, but also Anne Sanz and her husband Gaston, who served as the actress’ driver and bodyguard.

More dresses at auction in December

In 1971, opening her wardrobes at the Dorchester Hotel in London, and despite her sentimental attachment to her Dior dress, she told Anne Sanz, “take what you like”. She will also give her a white piqué cocktail dress and a matching bolero for her wedding.

Other garments up for auction on December 6 include pieces from the Tiziani haute couture collection by Karl Lagerfeld and a black dress worn by Liz Taylor in the 1967 film “Boom,” also by Lagerfeld.

Over the years, Anne Sanz has worn a few pieces and given others to friends and family members, never considering them particularly important or valuable.

“Anne obviously wore the piqué dress for her wedding, and she also wore a yellow and blue dress with matching coat,” Kerry Taylor says. “But in a way it was just second-hand dresses that belonged to Liz Taylor,” she says. It was “before the notion of celebrity became what it is”.

Elizabeth Taylor (1932-2011) toured during her lifetime over 70 moviesand won several Oscars and Golden Globes notably. She had been married eight times.

Was this article helpful to you? Know that you can follow Actu in space My News . In one click, after registration, you will find all the news of your favorite cities and brands.

Elizabeth Taylor: after 50 years in a suitcase, one of her “lucky” dresses at auction

Oscars in search of glamor
Colin Farrell and Michelle Yeoh honored at Golden Globes in search of redemption
RETRO 2022 – The kiss of Albert and Charlene of Monaco, the slap of Will Smith: the 30 highlights of...
Tweet
Share
Share
Pin
Other links: https://awardworld.net/resources/