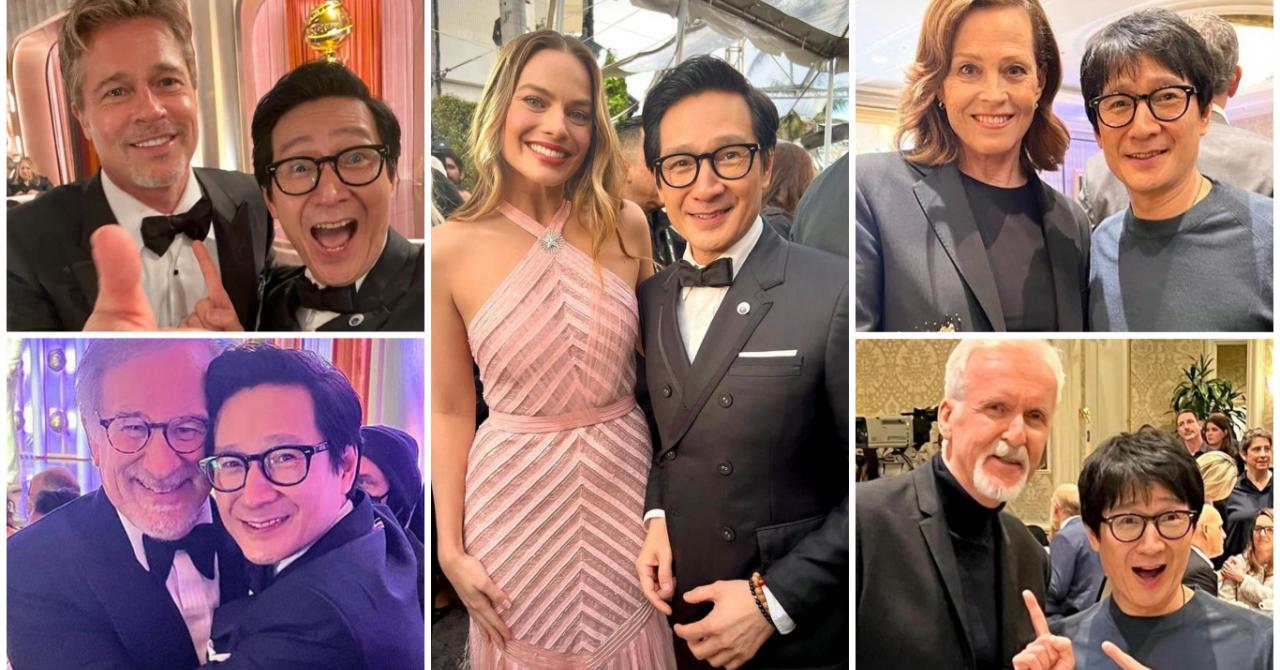 The Everything Everywhere All at Once actor is living his best life during Oscar season.

What revenge for Ke Huy Quan ! revealed in Indiana Jones and the Temple of Doom (1984) with the character of Demi-Lune, then in The Goonies (1985) where he played Data, the actor of Vietnamese origin finally knows the consecration thanks to Everything Everywhere All at Once. His supporting role as the husband of Michelle Yeoh, in this amazing multiverse film produced by A24 and critically acclaimed by critics, won him around 50 awards during the Oscar season, including a Golden Globe. A beautiful story for the actor who has experienced an interminable crossing of the desert for almost 40 years.

Ke Huy Quan comes from far, far away. In 2000, he even stamped as an assistant on the fight choreographies of the first X-Men. On a video that has resurfaced, we can thus see him preparing a scene of Wolverine with Hugh Jackman and his double. And when he finally found the way to the sets, after having remained 20 years without playing, it was for a meta role in Ohana or the hidden treasurea Netflix production that happily pumped The Goonies.

Back in 2000, Ke Huy Quan was working as an uncredited stunt trainer on X-MEN. 23 years later, the first call he received after #EverythingEverywhere debuted was from Kevin Feige asking him to join the MCU & star in #Loki S2. What a story
via @mccrabb_willpic.twitter.com/Zjdxw6wd5D

Everyone had forgotten about him in Hollywood. Everyone except Steven Spielbergwho sent him a Christmas present every year since the filming of the cursed temple. “Spielberg was the first person to put an Asian face in a Hollywood blockbuster. Half Moon is funny, he’s brave, he saves Indy’s ass. It was a rarity then. For many years after that, Hollywood unfortunately backtracked“, he confided last November to the Guardian.

By what miracle Ke Huy Quan was he therefore able to find the light, and land this major role in Everything Everywhere All at Once ? During a meeting between actors organized by the HollywoodReporterhe recently explained to Austin Butler, Brendan Fraser and Adam Sandler that the two directors, Daniel Kwan and Daniel Scheinert, thought of him after coming across a Facebook joke that compared him to the American politician of Chinese origin Andrew Yang: “Demi-Lune has grown up and wants to become president“. The duo then wondered what had become of Quan all this time. Luckily, the latter had just taken over an agent. And that’s how he signed for the film, with Jeff Cohen aka Choco des Goonies as a lawyer!

Watch Everything Everywhere All at Once on VOD on Première Max

We understand better why he displays such a banana in the award ceremonies where he chained the awards and photos with the cream of Hollywood, from Margot Robbie to Brad Pitt, via James Cameron, Sigourney Weaver, Ana de Armas , Andrew Garfield or Ben Stiller, with whom he reproduced the famous “Blue Steel” pose of Zoolander.

“What a memorable night at the 80th Golden Globes“, commented the 51-year-old actor on his Instagram account. “I am so happy to be able to share these photos with you. Seeing Steven again was a highlight of the evening. I love this man so much. He is the reason why I fell in love with comedy (…) I dreamed of coming to the Golden Globes. I can’t believe I walked the red carpet with all these talented actors who I’ve always adored and who inspire me.”

The waking dream Ke Huy Quan is not finished yet. Tuesday, we will know if he is one of the nominees for the Oscars 2023 in the category best actor in a supporting role. And we will find him this year on the poster for season 2 of Loki, on Disney Plus. It was Kevin Feige, the big boss of Marvel, who called him personally to offer him to join the MCU. What revenge, we tell you.

From the Goonies to the Golden Globes, look back at the miraculous resurrection of Ke Huy Quan