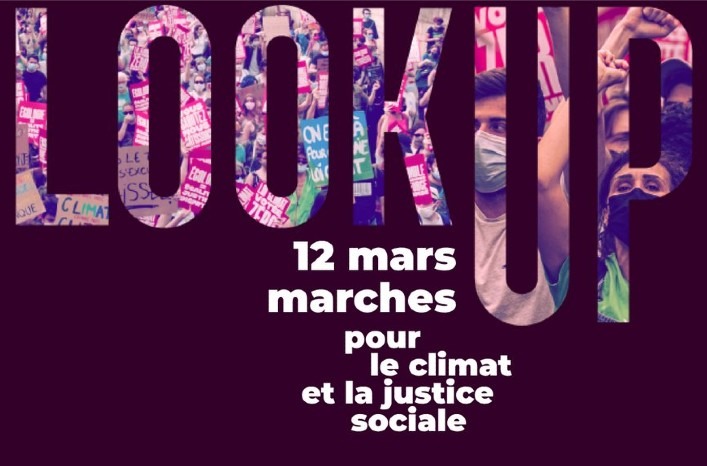 It’s one of Netflix’s biggest hits. The film Don’t Look Up, an allegory of climate change, has just been nominated for an Oscar in the most prestigious category, that of best film. A symbol of size while this satire has become in a few weeks a rallying sign for the marches for the climate. That of March 12 organized in France was baptized “Marche Look Up” for the occasion.

“Don’t Look Up: Cosmic Denial” might just win the most coveted Oscar statuette. The film, which has become cult for climate activists, has just been nominated in the category of best film. If the prestigious casting of this satire composed among others of Meryl Streep, Leonardo DiCaprio, Jennifer Lawrence, or even Cate Blanchett, undoubtedly allowed the film to find a place of choice in Hollywood, it is also the strength of the scenario, mirror distorting our reality, which hoisted him to the Oscars. Just a month after it aired on December 24, it became Netflix’s second most viewed film.

It must be said that he hit the nail on the head by casting a harsh light on the cynicism of politicians and the media in the face of a danger threatening the survival of humanity. And for good reason, while two American astronomers discover that a comet is heading straight for Earth with an impact expected in six months, the alerts they issue find no echo. An allegory of the fight against climate change. “Scientists predicted the effects of climate change that we are now experiencing years ago. We must listen to scientists and take the necessary steps to mitigate the crisis,” wrote on Twitter the committed actor, Leonardo DiCaprio.

Years ago, scientists predicted the damaging effects of climate change that we’re now experiencing. We must listen to scientists and take the necessary steps to mitigate the crisis. #DontLookUp https://t.co/AvaMRiF1T5

“The film illustrates the society of entertainment and consumption, the way certain media operate, the disinformation which unfortunately spreads faster than solidly established knowledge”, adds the climatologist and member of the IPCC, Valérie Masson-Delmotte. And precisely, in the middle of the presidential campaign, when security, immigration and purchasing power occupy a prominent place in the debates, the question of the climate is struggling to emerge. Hence the platform, signed by nearly 1,400 scientists on February 1 on France Info, calling for the climate and biodiversity to be at the top of the climate and media agenda.

“The media seem to fear that it is not interesting, that it is scary, that it is complicated”, explains to Novethic, Magali Reghezza, lecturer in geography at the École Normale Supérieure, and signatory of the appeal. And scientists are not the only ones who want to raise the subject. Seizing the reference “Don’t look up”, the NGOs are organizing a march for the climate and social justice on March 12 with the keyword: #MarcheLookUp.

“The success of the film “Don’t Look Up”, which draws an obvious parallel with climate change, has brought several major issues back into the public debate. We must remind them of the order of priorities and make 2022 the year when France has finally taken the path of a fair and sustainable future for all”, advance Alternatiba. On social networks, NGOs call on those for whom the film was an electric shock to join the ranks of the March 12 march. Who knows if the mobilization of civil society, totally non-existent in the film Don’t Look Up, can change not the trajectory of the comet, but that of a warming limited to 1.5°C?

From the Marches for the climate to the Oscars, an electroshock film that has become essential