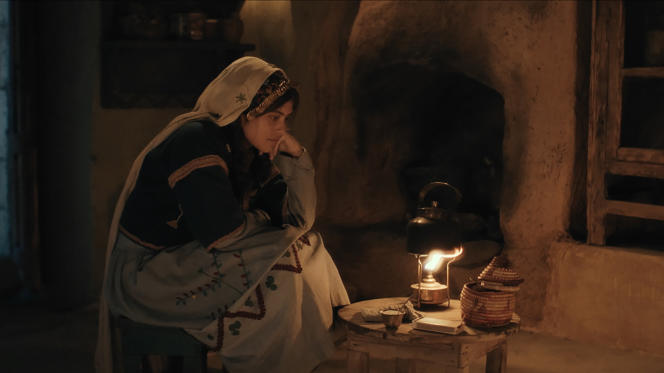 The main scene of the movie Farhafreezing, lasts about twenty minutes. A Palestinian family comes to find refuge in the courtyard of a house, the mother gives birth to a little boy. Outside, the war is raging: we are in 1948, shortly before or shortly after the proclamation of the State of Israel, at the time of the Nakba, when more than 700,000 Palestinians are forced to exodus by armed Zionist militias . Israeli soldiers burst in, discover the family. Within minutes, in cold blood, they shot the parents and their two daughters. The infant is left to bawl until exhaustion; the young soldier in charge of executing it disobeys at the last moment. Hidden behind the wooden planks of the pantry door, the heroine, Farha, sees everything – and the viewer is plunged into horror with her.

Director Darin Sallam, who signs her first film here, claims to have been inspired by real events. Historians have documented crimes committed by Zionist militias; some have even demonstrated, with supporting archives, that they were not the result of isolated blunders but had been planned to help the creation of Israel in 1948. In Israel, the subject, which touches on the very roots of the ‘state, is taboo. The official version is that the Zionist fighters just defended themselves against the Arab armies that threatened the country’s existence. Farha is the first fiction to bring a Palestinian narrative of the Nakba to the big screen. With a certain striking power: the film will represent Jordan at the 2023 Oscars and was released on Netflix on 1er December.

The Israelis tried to limit its distribution. At the end of November, when the director claims to receive threats and insults on social networks, Internet users call to unsubscribe from Netflix. The film team denounced a vast campaign orchestrated by hundreds of people in order to lower the rating of Farha on the IMDb referencing site. “These attempts to silence our voices as Arab Semites and as women filmmakers, to dehumanize us and prevent us from telling our own stories, our narrative and our truth run counter to freedom of expression”she was indignant on Instagram.

“This denial serves to perpetuate the oppression and murder of Palestinians. » Rachel Beitarie, director of Zochrot

The authorities got involved, lobbying to cancel the screening of Farha at the Al Saraya Arab Theater in Jaffa. In vain. “That an Israeli theater offers its stage to lies and defamation is shameful,” declared, without having seen the film, the Minister of Culture, Chili Tropper. He pushed Finance Minister Avigdor Lieberman to call for Al Saraya’s state subsidies to be suspended – they make up around half of the theater’s budget. “There is no room for slander of soldiers” israeli, added Mr. Lieberman, known for his anti-Arab diatribes. “We have the right to freedom of artistic creation”replied the organizers.

You have 51.12% of this article left to read. The following is for subscribers only.

In Israel, calls to censor a film on the crimes of the Nakba