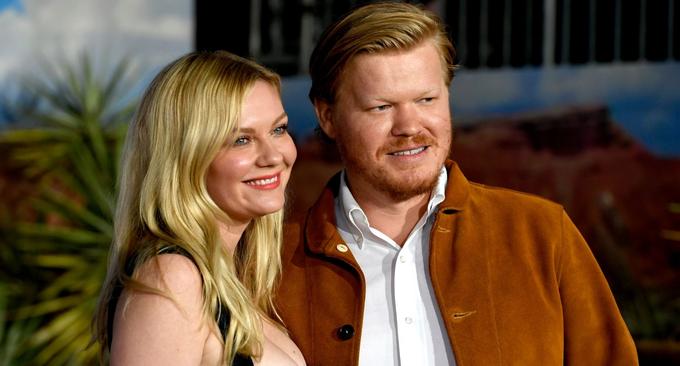 Together for five years, the two actors both received their first Oscar nominations on February 8 for their roles as husband and wife in The Power of the Dog. The opportunity to return to the origins of a Hollywood romance.

Kirsten Dunst and Jesse Plemons dance the waltz, perched on top of a mountain. Both play Rose and George Burbank in The Power of the Dog (2021), by Jane Campion, available on Netflix since December 1, 2021. “It’s so good not to be alone”, slips George in the middle of this dreamlike painting. A performance so overwhelming that his on-screen partner will shed a few tears, away from the cameras. The chemistry between the two actors has once again operated.

This did not escape the Academy of Oscars, which offered the couple, on February 8, nominations in the categories best supporting male and female roles, the first for both of them, for the prestigious ceremony, organized on March 28. “To be honored by the Academy is a real lesson in humility, reacted Kirsten Dunst. For Jesse and I, receiving our first nominations together is beyond our wildest dreams.” A dream that the duo would not have dared to formulate five years earlier, at the beginning of their Hollywood romance.

“I knew he would stay in my life”

It all starts with an exchange of glances, in a queue at Los Angeles airport, in 2015. Jesse Plemons immediately falls in love with Kirsten Dunst, with whom he is about to shoot season 2 of Fargo, in Canada. “I looked her in the eyes, and I saw how he was a beautiful, gentle, spontaneous and warm person“, he will confide to vulnerability, four years later. Love at first sight is professional first. “We fell in love as actors,” the actress says today. At the time, Kirsten Dunst is indeed in a relationship with Garrett Hedlund, hero of Tron: Legacysince 2011.

To escape boredom on Canadian soil, the 30-year-old watches, in the privacy of her home in Calgary, episodes of the series Friday Night Lights, in which Jesse Plemons officiates. And marvels at the talent of his on-screen partner. On the set of Fargo, the two actors have fun, madly. “I knew he would stay in my life, remembers Kirsten Dunst in the Wear Edit, in 2019. I still did not know to what extent. At the end of the show, I missed him terribly. We didn’t see each other again until the following year.

In video, “The Power of the Dog”, the trailer

In 2016, Kirsten Dunst, who has just separated from Garrett Hedlund, can count on the support of this “very good friend”. Her relationship with Jesse Plemons takes a new turn in June, when paparazzi immortalize one of their first kisses. Then, everything accelerates. Six months later, Kirsten Dunst, seated with her family during the Christmas holidays, detects a certain nervousness in her father’s attitude.

“He doesn’t know how to lie”, she will have fun in Jimmy Fallon’s “Tonight Show”. The 39-year-old actress is certain: her 33-year-old companion is about to ask her to marry him. In January 2017, US Weekly confirms that the couple are engaged. A year later, Kirsten Dunst appears in a Rodarte advertising campaign, wearing a red floral dress, her two hands resting on her rounded belly. Her baby boy, Ennis, was born on May 8, 2018.

A marriage on hold

If the friendship between the actress and Jesse Plemons has given way to an intense and dazzling romance, the two actors are less impetuous in the organization of their marriage. “We will definitely get married one day, but it will probably be a small ceremony at home, or something really intimate, not a big wedding, explains Kirsten Dunst in the columns ofUS Weekly, in August 2019. It’s a priority, but you know how it is. There are lots of little things that interfere. So it has to be a good time where we can all have fun.”

In March 2021, another piece of news disrupted the organization of the ceremony. Kirsten Dunst thus appears in a new Rodarte advertising campaign, wearing a transparent white dress that highlights… her second baby bump. The shooting is signed Sofia Coppola, who had directed it in Virgin Suicides Where Marie Antoinette. And Kirsten Dunst has no desire to celebrate her marriage under these conditions. “I wanted to have fun, not pay for everyone to have a good time while I’m pregnant and waddle down the aisle,” she joked in the Sunday Times, to the evocation of his future union. James, the son of Jesse Plemons and Kirsten Dunst, is born in September 2021. To date, the two actors are still not married.

In public, the two actors are full of praise for each other. In August 2019, Jesse Plemons saluted the talent of his future wife during the inauguration of his star on the Hollywood Walk of Fame. “Besides you being a brilliant actress, I had the even greater pleasure of getting to know you outside of work, Kiki or Keeks (the nicknames of the actress, editor’s note), he said during his speech, during which the couple made their first appearance as a family. The kind of mother, wife, daughter, sister, friend and sidekick you are is why I, all your friends and everyone here loves you so much.”

On January 20, Kirsten Dunst also pays a humorous tribute, on her Instagram account, to this companion who supports her when their sons wake her up at 5 a.m. and this, “two nights in a row”. Asked by the New York Times, the actress also celebrates her partner’s hard work. “He takes everything very seriously and is deeply involved,” she says. To the point that the actress is already dreaming of her next project with the one she now designates as “her favorite actor”.

Love at first sight in Hollywood: Jesse Plemons and Kirsten Dunst, a united couple in the race for the Oscars