The 94th Academy Awards have come to an end and as in 2021, streaming platforms have once again won in the main categories.

In 2021, after an unprecedented industry upheaval, Netflix totaled more than 40 Oscar nominations across all films. If the streaming giant had “only” 27 citations this year, it was still omnipresent in the main categories, with 12 nominations for The Power of the Dog alone. But ultimately, only its director Jane Campion was honored with the Oscar for best directionbecoming the third woman in history to lift the much-prized golden statuette after Kathryn Bigelow and Chloé Zhao.

Benedict Cumerbatch, also nominated for The Power of the Dog

As for the best film, Apple TV+ won with CODA, the american remake of The Aries Family, which won Best Picture, leaving the magnificent West Side Story on the sidelines. Steven Spielberg’s new masterpiece was present in seven categories, but only actress Ariana DeBose took the stage to receive the award for best supporting actress.

The director and screenwriter of Coda, Sian Heder was awarded for best adapted screenplay, while Troy Kotsur was crowned best actor in a supporting role. He thus became the first Oscar-winning deaf actor. 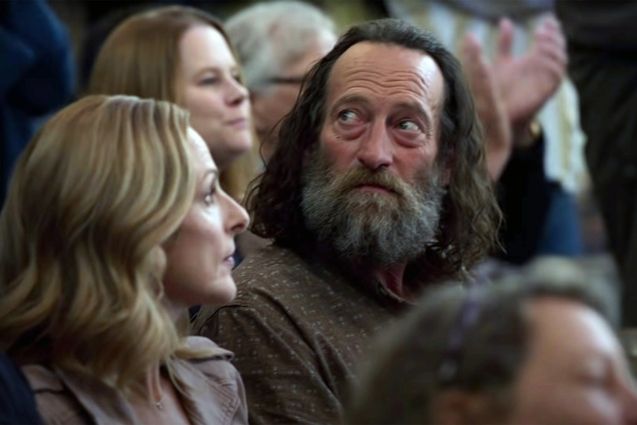 Disney also had its share of the cake with the biopic In the Eyes of Tammy Faye, for which Jessica Chastain was crowned best actressstyling at the post Kristen Stewart who was however favorite with the biopic spencerthe latter having left empty-handed this edition just like Licorice Pizza by Paul Thomas Anderson and Nightmare Alley by Guillermo del Toro. Only category in which he had a chance, cruella was rewarded for his costumes.

Last year, the prize for best animated film was awarded to Drunk, a Disney and Pixar co-production. This year again, Disney was overrepresented in its favorite category with Luke, Raya and the last dragon and Encanto – the Fantastic Madrigal Familywho therefore won the statuette and left its main competitor, The Mitchells vs. the Machineson the tile.

This edition hosted by Amy Schumer, Regina Hall and Wanda Sykes marked a certain return to normal for the course of this 94th ceremony, but its reunion in rhinestones and sequins was enamelled by will smith’s blood stroke, who took to the stage to give an unscripted shoutout to comedian Chris Rock after the latter mocked his wife Jada Pinkett Smith’s alopecia. In the end, the actor returned to the stage and issued a tearful apology after receiving the best actor statuette for his role in The Williams Method. What put into perspective the embarrassing lifting of Marie’s dress infiltrates the last Caesars.

What happened between Will Smith and Chris Rock there? ???? #Oscars pic.twitter.com/lYznPBZyd0

If it did not win the prize for best film, the sumptuous drive my car was, however, unsurprisingly voted Best International Filmafter winning the screenplay award when it was presented at the 2021 Cannes Film Festival. Snubbed in the main categories, dune nevertheless imposed itself in the technical categories by winning the prizes for the best editing, the best photography, the best sets, the best music (composed by Hans Zimmer), the best visual effects and finally the best sound editing. The film directed by Denis Villeneuve was thus the most rewarded of this edition.

Finally, the public prize, for which people could vote on Twitter, was awarded to the Netflix film Army of the Dead by Zack Snyder, surpassing Spider-Man: No Way Home and Cinderellathe other two favorites in this new category that will surely cause less ink and tears to flow than the slap in the face of Will Smith.

Best Director – Jane Campion for Power of the Dog

Best Actress – Jessica Chastain for In the Eyes of Tammy Faye

Best Actor – Will Smith for The Williams Method

Best Documentary – Summer of Soul (…Or, When the Revolution Could Not Be Televised)

Best Original Song – No Time To Die by Dying Can Wait

Oscars 2022: first coronations for Apple with Coda which surpasses Netflix and The Power of the Dog