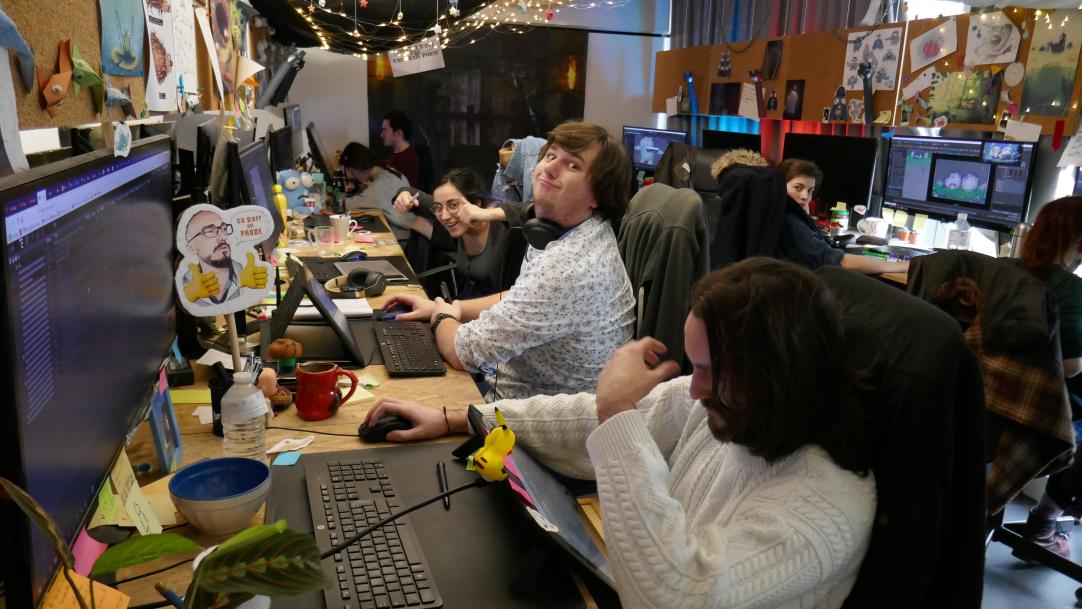 For their last year of studies at ESMA in Nantes, Nicolas, Louise, Yasmine, Mélanie, Maxime and Léo worked on an animated short film. “I am a pebble” has traveled, crossed the Atlantic to become eligible for the 2022 Oscars. The students, who have become young graduates, tell how they got there.

They will not walk the red carpet under the flashes of the cameras, nor will they be waiting for the results, between stress and excitement, no, this Sunday March 27, the six former students of ESMA (Higher School of Artistic Professions) and directors of the animated film “I am a pebble” won’t make it to the Oscars. However, it came close…

An animated film as a study project

It all started in 2019. The small promotion then completed its third year at ESMA in Nantes. In September, they will begin their very last year of studies in 3D animation.

A whole year devoted to making an animated film. And these 12 months will not be too much to make a seven-minute short film. “From the end of the third year, we thought about this end-of-studies project. Everyone must imagine a scenario in the form of a pitch then the teachers choose those who will be selected, specifies Yasmine Bresson, 27 years old. Then, we made our wishes, depending on the projects we prefer and we were divided into groups.”

On the initiative of “I am a pebble”, Maxime Le Chapelain. His idea of ​​making an otter his main character appealed to several students. “I immediately liked it and I started to co-write the screenplay”continues the young graduate.

Léo Coulombier, 24, had also put “I am a rock” in his preferences for the poetic side of the film. More attracted by the coding, programming part and less by the drawing that he “masters less than Yasmine for example”, the student very quickly finds his place in the team. “The teachers also divided us according to characters and our skills,” he says.

After the script, the six students quickly agree on the atmosphere they want to create. “We wanted a painting effect, something different, that the visual support the story since this otter is in search of identity, it had to be blurred in the drawing”, explains Yasmine.

If the idea is there, it had to be put into practice thanks to software. It is precisely Leo, among others, who sticks to it. According to Yasmin, the project is therefore also created gradually, depending on what is technically possible. “I created a whole algorithm for this effect, explains Léo. At school, we learn the basics but the project is an opportunity to do something for us, to get out of our comfort zone.“

Behind a short film, a whole team work

Finished the layers, the drawings on boards, to make an animated film, the computer is an indispensable tool. “It’s true that it’s not very sexy to know that we spend our time behind a desk”, recognizes Yasmine.

The student still first presented the scenario in the form of animatics : a sequence of drawings which allows in particular to evaluate the time of the short film. Then follows a sleight of hand between the members of the team, each more comfortable on certain techniques learned during their years of study such as lighting, compositing, texturing, rendering, modeling, rigging…

If the teachers are present to accompany them in their project, students “self-manage” completely with schedules, “Excel spreadsheets, checkboxes, deadlines” as well as a touch of stress and fatigue… Even if the two graduates say so, the project was carried out in the right atmosphere. “Group cohesion is very important. The teachers told us, it’s a marathon so we didn’t want to exhaust ourselves on the task“, recalls Leo.

Several months later, the result is there. Bulle, the little otter, has indeed taken shape. “She lost her parents, she tries to throw her family into rocks but she realizes that she may not really belong. The message behind it is to accept your family as it is.“, summarizes Leo.

The film leaves several possible interpretations. A desire made possible by the absence of dialogue. “The most difficult thing was to make this pebble empathic, without any words“, admits Yasmine. “We really struggled on this voice-over, whether we had to put one in or not, we turned against the teachers, we were afraid that it would break our thing”, adds Léo.

Different choices which may have earned them the right to be noticed when the film was released at the end of 2020. On the counter, dozens and dozens of nominations in different festivals. Until obtaining some prizes and in particular that of the HollyShorts film festival which, without their knowing it, automatically allows them to be eligible for the Oscars.

“It stopped there, but it’s already super rare to have an eligible student project so we’re super happy,” says Yasmine. This race for the nomination, the team does not even seem to be really looking for it. “We were surprised. It’s the icing on the cake, we don’t think about it when we make the film. We think it’s good, the film goes around the world. But whether we have prizes or not… it doesn’t really affect me. I rather remember the good times spent and I am proud of this project“, says Leo.

As for knowing if the film could have been a springboard to enter the world of work… the two graduates affirm it, they did not need it. “It’s a small community, everyone knows each other, it’s the network that counts. We know how everyone works and we help each other,” says Yasmine, who now works in Montpellier where she continues to lead short film and video game projects, like Léo, very happy to go from player to designer. Video games are therefore another way out for these graduates. Like what, it’s not just the Oscars that count!

Oscars: the animation student film very close to a selection