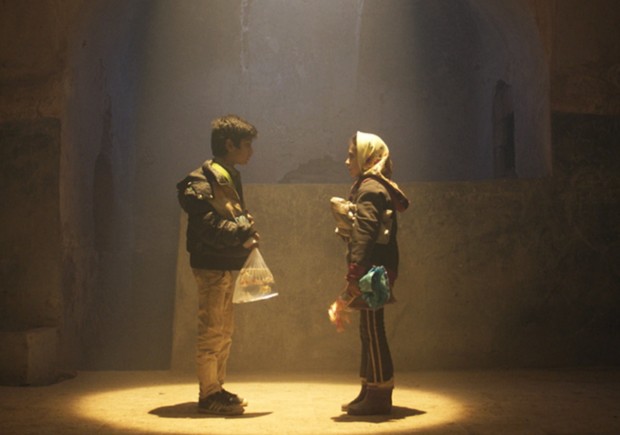 08/12/2022 – This film by Hassan Nazer follows a young Afghan refugee in a remote area of ​​Iran, where he miraculously finds himself in possession of the statuette won by Asghar Farhadi at the Oscars in 2017

All those movie trophies, where are they really going? We see the artists hugging them tightly in their hands on lit stages, and at official photocalls right after, but never again after that. The Iranian director settled in Scotland Hassan Nazer shrewdly gauges the significance of the physical object of a film award, especially to the film industry of his motherland (where fervor for cinema and a culture of political repression continue to collide), in Winners, his second feature film, entirely financed in the UK but shot on location in his home town, Garmsar, with local actors. The film shows an Iran (rural and urban) gaga for cinema, but unable to fully recognize it or show it publicly without fear of the consequences. The abandoned, now homeless Oscars and Silver Bears driving the plot, moving from character to character as if they were worthless barter items, are the perfect metaphor for what Iranian filmmakers usually have to endure after being raved about on the festival circuit. The film had its world premiere at this year’s Edinburgh Film Festival, where it scooped the Audience Award, and is now gaining exposure at home after being selected as the UK Oscar nominee for best international film (read thearticle).

By designing Winners, Nasser wanted to break away from the typical tone and tenor of recent Iranian films, while maintaining the authenticity that comes naturally from his heritage, but giving it what he calls a more “European” sensibility as a counterpoint. This occurs mainly through more fantastical aspects (the idea of ​​a wish come true) which departs from the realism with which Iranian cinema is intimately associated. Winners is a speculative story, granting its main characters the poetic justice that a more plausible narrative might deny them, while nurturing a melancholy that adds to the film’s utterly current element – ​​the film alludes heavily to persecution which Jafar Panahi is currently undergoing at the hands of the State.

Winners initially focuses on Yahya (Parsa Magari), a pre-adolescent Afghan refugee who lives sparsely in Padeh, in a desert area in the north of the country. A precocious cinephile, he finds himself without realizing it, on the way to school, with the Oscar won by Asghar Farhadi in 2017 for The customer [+lire aussi :
critique
bande-annonce
fiche film], placed in the wrong place by a postal worker responsible for keeping it safe until it is reunited with its proper owner (who was denied the right to attend the ceremony that year, after the decree immigration campaign targeting Muslim countries instigated by Trump at the start of his disastrous presidency). The fate of the Oscar, which Yahya and her friend Layla (Helia Mohammadkhani) not recognized for what he is, is gradually stripped of his importance throughout the plot as interest shifts to Nasser Khan (Reza Naji) and his assistant Saber (Hossein Abedini), two junkyards who employ local schoolchildren to rummage through the local dump. The fact that this activity is portrayed as a joyful and adventurous ritual for children is another reminder that we live in a world a little detached from reality.

If the film struggles to help the viewer suspend his credulity, it allows the very artifice of its device to generate relevant observations on Iranian cinematographic culture by avoiding all the platitudes on the famous “power of cinema”. Real figures appear and gradually reveal themselves during the story, but one can only ever exist in a dream, with this director.

From the Goonies to the Golden Globes, look back at the miraculous resurrection of Ke Huy Quan
Where to see the films nominated for the 2022 Oscars?
DVD releases March 2022: César and Oscars specials! (Cinema / DVD) - MaXoE
Tweet
Share
Share
Pin
Other links: https://awardworld.net/resources/