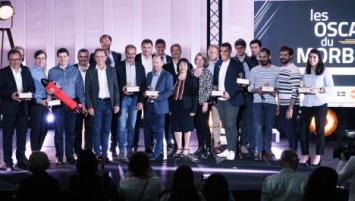 Hear applause and warm laughter: the 250 people present last night at the headquarters of Crédit Agricole du Morbihan, in Vannes, enjoyed this reunion during the Morbihan Oscars evening, an event which had to suspend two editions due to the pandemic . Last night, the organizers and partners of the Morbihan Oscars rewarded 8 companies, including 4 innovative startups and 4 successful SMEs/ETIs. Here are the 2022 winners!

“Morbihan companies are doing well and are carrying the department high“said Gaëlle Favennec, vice-president of the Morbihan Departmental Council, partner for the first time of the Morbihan Oscars, several times.

Historically organized by the CCI of Morbihan, Crédit Agricole du Morbihan, the Order of Chartered Accountants of Brittany and the Union of Medef companies in Morbihan, the event to promote local companies is also supported by Lorient Technopole, Bretagne Commerce International , Vipe, event companies MTW and Happening. A pool of partners all committed to supporting businesses and innovation.

For this 4th edition of the Morbihan Oscars, this jury therefore rewarded 4 young companies or start-ups that innovate and contribute to the dynamism of the departmentas well as 4 remarkable companies highlighting their success, their spirit of initiative and their involvement in the development of the territory.

In the “Noted Startups” category, the 4 winners are

1. WizeWater in Vannes // Social and Societal Innovation Startup Prize. Created in April 2021, this young company hosted at Village by CA in Morbihan is developing a connected solution to monitor and manage water levels in real time. Its applications are multiple: rainwater, irrigation water, water reserve, sanitation.

2. Seaber in Lorient // B to B startup prize. Industrial start-up founded at the end of 2020 in Lorient and specialized in the design and mass production of underwater drones for oceanographic studies and research.

3. Maison Hädenn in Vannes // B to C startup award. Julia du Sartel, founder of Maison Hädenn, invented shampoo powder to be diluted at home, a natural and sustainable alternative, and above all zero waste. The formula is composed of 100% natural, organic, vegan and Breton active ingredients, certifies the designer who is therefore launching this ecological and eco-responsible brand.

In the “Remarkable companies” category, the 4 winners are

1. SAS Le Garrec in Le Sourn // Growth Prize. A family business created in 1979 by Michel Le Garrec, Le Garrec has become over the years a major player in the development of fluid processes for the agri-food, animal nutrition, environment and petrochemical sectors. . Since 2003, the company has been managed by Steven Le Garrec and has around fifty employees.

2. BCF Life Sciences at Pleucadeuc // International Development Prize. Founded in 1986, BCF Life Sciences is a French producer of natural amino acids, extracted mainly from poultry feathers. The company, which has 180 employees at its production site in Pleucadeuc, generates 60% of its turnover internationally. BCF Life Sciences products are marketed by major names in the pharmaceutical, dietary supplement and infant nutrition industries. The company is chaired by Jacques Pidoux, also SME/ETI referent and president of the Club des Entrepreneurs France.

3. Le Minor in Guidel // Social and Societal Innovation Prize. The historic Le Minor hosiery, created in 1922, was taken over in 2018 by Jérôme Permingeat and Sylvain Flet. The two entrepreneurs have kept and developed the flagship activity and values ​​of this renowned industry: the manufacture in Brittany of clothing inspired by the marine world for men, women and children. The Breton brand, which employs 62 people, is experiencing a new revival thanks, in particular, to the modernization of the production site and the creation of a dedicated training sector.

4. Baxter – Hillrom at Pluvigner // Special Jury Prize. Last September, Baxter International acquired the Hillrom group. The transaction took place in the United States but with repercussions across the Atlantic and in Pluvigner, precisely where the French headquarters of the Hillrom multinational, world leader in medical technology, is located. More than 400 people work on the Morbihan site, which specializes in the manufacture of medical beds and rooms. During the recent pandemic, the local company mobilized to almost double its production, delivering 53,000 beds in one year. The Pluvigner industrial site exports 80% of its production, mainly to Europe.

The Morbihan Oscars reward 8 remarkable companies in the department