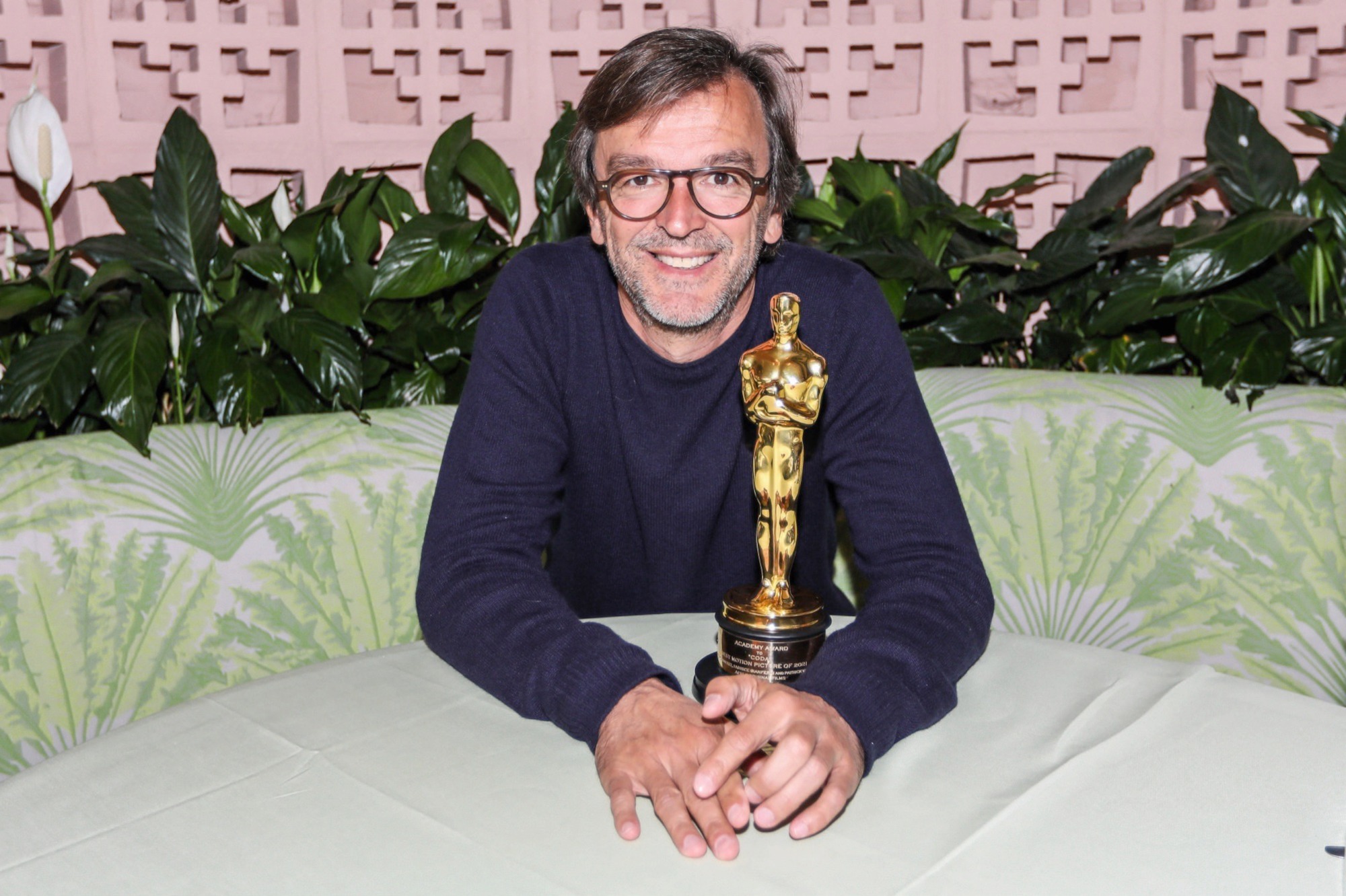 Since “Coda”, the American adaptation of “The Bélier family”, triumphed with three Oscars, Philippe Rousselet has not let go of his statuette

Will Smith’s donut failed to spoil the party. “At the time, I didn’t really understand what had happened. At first, we all thought it was a set-up, then we understood. It threw a chill. It’s a shame because it was a very nice evening, very joyful. But the show quickly took over. When I got on stage, it was magical. “The whole evening, Philippe Rousselet spent it with his statuette in his hand. “It’s heavy, but I didn’t want to let it go,” he told us, making us weigh it: estimate… 5 kilos. ” I still have trouble believing it ! »

Not everything was easy in the life of the son of André Rousselet, founder of Canal+, who died in 2016. “If he had been there, he would have been happy and relieved for his son, he tells us. Because I come from very, very far away… I did all the stupid things imaginable, at the beginning of my career, as much for lack of experience as for enthusiasm. »

Philippe Rousselet, 53, grew up in Neuilly-sur-Seine, in a beautiful apartment, in the shadow of François Mitterrand, of whom his father was a close friend. The latter was his chief of staff at the Élysée, in 1982, after having been his deputy chief of staff at the Ministry of the Interior, under Pierre Mendès France, in 1954… As a child, he was one of the few to know the existence of Mazarine, but there is obviously no question of talking about it to anyone. “Secrecy is an important value in my family,” he smiles modestly. It’s always like that. The stars of TV, cinema and politics parade at the house, but it would take more to take the big head: at the Rousselets, we have discreet elegance.

Dissipated student at school, he did not even get his bac (“not to repeat to my children”, he says) while his brother, Nicolas, who entered HEC, took over the reins of the family business, the G7 taxi company. Philippe spends more time in cinemas, his great passion, than in classrooms. From the age of 14, he knew he wanted to become a producer, because he understood very early that acting was not for him. “I started out in the business thanks to Terry Semel, the boss of Warner, who didn’t blame me for having won a tennis match against him, in the South, and asked me to join him. to do an internship. At 21, Philippe set sail for the United States. He worked for five years in an American studio and then created his own production company.

But he has a problem: he’s a nice guy. He loves beautiful human and family stories. Philippe Rousselet has a soft voice and a courteous handshake. He doesn’t have a Harvey Weinstein chat. He’s too well brought up for this killer milieu. In the United States, it is considered almost suspicious. “A lot of people have been slow to believe in me,” he says. His address book and his passion compensate. He takes all the risks. In 2005, he produced “Lord of War”, with Nicolas Cage. The starting budget is $25 million. “I was not leading off, he says today. It was unconscious! I should have told myself from the outset that this film was going to cost 55 million. At the same time, it’s when you know the risks that you end up not taking any more…” Fortunately, the box office exploded. This is his first big American success.

In 2012, he teamed up with a small French production company which had an original project in its pipeline, the story of a family of deaf-mutes, the Bélier. The film will pulverize entries in France and its heroine, Louane Emera, win the César for best female hope in 2015. Proposals for adaptation abroad flock after this success, but Philippe Rousselet prefers to produce the remake himself in English, “so as not to damage this pretty story”. With his associates, Patrick Wachsberger and Fabrice Gianfermi, he goes on the hunt for a screenplay. Sian Heder, American director born near Boston, who was also awarded an Oscar last Sunday, offers him a very personal project that seduces him. She sets the action in the fishing community of Massachusetts, where she grew up and spent all her vacations. This time, it’s about turning deaf actors. A big risk: this choice obliges these many subtitlings which put off the public.

To attract this one, we decide to take a big name from Hollywood; but, during the audition, it is a stranger who impresses: Troy Kotsur. He is a character. Born in the suburbs of Phoenix, Arizona, which he never left, he managed to get into the cinema in the 1980s despite the opposition of his parents, convinced that Hollywood was not ready to accept actors of his condition (they weren’t necessarily wrong). “Troy was a no-brainer for the film. As a fisherman, he was stunning. He has a refreshing charisma, nothing is calculated about him and it feels good. His gesture is very visual. In the scene where he explains to his daughter and her boyfriend that they have to use a condom, there is no need for dialogue, it works very well with the signs. Troy is my greatest pride: on the set, I secretly dreamed of an Oscar for him. The fact that he got it is extraordinary. He is a star! »

The folks at Apple have done some terrific groundwork

A six-week shoot begins, which language constraints make difficult. Emilia Jones, the main actress, who is not deaf, spends eight months learning sign language while taking singing lessons. A colossal job. The budget is tight – $15 million, which is a lot for an American independent film but still far below its Oscar rivals. The Covid complicates everything. Post-production was supposed to take place in Canada, but the borders are closing, everything has to be repatriated to Los Angeles. In June 2020, the film is finally edited and ready to be released, but it still has to be sold abroad, especially… in the United States! But movie theaters are closed. We are going to “put it on a shelf” for six months, the time it will be presented at the Sundance festival, specializing in independent films, hoping that its organizers will choose it. Fortunately, the big bosses of Apple TV read the script and, without even seeing the final result on the big screen, bought the distribution rights. They put $25 million on the table.

At Sundance, “Coda” is the subject of a “bidding war” (auction) with the two major streaming platforms, Amazon and Netflix, which offer roughly the same amount. “It was the king’s choice,” smiles Philippe Rousselet today. He explains that he chose Apple “because, in the field of cinema, it’s a start-up; we knew that, for them, “Coda” would not be just another film”. Passionate, Tim Cook, the CEO of the apple brand, even believes that it is essential to the image he wants to develop in Hollywood. Celebrated at the Sundance festival, “Coda” is launched on the streaming platform on August 13, 2021. As with “The Aries family”, word of mouth works. “The people at Apple have done tremendous work on the ground,” notes Philippe Rousselet. They multiplied previews, panels and press interviews, remaining extremely faithful to the spirit of the film. A real six-month presidential campaign! Where, for active promotion, the studios are content with a few weeks. »

My father never gave me advice but, in difficult times, he was always there and said to me: “Go for it!”

By superstition, Philippe Rousselet camped for three weeks at the Beverly Hills Hotel, where he has good professional memories of the time when he learned the trade with Terry Semel. A wise choice: impossible to take a step without meeting a star. During our interview, the day after the ceremony which had seen “Coda” win three Oscars – best picture, best adapted screenplay, best supporting actor – actor Andrew Garfield, nominated the day before but unhappy, admired with a touch of envy the statuette that Philippe never let go. Philippe Rousselet had slept only three hours.

Until 5 a.m., he had danced at the party given by Beyoncé and Jay-Z. But he was awake enough to see director John Landis (“The Blues Brothers,” among others) come over to shake his hand and congratulate him. It was in the home stretch, after an exhausting marathon, that the producer managed to beat Jane Campion, the director of “Power of Dog”, initially awarded for the Oscar for best film. It was then necessary to submit to the drastic protocol imposed by the Academy of Oscars in the face of Covid: two tests per day… “Until the trend reversal, ten days ago, I was in a very comfort of the challenger, but then we started to say to ourselves: “This Oscar, we have to win it, otherwise we will be called losers!” »

Even if he says he is surprised, and beyond, and even if he admits not quite believing it yet, Philippe Rousselet had brought his four children, aged 17 to 28, for the big day. look to the past. To this father who had never placed the weight of filiation on his shoulders, but who had passed on to him a taste for risk and entrepreneurship. “He never gave me advice but, in difficult times, he was always there and said to me: ‘Go for it!’ In 1993, he asked me to accompany him to New York where he received an Emmy Award. Almost thirty years later, I do the same with my own children. In both cases, it will remain a magical memory. »

The triumph of “Coda” at the Oscars – Philippe Rousselet: “On stage, it was magic”