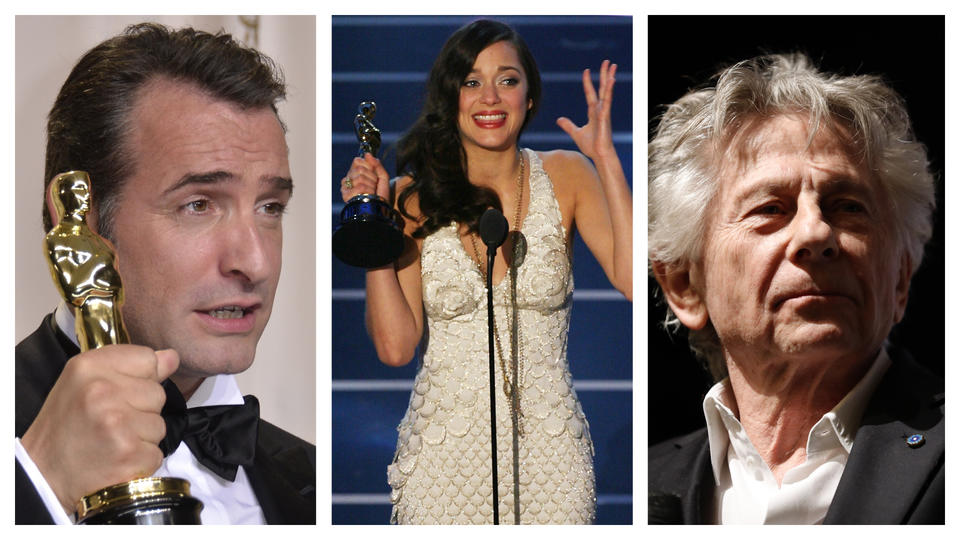 While playwright and writer Florian Zeller won the Oscar for best adaptation on Sunday for his first film “The Father”, some of his compatriots had already achieved this feat. A look back at these French people who managed to find a place for themselves in Hollywood and won a precious statuette.

In 2012, the film “The Artist” by Michel Hazanavicius won five statuettes, including the Oscar for best film (the only French feature film to have ever obtained it), that of best director, and that of best actor for Jean Dujardin (also a first) for his role as George Valentin, a silent film star in the 1920s who fell into oblivion after the arrival of talkies. “If George Valentin could speak, he would say:” Damn, great, thank you, great “”, launched the French actor when receiving his award, adding in introduction “I love your country”. Her on-screen partner, Bérénice Béjo, did not get the Oscar for best actress in a supporting role, but won a César.

It was in 2008 that Marion Cotillard was awarded the Oscar for best actress, for her portrayal of Edith Piaf in the film “La Môme” by Olivier Dahan. She previously obtained the Bafta and the César for best actress for this role. Guillaume Canet’s companion worked for months on this character, learning about the artist’s life, and taking intensive singing lessons. The actress even felt “haunted” by the singer, even years after the shooting. “I did exorcism with salt and fire. I went to Bora Bora to escape him. I went to Machu Picchu in Peru and performed ancient shamanic ceremonies to cleanse myself, before realizing why I couldn’t let her go. She had been abandoned as a child. Her biggest fear was being alone,” she told The Observer in 2014.

Before Marion Cotillard, and after Claudette Colbert (“New York-Miami”, 1935), Hollywood was amazed by the talent of Simone Signoret. Already crowned with the prize for female interpretation at the Cannes Film Festival in 1959, the one who shared the life of actor Yves Montand received the Oscar for best actress the following year for her role in “Les Chemins de la haute ville by Jack Clayton. In 1966, Simone Signoret received a nomination for her performance in Stanley Kramer’s feature film “La nave des fous”.

Directed by Anthony Minghella, “The English Patient” won no less than nine Oscars in 1997, and the ceremony saw the coronation of a Frenchwoman: Juliette Binoche. The actress is indeed awarded the Oscar for best actress in a supporting role, after Lila Kedrova for “Zorba the Greek” released in 1964. In an interview with The Guardian in 2016, she confided: “The success of this movie was breathtaking, (…) I saw it again not too long ago, and it’s definitely one of my favorites”. In 2000, Juliette Binoche was again nominated for an Oscar, this time in the “best actress” category for her participation in the romantic comedy “Le chocolat”, with Johnny Depp.

Before being persona non grata and excluded in August 2020 from the prestigious Academy of Cinema Arts and Sciences, the Franco-Polish director was crowned at the Oscars in 2003 for the historical drama “The Pianist” inspired by a true story. . The film, which also won seven Césars, had been awarded the Palme d’Or at the Cannes Film Festival the previous year.

The French composer Alexandre Desplat has been nominated eleven times for the Oscars. A trophy he won in 2018 for the best music for the film “The Shape of Water” by Guillermo del Toro. He won his first Oscar in 2015 for the soundtrack of “The Grand Budapest Hotel” by Wes Anderson. In 2020, the composer had again been nominated for “The Daughters of Doctor March” by Greta Gerwig. But he left empty-handed. Alexandre Desplat has joined the very closed circle of award-winning French composers in Hollywood, including Michel Legrand, Maurice Jarre and George Delerue.

With his romance “A man and a woman” which starred Anouk Aimée and Jean-Louis Trintignant, director Claude Lelouch won the Oscar for best screenplay and best foreign film. In this category, other French people have distinguished themselves such as René Clément for “Beyond the gates” (1951) and “Forbidden games” (1953), Jacques Tati for “Mon oncle” (1959) or François Truffaut for ” The American night” (1974).

He moved the whole world with his documentary “The March of the Emperor”. No wonder then that this film received an Oscar in 2006. Luc Jacquet is not the only Frenchman to have shone in this category. We also remember Commander Jean-Jacques Cousteau in 1957 with the documentary “The World of Silence”.

The Honorary Oscar is a separate award, different from the other Oscars. There are no nominees for this category, and the prize is awarded by a special committee. Several French artists have already been awarded this statuette and the latest to have obtained it remains Agnès Varda in 2017, in tribute to her entire career. This prize was also awarded to Jean-Claude Carrière (2014), Jean-Luc Godard (2010), Jean Renoir (1975), Henri Langlois (1974), Maurice Chevalier (1959) and Charles Boyer (1943).

These French who won an Oscar