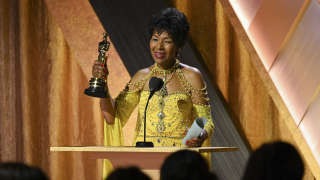 Director of “Rue Cases-Nègres” or “A white and dry season”, Euzhan Palcy received an honorary Oscar on Saturday November 19 for her entire career.

CINEMA – The ultimate award for any filmmaker. On Saturday November 19, Martinican director Euzhan Palcy received a Oscar of honor to reward his entire career. She thus became the second Frenchwoman to receive such a distinction, after Agnes Varda in 2017.

Better known in the United States than in France, Euzhan Palcy is a true pioneer in the representation of black communities on screen. She owes part of her success to her film Rue Cases-Nègreswho took the Caesar of the first film in 1984.

Decidedly accustomed to first times, the filmmaker was also the first black woman produced by a Hollywood major and author of an Oscar-nominated film thanks to her adaptation of André Brink’s bestseller, A white and dry season.

Euzhan Palcy has also distinguished herself by directing several socially engaged documentaries. We will cite for example Aimé Césaire, a voice for history (1994), in which she paid homage to the writer of the negritude » or Dissident journey (2005), a tribute to the Antilleans of the Resistance during the Second World War.

Often categorized as a filmmaker who only tells ” black stories to quote her, Euzhan Palcy has always refused labels and advocated a humanist credo. “My stories are neither white nor black, they are universal, colorful”she said when receiving her award.

During the Oscar ceremony, Canadian actor Michael J. Foxknown for his legendary role as Marty McFly in the series Back to the future, was also singled out. He received an honorary Oscar for his action in favor of the fight against Parkinson’s disease, a neurodegenerative condition from which he has suffered for thirty years.

“You make me tremble, stop it! » joked the actor receiving a standing ovationbefore qualifying this reward “ of a totally unexpected honour”.

Michael J. Fox, who rose to fame in the 1980s with the NBC sitcom “ Holy Family » (Family Ties) went public with his illness in 1998, when the hit television series “ Spin City ». He went into partial retirement a few years later, devoting himself to his foundation to finance research against Parkinson’s disease, and raising more than a billion dollars.