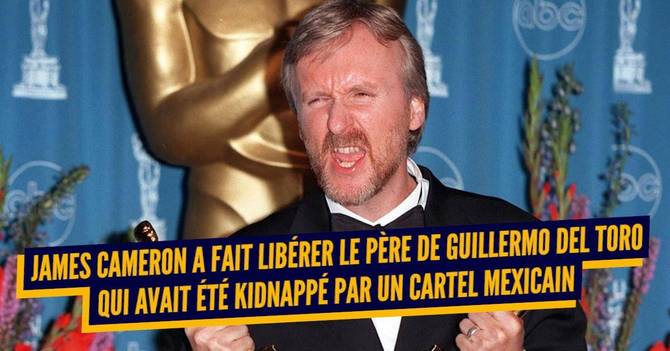 We sometimes realize after the release of a film that there have been plenty of filming secrets and that production has not been a long calm river. Some directors were forced to use trickery to finish their film or make the producers understand that they had to be left alone. We invite you to see some of the most badass directors in history with rather surprising anecdotes that sometimes even go beyond the cinema.

While they had already been friends for some time after meeting at a party, Guillermo Del Toro had proof that Cameron was a true friend. The father of the Mexican director was indeed captured by a cartel who demanded a ransom of one million dollars, but Del Toro had no more money since he had put all of them in his film Mimicking. Cameron then arrived and offered to pay the ransom and above all to hire a good old negotiator by paying the costs, which resulted in the release of Del Toro’s father. And you, how many of your friends have already paid the ransom for the kidnapping of your father to a Mexican cartel? Yeah, that can be counted on the fingers of one hand.

Passing through the United States in 1997, Miyazaki was to meet Harvey Weinstein who was to take care of distributing his film Princess Mononoke on the territory. Except that Weinstein was famous for cutting scenes in all directions without leaving the choice to the directors, and after their meeting he had let Miyazaki understand that he had to remove scenes from his film. The director didn’t let himself be taken aback and had a katana (Japanese sword) sent by post to the director with a single little message: “no cuts”, which means no cuts, either with the blade or with the film. Clearly badass in message, and very passive-aggressive.

At the Oscar ceremony where he was crowned for titanic, James Cameron ran into Harvey Weinstein who started telling him that he was really really cool with artists and that he could produce his next film. Except that Cameron was friends with Del Toro if you remember correctly, and that Weinstein had manhandled his director pal with his final cut a few years before. So Cameron told Weinstein he thought he was bad for the artists and they nearly came to blows before being separated by security. A few years later, Cameron said he regretted not hitting him with his Oscar when he had the chance, but violence doesn’t solve anything James.

Filmed during the Second World War and especially during the occupation, this film by Marcel Carné had a shoot strewn with twists and turns, including a heavy budget overrun. But where Carné was rather brave was when he hired Jewish laborers and craftsmen to work on his film, which was completely illegal and clandestine during a shitty time in our history. We even had to quote these workers in the credits under cover of pseudonyms to protect them and that contributed to the aura that this film still has today.

While he was to make the Lord of the Rings trilogy, Peter Jackson was threatened with being replaced by Quentin Tarantino by Harvey Weinstein because of his refusal to make a two-hour film instead of a trilogy. Peter Jackson was also denied the right to pass the casting to certain actresses like Ashley Judd or Mira Sorvino (both victims of sexual harassment by Weinstein, let’s remember). Luckily, the director of the saga is a man with a pronounced taste for revenge, which is why he used the face of Harvey Weinstein to create one of the orcs in the films and that we can say that he looks pretty much like the filthy asshole of his model.

Robert Rodriguez who tested drugs to make his first film

Robert Rodriguez believed in him but went a long way to make his film: he had no money, no technical team or equipment. He took part in a program to test drugs in order to raise $7,000, the total budget of the film, and as much to tell you that testing drugs like that is not always a good idea.

He shot the film in a hurry, asking the actors to also act as a technical team, recording the dialogues after the shooting of the scenes and keeping the failed scenes in the final cut, for lack of film. His goal was not even to get the film to the cinema but to succeed in reaching the video rental market, except that Columbia spotted his work and offered him to produce the second one. One again broke director who carded.

Before directing this film, Cimino was one of the hottest directors in Hollywood as he had just won the Oscars with Journey to the End of Hell. But barely two years after the release of his masterpiece his career was buried. The filming of La porte du Paradis was a real ordeal, Cimino showing too much perfectionism: he had a meadow repainted that he did not find green enough and increased the gap between buildings in an avenue because the space did not suit him.

Huge budget overruns, long shoots and multiple tangles with the studio, this is where Cimino did a good badass thing: he ended up placing a guard with a gun in front of his editing room to keep the studio representatives away. (which by the way sank because of the film’s failure). As a result, the film did not work at all, which happens when you want to present a 5:30 film that you reduce to 3:40 and the reviews are extremely negative. But Cimino “succeeded” in making more or less the movie he wanted by standing up to the studio.

Do you also find that copper coins taste better than steel ones?

The spot the most melted in France

Discover the RichesMonts Hot Spots, from December 13 to 18

10 of the best films of the awesome Tim Burton

10 directors who went way too far

10 movies that cost directors their careers

The articles most read

The ones you shouldn’t miss

Top 7 of the most badass directors in cinema, those who are not shy