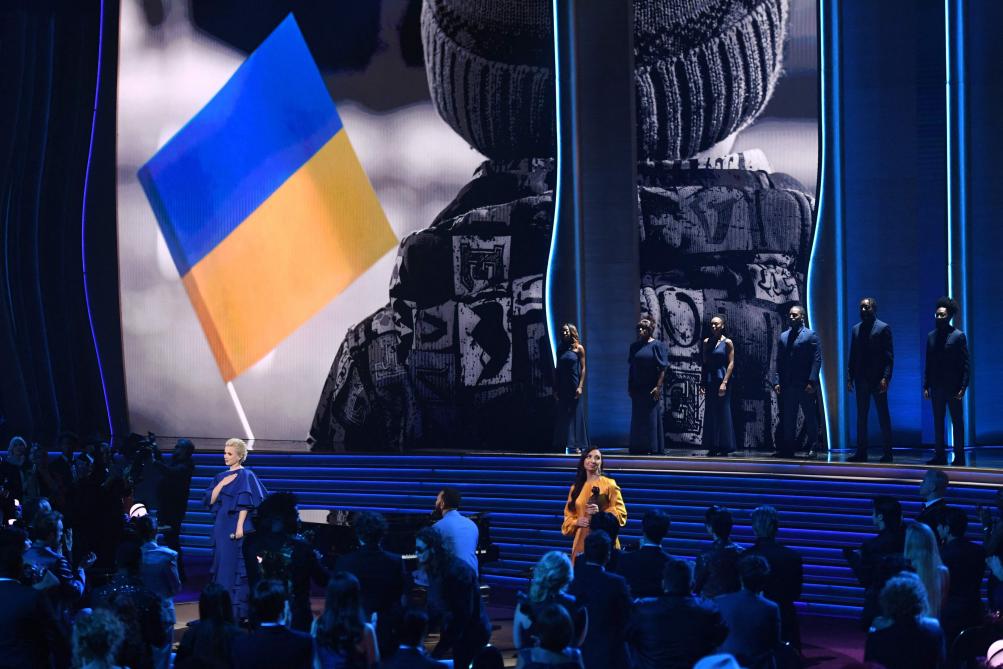 Ukrainian President Volodymyr Zelensky intervened Sunday via a speech recorded during the 64th edition of the Grammy Awards, equivalent of the Oscars for American music, to ask for support for his country, in the grip of an invasion by Russia.

The war in Ukraine, the slap in the face of Will Smith at the Oscars, the triumph of virtuoso musician Jon Batiste, the tribute to the disappeared and the failure of Barack Obama dominated the 64th edition of the Grammy Awards in Las Vegas on Sunday, the great celebration of the American music industry.

“A deathly silence. Fill this silence with your music”: Ukrainian President Volodymyr Zelensky once again marked hearts and minds by speaking at the Grammy Awards, via a recorded video address. In a moving appeal, he urged the American music industry to support his country, which has been invaded by Russia.

“Tell the truth about the war, on your social media, on TV. Support us in any way you can, all but silence. And then comes peace. launched President Zelensky in his usual khaki t-shirt, before a performance by John Legend, joined on stage by Ukrainian artists, Mika Newton and Lyuba Yakimchukt. And two huge flags were erected on the stage of the MGM Grand Garden Arena in Las Vegas.

History rarely repeats itself. But the slap in the face on March 27 at the Oscars in Hollywood by superstar Will Smith to comedian Chris Rock was on everyone’s mind when the Grammys began. The presenter, the South African comedian Trevor Noah, could not resist: “We’re going to listen to music, dance, sing, keep people’s names out of our mouths…” he launched in a transparent allusion to the now memorable “Keep my wife’s name out of your fucking mouth!” » yelled by Smith at Rock after he slapped him on stage for a bad joke about his wife’s hair.

Similarly, hip-hop musician Ahmir Questlove Thompson brought the laughs to his side before announcing the Song of the Year winner: “I am about to present this award and I trust you to stay 500 feet (150 meters) from me”. It’s this same Questlove, Oscar winner last Sunday for his documentary “Summer of Soul” who had received his award right after Smith slapped Rock.

The music, “it’s more than entertainment for me, it’s a spiritual practice”, launched the jack-of-all-trades musician Jon Batiste with a smile when he received his fifth most prestigious Grammy Award, that of the album of the year.

Virtuoso pianist but also multi-instrumentalist, conductor, anti-racist activist, Oscar-winning composer, this gifted jazzman energized the MGM Grand Garden Arena by declaring that “the creative arts are subjective and (that) they touch people at a time in their lives when they need it the most”.

Tribute to the deceased

A bit of comfort for the American rock band Foo Fighters who suddenly lost their drummer Taylor Hawkins at the age of 50 at the end of March: three Grammy Awards and a very beautiful performance on stage of “Happier Than Ever” by pop star Billie Eilish wearing a long t-shirt featuring the late musician. Taylor Hawkins, who died in a hotel in Bogota and whose toxicological analysis of his body revealed the presence of THC (cannabis), antidepressants and opiates, was also entitled to the tribute of his profession in the long last year’s list of missing people in the music industry.

No third Grammy for Obama

Former President Barack Obama will not be able, according to the United States Constitution, to serve a third term. And it also failed to land a third Grammy for best spoken word album and audiobook. Already rewarded in 2006 and 2008, he competed for the audio version of his memoirs, “A Promised Land” but was beaten by actor Don Cheadle (War Machine in the “Avengers” saga), author of “Carry On: Reflections for a New Generation from John Lewis”.

Ukraine, the slap in the face of Will Smith at the Oscars, jazzman Jon Batiste, Obama… The highlights of the 64th Grammy Awards