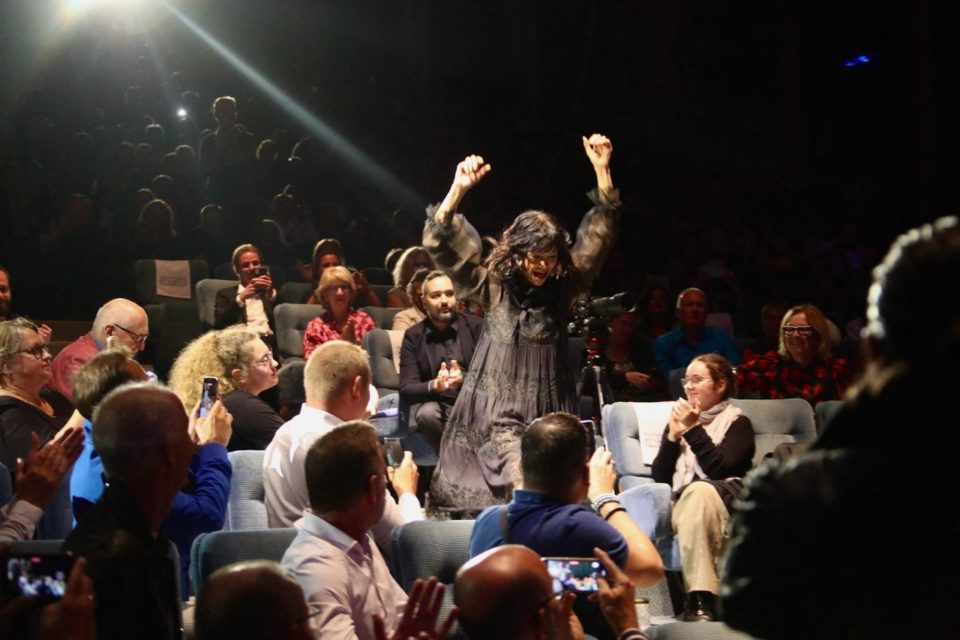 The Pays d’Auge
See my news

We will not soon forget his race down the steps of the large CID auditorium. Nor will we forget the cry of joy she gave when she arrived on the stage, nor her words that touched hearts.

“A free woman”. This is how Julie Gayet described Thandiwe Newton before giving him his Deauville Talent Award. A free soul “with the exceptional career of a woman of character” and a committed woman, whose availability and generosity on the boards, and her speech full of humanity at the CID were able to seduce and move the festival-goers.

“As an actress, you can play anything with agility and transformism worthy of great actresses”, launches Julie Gayet. The actress landed her first film role in 1991 in the feature film Flirting of John Duigan, alongside Nicole Kidman. The one who received an Emmy Award for her performance in the series Westworld in 2018 also stood out for his role in mission impossible 2that shot under the direction of prestigious filmmakers like Xavier Dolan (My life with John F. Donovan), Bernardo Bertolucci (shandurai), James Ivory (Jefferson in Paris) or Paul Haggis in Collision who won the Grand Prix at Deauville in 2005. A film that earned her the BAFTA for Best Supporting Actress the following year.

“You shine as much in blockbusters as in auteur films, in series or in the theater, you have no brakes, no limits, you are free”, continues the French actress who wonders: “Who knows if your dual culture, Zimbabwean and British, of those that enrich human experiences, has something to do with it”. A double culture and a pride that can be found in his first name, which has regained its initial spelling. A first name meaning ” beloved in the Shona language. “By thus breaking all the borders, I admire you”, admits Julie Gayet.

“You are one of those who have the courage to affirm your fightyou are a free woman “. Recounting the main lines of the career of the British actress, Julie Gayet underlined the “attention” she pays to others, insisting on her “choice to accompany the talents and stories that will change our view of the world. as a producer. She mentions in particular the animated documentary Liyana on young children in Swaziland.

Because Thandiwe Newton is not just an actress on the big and small screen and on the boards. She is also a woman committed to defense of women’s rights and against racist abuse. “One day I received two letters in my locker, says the British actress, referring to these years of studying anthropology. One came from a department head who encouraged me in my work and congratulated me. The other was scribbled in pencil and said: you were certainly very lucky, but don’t forget that you will always be a nigger. Which of these two letters struck me the most in your opinion? Yes, the last one, and that’s where a choice had to be made. I had to change my perspective”.

Deeply marked by humanity and the ties that unite us, animated by great wisdom, Thandiwe Newton delivered a speech of almost eight minutes in front of an auditorium touched to the heart by her words, before the screening of God’s Country of Julian Higginsher “masterpiece as an actress”, as she proudly admits.

“In this film, my character Sandra says that sometimes it feels like things never change. But I promise you that they change, ”she smiles, launching a whole reflection on the change. “In one day I change so many times that I wonder if I really exist, constantly repositioning myself, taking up the challenge of each moment”. Hosted by the love of othersshe compares humans to “diamonds so compressed they spring into a stupefying existence”:

These diamonds are us. And this way we tap into sharp and powerful tools within us is what defines us. We’re all diamonds in the rough, all ordinary humans, pretty bags of dust

The one who says she feels “deeply each person” she meets, did not hide her deep love of humanity and harmony:

I will change my accent to connect with you so that we feel alike, safe together. Every living being wants to get better and rise towards the light. I try to be that light and by doing that I will change not because of you, but for you

And concluded with an ubuntu proverb, an African philosophy encompassing notions of brotherhood and interdependence between human beings. “I am because you are,” she smiles, her voice full of emotion. This garden of humanity in which we all live, mere dust trying to rise”.

Was this article helpful to you? Note that you can follow Le Pays d’Auge in the My News space. In one click, after registration, you will find all the news of your favorite cities and brands.