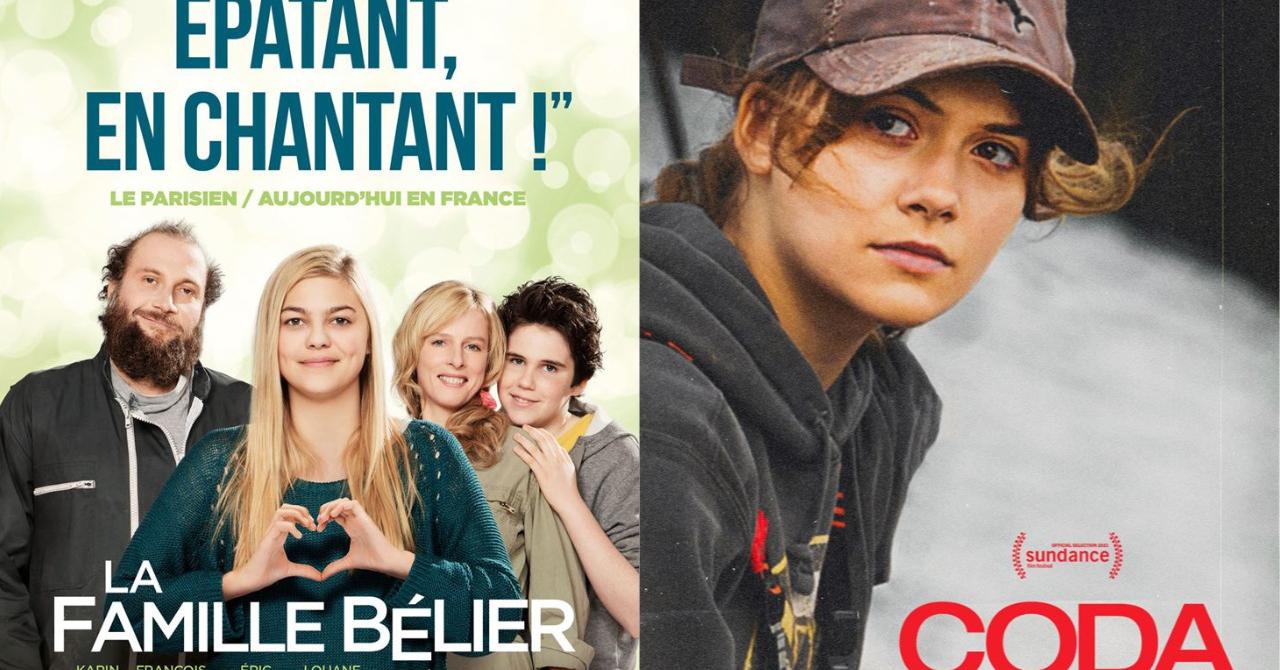 The Apple TV + feature is neck and neck with The Power of the Dog for the Best Picture Oscar.

The big winner of Sundance 2021 is him! Last January, the American remake of The Aries Family won prizes and enthusiastic reviews. A few days later, he was nominated in three categories at the Oscars : Best Film, Best Adapted Screenplay and Best Actor in a Supporting Role. And since, the screenwriter/director Sian Heder and the hearing impaired actor Troy Kotsur have been honored at the Screen Actors Guild Awards, BAFTA and Critics Choice Awards. A look back at its genesis with its various protagonists, in front of and behind the camera. Waiting to receive statuettes this Sunday?
By Thierry Cheze

Grand Jury Prize and Audience Prize, Coda hit the mark at Sundance 2021. The name given to hearing children of deaf parents is therefore now also the title of the remake of The Aries Family, definitely born under good stars. ” Never in 2015, reading this script, I would not have imagined this destiny, confides the happy co-producer of the two versions, Philippe Rousselet. “Obviously I believed it. It’s not everyday that we end up with a story in our hands so unique. But in the cinema, there is always a luck factor, of which The Aries Family like Coda have benefited. »

The Aries Family holds a special place in the career of Philippe Rousselet. It marks his meeting with Éric Jehelmann with whom he joins in his structure Jerico Films (The Promise of Dawn, Little Country…). And it was precisely Jehelmann who had begun to develop the story of this only hearing girl from a family of deaf people whose destiny changes when she discovers a gift for singing. An original idea by Victoria Bedos which gave birth to a screenplay co-written with Stanislas Carré de Malberg, Thomas Bidegain then Éric Lartigau who directed it. The rest, we know it: more than 7 million entries, I fly by Michel Sardou brought up to date, Louane celebrated by the César for best revelation… But what we know less is that the film was also a great success internationally – more than 3 million entries – and quite a few remake offers, to which Rousselet vetoes. “Because very early on, I only had one priority, an American remake, and I was careful that nothing could endanger him. » This American tropism has nothing to do with a fad. In 2008, Rousselet created Vendôme Pictures in the United States and produced Lord of War and Source Codedwith Lionsgate, which he will therefore spontaneously see for the remake rights of The Aries Family. The deal is done quickly and allows Philippe Rousselet to become the co-producer via Vendôme Pictures.

Coda: the successful remake of The Bélier Family [critique]

Then begins the search for a screenwriter capable of appropriating this story. A dozen candidates jostle at the gate, including Sian Heder, whose first feature, Talulah, had caught the eye of Lionsgate at Sundance. The latter contact her and explain to her the challenge that she takes up with enthusiasm. “Obviously I started by looking The Aries Family. But I never saw him again. I am thrown into trying to take the story elsewhere. » Starting with the location of the action, in Massachusetts, where she grew up. “In the United States, the structure of our farms is different from the French ones. This family had to evolve in another universe. Gold, in my childhood, I often went to Gloucester and I was fascinated by the fishing community, resisting large structures to maintain their independence. »

Coda will therefore be located in this environment. But that’s not the only change it brings. “It was impossible for me to write this film without this family from being interpreted by the deaf. Here is why, more than the story of the emancipation of a teenager thanks to singing, Coda is first the portrait of a family and deals much more with disability. By moving the backbone of the narrative, I appropriated it. » Rousselet and his friend Patrick Wachsberger (deminers), then co-president of Lionsgate, are conquered. “Sian presented the best project. We then decided to also entrust him with the realization of Coda. She had the movie in mind. And this film made us very desire. » But soon after, Wachsberger is dropped from Lionsgate. And his successor decides to make a clean sweep of the past and not to renew the adaptation rights of The Family RAM… while retaining those of the scenario of Coda. A situation that could have become inextricable without the gifts of negotiators from the Wachsberger-Rousselet duo, who took control of the project and found a new partner with Pathé. Sian Heder can therefore build his “film with complete peace of mind. Even though the structure
of the screenplay (40% of the dialogues in sign language) obliges him to modify his working method. “I usually do readings with friends to hear the rendering of the dialogues. There, I called on two women who nurtured my culture of the Deaf community and acted as interpreters for me. It was the first time that, to correct them, I was not going to hear my dialogues but to see them. » From the outset, she had only one actress in mind to portray the mother of this tribe: Marlee Matlin, the Oscar-winning actress from Children of silence. “I had never seen her embody a working class woman. I wanted to give her this compositional role. » When she receives the proposal, Marlee Matlin does not fall from the clouds. ” It was we were talking about this scenario in the deaf community. But I needed to know Sian’s vision. We talked for three hours and in view of his already in-depth knowledge of our community, I understood that we had the same film in head. » She also slips him the name of the one she would like to see embody her husband: Troy Kotsur, pillar of the company Deaf West, based in LA, with whom she dreams of working. Admirer of this theater group which mixes deaf and non-deaf actors, Sian Heder validates this choice without hesitation.

On the other hand, she struggles to find the one who will play the couple’s daughter. “The casting process was very long because we were looking for THE rare pearl: a 17-year-old actress with an incredible voice and an ability to carry a film on his shoulders. » Sian Heder has already seen more than a hundred candidates parade when the video of Emilia Jones, a Welshwoman who, after starting out as a child in Pirates of Caribbean: The Fountain of Youth, has just made itself known by the Netflix series, Locke and Key. ” His voice was incredibly pure. And I was immediately struck by his naturalness which was going to allow him to be also at comfortable in singing lessons than on a fishing boat. I had found my heroine. » Seduced by the scenario, Emilia Jones is just as seduced by the sum of the challenges to be met. “In my career, I had the chance to come across Pascal Laugier with Ghostland. He pushed me to do things he knew I was capable of and I couldn’t. It carried me through this whole process” where, for eight months, she took high-dose sign language and singing lessons. All this for a logic of interpretation a thousand leagues from his habits. “In cinema, I always think that the less you do, the better. Corn with sign language, it’s the opposite. She you encourages you to express things emphatically with your face. Discretion is not required! » movie with serenity. Even if the structure of the screenplay (40% of the dialogues in sign language) obliges him to modify his working method. “I have for habit of reading with friends to hear the rendering of dialogues. There I called on two women who nurtured my culture of the deaf community and have served as interpreters. It was the first times that, to correct them, I was not going to hear my dialogues but see them. » From the outset, are especially the filming locations – scouted with the help of Kenneth Lonergan who shot Manchester by the Sea in the region – who inspired her to the point of becoming characters in their own right. Philippe Rousselet had also immediately perceived their importance in the production of Coda. “Many producers would have it obliged to turn to Canada for questions tax credits. But, with Patrick, we favored his view of the film. We had hired an author and we preferred increase costs – a $15 million budget – rather than clipping its wings. »

Eric Lartigau: “With La Famille Bélier, I knew I had made a good film”

That ” richness “ is also found in the choice of songs, another essential element of the film. ” Coda not being The Aries Family, we all agreed so as not to look for the equivalent of a Sardou”, explains Rousselet. With Marius de Vries (Soundtrack of La La Land and D’Annette)Sian Heder opts for songs whose lyrics echo the plot, from You’re all I need of the duo Marvin Gaye-Tammi Terrell at Both Sides now by Joni Mitchell. “Joni wrote this song in his twenties, explains the director. She always said that this title marked the end of his childhood. It is also what happens with the character that Emilia plays”, who performed all the songs live on set. Arrived at the assembly, Sian Heder knows that she plays big in terms of balance. “When you find yourself with a material as moving, care must be taken not to not manipulate the viewer. With my editor, we therefore left a lot of room for humor and made sure that the emotion was never born solely from the music. » The first cut seduces the French producer. “We had the final cut. But everything remained very “European”, based on exchanges. By choosing Sian, we had a very clear vision of the film that she was going to make. The result is totally correct. » A bias rewarded since from its screening at the opening of Sundance, the bids rose high to acquire the film. With Apple TV+ as the winner, which will accompany its streaming release with theatrical release in the United States. With an Oscar campaign in mind? Philippe Rousselet recognizes this: ” To arrive with a feel good movie talking about disability with such lightness at the end of the Covid is necessarily the perfect timing. »

Where to see the films nominated for the 2022 Oscars?

From The Bélier Family to CODA, the film that could create a surprise at the Oscars