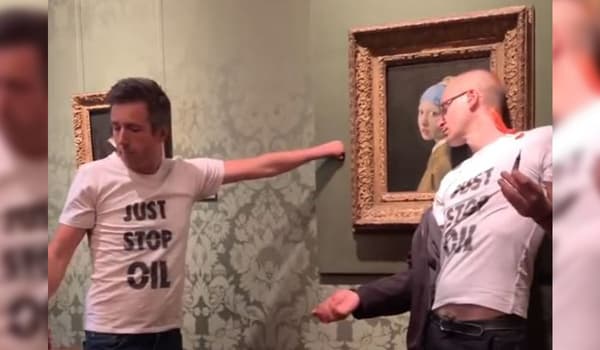 Through civil disobedience, this new British movement demands an end to oil and gas projects. After various actions, activists have chosen to attack art to shock and to demand that the planet be protected as much as the works.

After the Sunflowers of Van Gogh sprinkled with soup, the wax statue of Charles III covered in tart, it is the famous painting by Vermeer, The Girl with the Pearl Earring, who was targeted on Thursday. The punchy actions of the “Just Stop Oil” movement never cease to make a splash.

However, this British militant group is relatively young since it was only created in February 2022. Since then, in line with collectives such as Extinction Rebellion, it has multiplied civil disobedience actions and worked in particular in coalition with other movements from other countries.

In France, the local French organization supported by “Just Stop Oil” is Dernier Rénovation, behind the interruption this year of two stages of the Tour du France and the irruption of an activist on the central court of Roland Garros.

A method deemed necessary by the group because “we must do much more to stop the greatest crime against humanity”, can we read on the site.

“Just Stop Oil” is carrying out actions with the objective that the British government commits to stopping new licenses and authorizations for the development and production of fossil fuels.

“Allowing the extraction of new oil and gas resources in the UK is an obscene and genocidal policy that will kill our children and condemn humanity to oblivion. This must stop,” says the movement.

“The choice: a rapid transition to a low-energy, low-carbon world, or social collapse,” he continues.

Shortly after its creation, “Just Stop Oil” multiplied the actions. In March, activists disrupted the 75th British Academy Film Awards (BAFTA) as well as several football matches across England. March 21th, one member even tied himself to a goal post with a cable during a match between Everton and Newcastle.

‘Just Stop Oil’ is also behind the disruption of the Formula 1 Grand Prix at Silverstone. Five activists were then seated on the track, in the middle of the race. They had, on occasion, received support from several pilots.

“(With these actions), we were still only on page 8 or 9 of the national press”, deplore the movement.

It is with this observation that “Just Stop Oil” has chosen to target famous works of art. “We had to change things and take the media by surprise,” the group continues on its website.

“Attacking art is an act of enormous cultural transgression. It breaks a taboo. Art is sacred in our culture – attacking it is almost blasphemy.”

“Tackling what people really care about makes them ask the hard questions (…), to ask themselves if we have the right priorities”, explain the activists.

“Just Stop Oil” indeed wants to convey a main message: “What is worth more, art or life?”. As the collective explains, these actions are planned “knowing that (the paintings) were properly protected”. For activists, the planet must be equally protected.

“Yes, art is precious. We deeply share this love. What we want to do is save a future where human creativity is still possible.”

Thus, this summer, two activists glued themselves to the painting of John Constable The Hay Wain at the National Gallery in London. They covered the painting with a printed illustration that reinvented The Hay Wain as an “apocalyptic vision of the future” that depicted “climate collapse and what it will do to this landscape”.

Then these are the Sunflowers of Vincent Van Gogh, the wax statue of King Charles III and The Girl with a Pearl Earring of Johannes Vermeer who were targeted.

“Just Stop Oil”: who are these environmental activists attacking works of art?