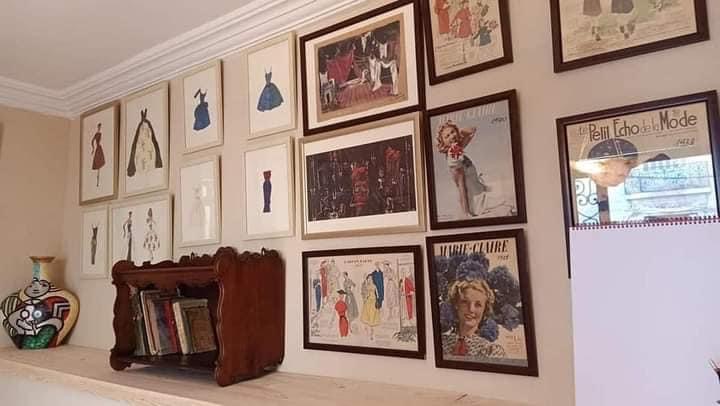 ALGIERS: The first residence of the great French couturier, Yves Mathieu-Saint-Laurent, known as Yves Saint Laurent, born on August 1, 1936 in Oran in Algeria at the time of French colonization, will soon open its doors to visitors.

An Algerian entrepreneur by the name of Mohammed Affane has bought the family home in which the great French couturier, one of the most famous in the fashion world, grew up in order to restore it.

After several months of work, Yves Saint Laurent’s house in Oran is now like new.

The building will be transformed into a private museum which will tell the story of the first steps of the famous fashion designer, whose works have inspired many colleagues around the world.

The history of this house dates back to the beginning of the 20th century, during the French occupation of Algeria. It was in this two-storey home that the couturier lived during his childhood and adolescence and produced his first fashion creations.

It is also in this same place that the couturier sketched his first sketches, which won the prize for the best design of the 1950s. This allowed him, at the time, to join the studio of international designer Christian Dior.

The house is located at number 11 rue Stora on the Saint Michel plateau. The ground floor was inhabited by Yves Saint Laurent’s parents, while his cousins ​​occupied the first floor.

According to the stories that the author told of his childhood, it was in this house that he discovered the refinement of Oran society life, alongside his mother’s friends who came to have tea and discuss the latest fashions.

Regarding the importance of the house in Laurent’s career, French researcher Aurélie Samuel says: “Yves-Saint Laurent lived his childhood until the age of 18 in this house before moving to Paris to work for the Dior workshop.”

Samuel also explained to the Algerian press that the artist started “in his room in Oran, making little paper dolls. He dreamed of establishing a fashion house there. He had an amazing artistic sense, even though he was only 18, he read the famous Vigo magazine that his mother used to read. »

After having belonged to an Algerian family for several decades, Affane decided to buy the house and restore it, in order to restore the residence to the appearance it had during the years when it was inhabited by the Mathieu-Saint-Laurents. .

The house has been open to visitors since June 26.

The Algerian architect Youcef Fernane, who supervised the restoration project for Yves Saint Laurent’s house, aimed to recreate “down to the smallest detail the childhood of the couturier recognized throughout the world”.

And to add “it is a very important historical house, and it is our duty today to preserve these treasures linked to Algerian history. »

Fernane confirmed that he worked with a team of engineers for a year to restore the house and restore its spirit, through an extensive historical research process with the aim of returning to the time in which the creator lived.

The design team worked on old photos and archives to recreate the same atmosphere of yesteryear, even in terms of accessories and furniture, to make the house a “house of memory” that perpetuates the history of Laurent and his distinguished works. He drew in this house more than 30,000 sketches which will soon be exhibited there.

Regarding the restoration work, Fernan explained: “The re-design process was not easy, our goal from the beginning was to create an atmosphere dating from this period, and samples of his sketch works will be displayed in the home”.

Born on August 1, 1936 at the Jarsaillon clinic in Oran, Algeria, Yves Saint Laurent spent the first eighteen years of his life there. He was described by those close to him as a sensitive student, a lover of literary works, drawing and fashion magazines.

The rather shy young boy, who grew up in good Oran society, showed drawing skills very early on.

His parents were members of the Oran upper class. His father Charles was the head of an insurance company and director of a cinema chain. Yves Saint Laurent flourished in this society with his two younger sisters, Michèle and Brigitte, born in 1942 and 1945.

The beginnings of his existence in Algeria marked the style of the creator in his artistic career, and this, throughout his life. A supporter of diversity, he was the first to hire models of Asian or African origin during his fashion shows.

The late international designer described his hometown as follows: “Our world at the time was Oran and not Paris. Neither Algiers, the metaphysical city of Camus with white truths, nor Marrakech and its beneficent pink magic. Oran, a cosmopolis of traders from all over, and especially from elsewhere, a city sparkling in a patchwork of a thousand colors under the calm sun of North Africa. »