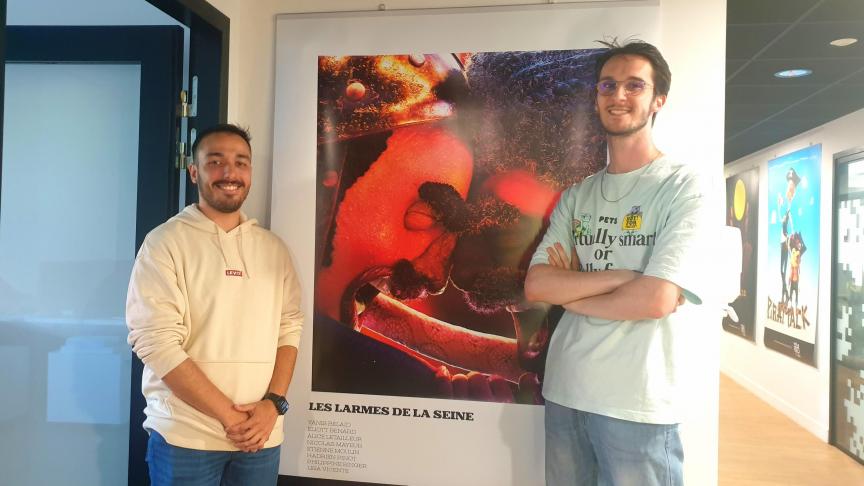 
” It’s weird to have our film, our baby, selected for a competition of this magnitude
», says Eliot who co-directed Tears of the Seine with Yanis. Both did not expect to go to the BAFTA student awards, among the three short films finalists. ” We jumped out of bed when we found out. When they talk about their film, they talk about it like a child. They spent a large part of the two years of their master’s degree working on this project.

They are proud of their production, which has already won awards: SPARK festival prize in Canada, AFK in Rennes. They competed at the same time as the professionals with a film made as part of their studies. The BAFTA student awards are reserved for students. On July 16, they leave for Los Angeles to represent their short film.

A story during the Algerian war

” We didn’t expect to have so many prizes when we were still students. We were lucky to have all the school material available and especially the moral support of the teachers.
adds Yanis laughing. ” The film is particularly close to our hearts because it recounts the events of October 17, 1961, the day when the police threw hundreds of Algerian demonstrators into the Seine. It is a date little known to the general public. The events are told from the point of view of the demonstrators. We have tried to be unifying in our approach. The Algerian war is an episode of history that we unfortunately do not know enough and its memory is still conflicting.. »


“We believe in the story being told. »

How long did it take the students to make this short film? ” In our schedule, it was two-thirds film, one-third class. In the first year of the master’s, we worked eight hours a day. A lot more in second year but that didn’t bother us. We believed in what we were doing “says Eliot. ” We are convinced of the importance of the story that we tell and the technique comes to magnify all that. »

They were eight students to work on the film, each with their talents. ” Some are more gifted in certain specific techniques. We didn’t have any problems between us. It was mostly an emulation
says Yanis.

Lille: start of the Tour de France and passage through the Grand-Place, the videos

DIRECT. Tour de France 2022: a very nervous start to the stage between Lille and Arenberg

The Tour de France in Lille: images of an incredible popular festival

Continue reading on this topic(s):

It is always the same neighborhoods that are “densified”, never cities like Bondues, Marcq or Wasquehal. The MEL must stop concentrating everything …Read more