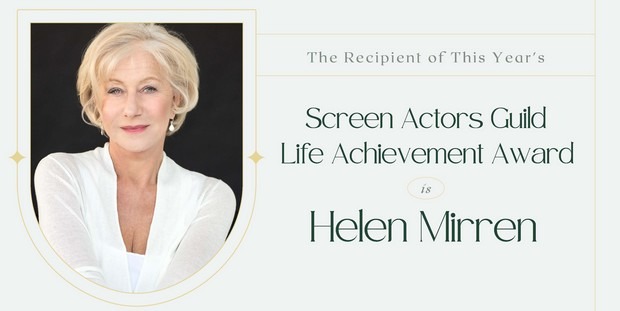 On the other side of the Atlantic, the health situation does not seem to worry anyone for the moment. It is therefore to be hoped that the cinema prize season will be able to take place there normally, after a start to the year 2021 which is to say the least complicated. In any case, the union of American actors, the influential Screen Actors Guild, has already begun preparations for its 28th ceremony of the Screen Actors Guild Awards. This should take place on Sunday, February 27, 2022 in Santa Monica. It is on this occasion that the English actress Helen Mirren will receive the honorary prize, according to the announcement made by the president of the union Fran Drescher last week, on November 18.

Since the Lifetime Achievement Award has been around for significantly longer than the competitive awards, which only started in 1995, Helen Mirren will be the 57th winner. After a year off due to the pandemic, she succeeds American actor Robert De Niro, who received it in January 2020 from the hands of Leonardo DiCaprio. Since the beginning of the century, Helen Mirren will be the tenth actress honored in this way, after among others Julie Andrews, Betty White, Rita Moreno and Lily Tomlin. As an actress of British origin, she belongs to a small minority, alongside her sisters Julie Andrews, Angela Lansbury and Elizabeth Taylor.

Helen Mirren’s (*1945) star as a movie star took a long time to manifest. Despite a very solid career on the boards and on television from the beginning of the 1970s, the actress had only held minor roles in films like A Midsummer Night’s dream by Peter Hall, Age of Consent by Michael Powell, The Savage Messiah by Ken Russell and The best of all possible worlds by Lindsay Anderson. However, from the 1980s, it began to impose itself, in particular thanks to the sulphurous caligula from Tinto Brass, to the epic Excalibur by John Boorman and cal by Pat O’Connor, which earned her her first prize for Best Actress at the Cannes Film Festival in 1984.

The roles then became more important and the names of the directors more prestigious. Witness his collaborations with Peter Hyams (2010 The Year of First Contact), Taylor Hackford – her husband since 1997 – (Night Sun), Peter Weir (Mosquito Coast), Peter Greenaway (The cook the thief his wife and her lover), Paul Schrader (strange seduction) and Gabriel Axel (The Prince of Jutland).

A second consecration at the Cannes Film Festival through The Madness of King George by Nicholas Hytner in 1995 allowed him to make a name for himself on the international cinema scene. This undeniable gain in popularity has, however, resulted in a choice of projects that are overwhelmingly commercial in nature. Thus, Helen Mirren has certainly been able to monetize her services for films such as Mrs. Tingle by Kevin Williamson Calendar Girls by Nigel Cole, fashion mom by Garry Marshall, Benjamin Gates and the Book of Secrets by Jon Turteltaub, Power games by Kevin MacDonald, Red by Robert Schwentke The Rachel Singer Affair by John Madden The Recipes of Happiness by Lasse Hallström, The woman on the board by Simon Curtis hidden beauty of David Frankel, his participation in the last three episodes of the universe Fast and Furious and Anna by Luc Besson.

More demanding films were certainly less numerous in recent years, although not completely absent from a heterogeneous filmography either. Since The Pledge by Sean Penn and Gosford Park by Robert Altman, passing through his leading role as Queen Elizabeth II in The Queen by Stephen Frears, until more recently The great Escape by Paolo Virzi and The Art of Lying by Bill Condon. At the beginning of next year, it will be on view in The Dukethe latest film from the late Roger Michell.

Somehow a privileged witness to the rise of the Screen Actors Guild awards, Helen Mirren is the honorary winner who has been most often rewarded by her peers so far. Between the year 2000 and 2016, she was nominated thirteen times and won it five times: for Gosford Park in 2002 (Best Supporting Actress and Best Ensemble), another double hit five years later thanks to The Queen and the mini-series “Elizabeth I”, then for the TV movie “Phil Spector” by David Mamet in 2014.

As for the Oscars, she has four nominations to her name for The Madness of King George, Gosford Park, The Queen and Tolstoi The Last Autumn. She won it in 2007 for The Queenwhich had also earned him countless other trophies including the Volpi Cup at the Venice Film Festival in 2006.

The Screen Actors Guild Award is not at all her first honorary award, since she has already received others from the British Film Academy in 2014 and the Berlin Festival, in the form of a Bear Gold of Honor in 2020.