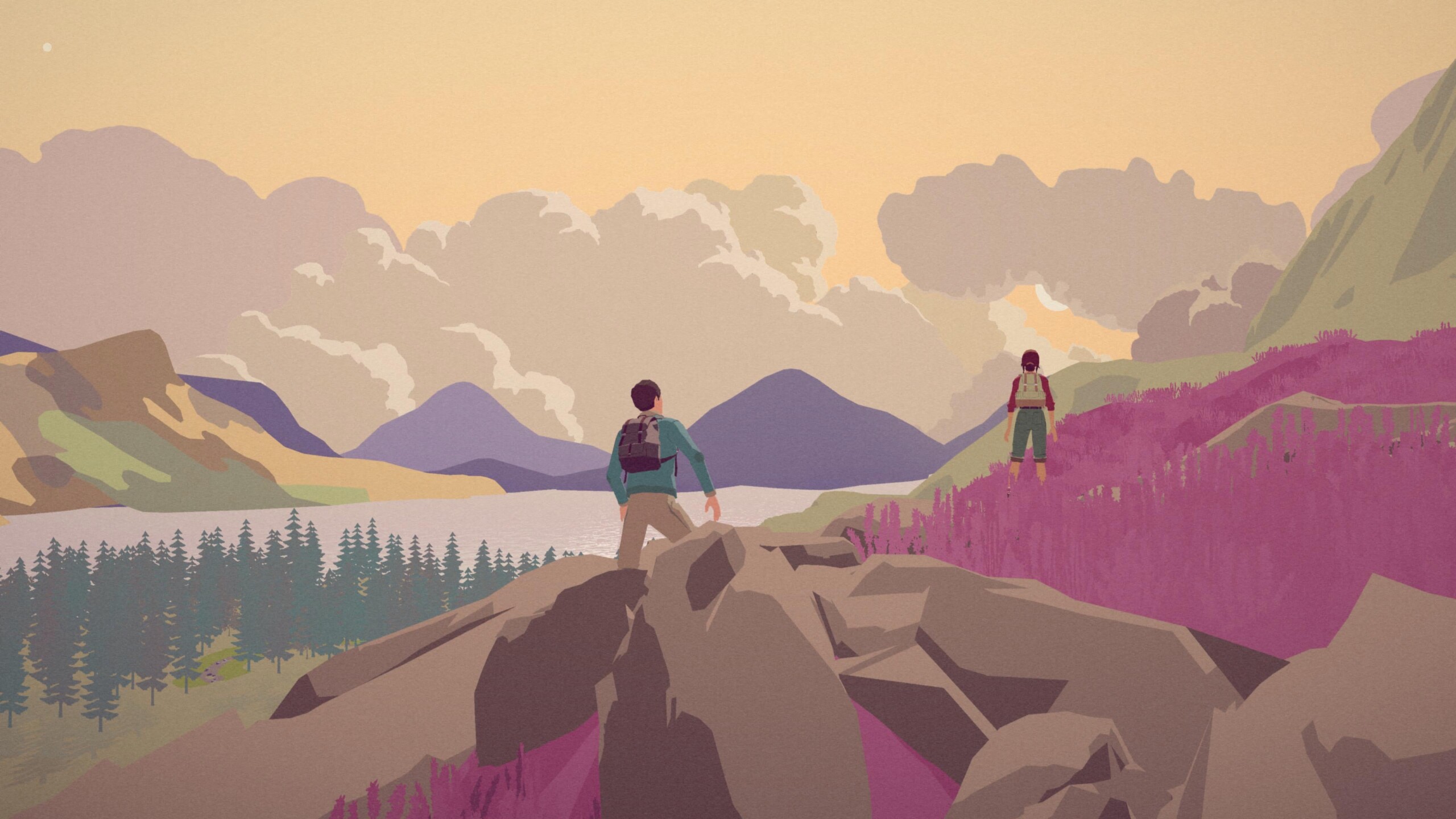 Games released on mobile platforms and then benefiting from a larger porting on PC or consoles are not legion, but South of the Circle is one of them. Originally released in October 2020 on iOS (via Apple Arcade), the game is set to be released on PC via Steam and GOG, PlayStation 4, PlayStation 5, Xbox One, Xbox Series X|S and Nintendo Switch on August 4th at the price average of €12.99.

Since then nominated for an Apple Design Award as well as the DICE Awards, South of the Circle is a narrative experience based on choices and their consequences developed by the British studio State of Play (already winner of a BAFTA for the game Lumino City) and co-published by 11Bit Studios. Let’s see what it’s worth.

Testing conditions: We completed the story offered by South of the Circle in approximately 3.5 hours of playtime on PlayStation 5 via a copy provided by the publisher. This test is offered to you without major narrative spoiler.

The duties of grown-ups

The originality of South of the Circle prevails in the fact that the story takes place on several temporalities. We are at the dawn of the Cold War, and Peter Hamilton, a British man in his thirties, a Cambridge university student, finds himself in a plane in the middle of the continent. Antarctica in the heart of the 60s. After the flight suffered some setbacks, the vehicle crashed.

You’re going to have to work your way through the blizzard on your own to find help and contact anyone who can get them out of this bind. Alone because your pilot, Floyd, got his leg stuck in the plane and is now injured. Alone and on your own, you will have to challenge yourself in a narrative adventure which will push our character to question himself through many flashbacks who remind him of the reasons for his coming here as well as everything that led him to who he is today.

From his childhood under the aegis of a difficult father, to his difficulties in being recognized by his university peers because of an end-of-training article that was delayed in being published, to the consequences of the Cold War or even to his meeting with the young Clara McKittickalso a young academic, and who will occupy a very important place in our history, South of the Circle won’t occupy you no more than 3h30 to 4h of playing time and promises you some variations (at least 2 slightly different endings depending on the findings) in its epilogue.

Choices and their consequences 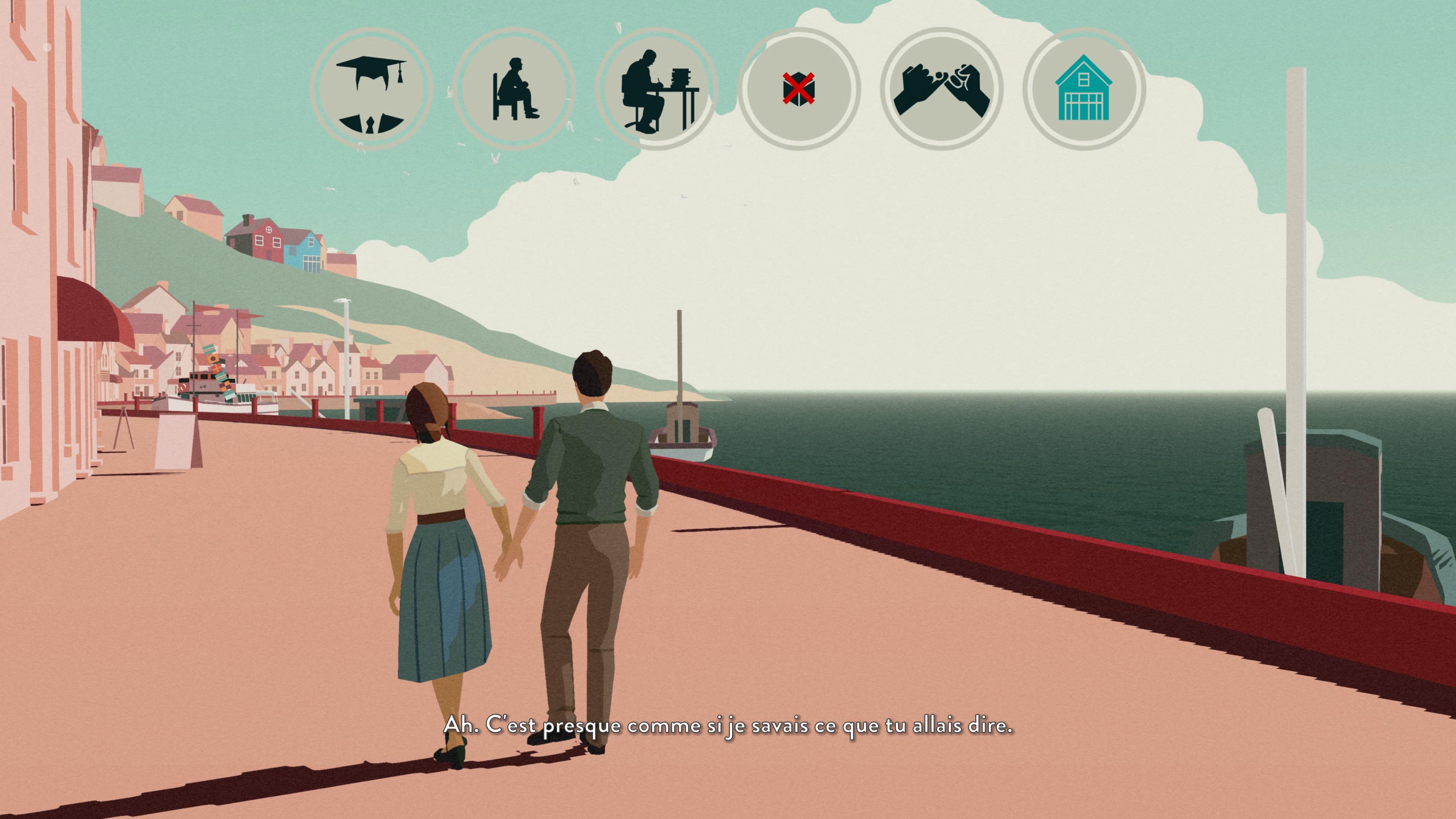 Indeed, throughout the story and each time you speak, you will have to make many decisions concerning, on the one hand, the spirit with which you wish to respond to your interlocutor, choosing (most of the time) from multiple response stylesand on the other hand during crucial moral choices which will be “stored” on the top of the screen until the final resolution which will thus vary according to these choices.

The catch is that your response types are represented by symbols (there are 5 in total), which can range from “shy, pessimistic, depressed” to “enthusiastic, interested, curious” going through “frank, fervent, affirmative”, the “panicked, perplexed, worried” and finally “caring, honest, open”, and not by these words precisely and that you will have to remember what each of the symbols that appear on the screen associated with their controller/keyboard button.

A decision that seems surprising as there would be room on the screen to induce the player in real time on what he intends to choose. Note all the same that you just have to take a break and go find the Help menu to find your way around but this will of course break the immersion, knowing that the answers must be given very quickly under penalty of a choice automatic which will not necessarily always suit you.

We realize, from these few non-adjustments, that South of the Circle actually comes from a mobile platform at first sight, requiring a more refined interface, to the detriment of this port which would have benefited from particular care on this point for make the whole thing more readable.

Most of the gameplay obviously lies in these perpetual choices in the form of QTEs, but it did not seem to us that this had any huge impact on the course of events. The moral choices described earlier act on the continuation and the epilogue of your adventure but are counted in one small dozen notable eventswhich will therefore vary part of the conclusion that we found a little hastily dispatched.

The rest of the gameplay of South of the Circle lies in rather heavy movements (logical given the amount of snow spread on the ground), driving vehicles or even searching shelves throughout the 3 acts that punctuate the game. 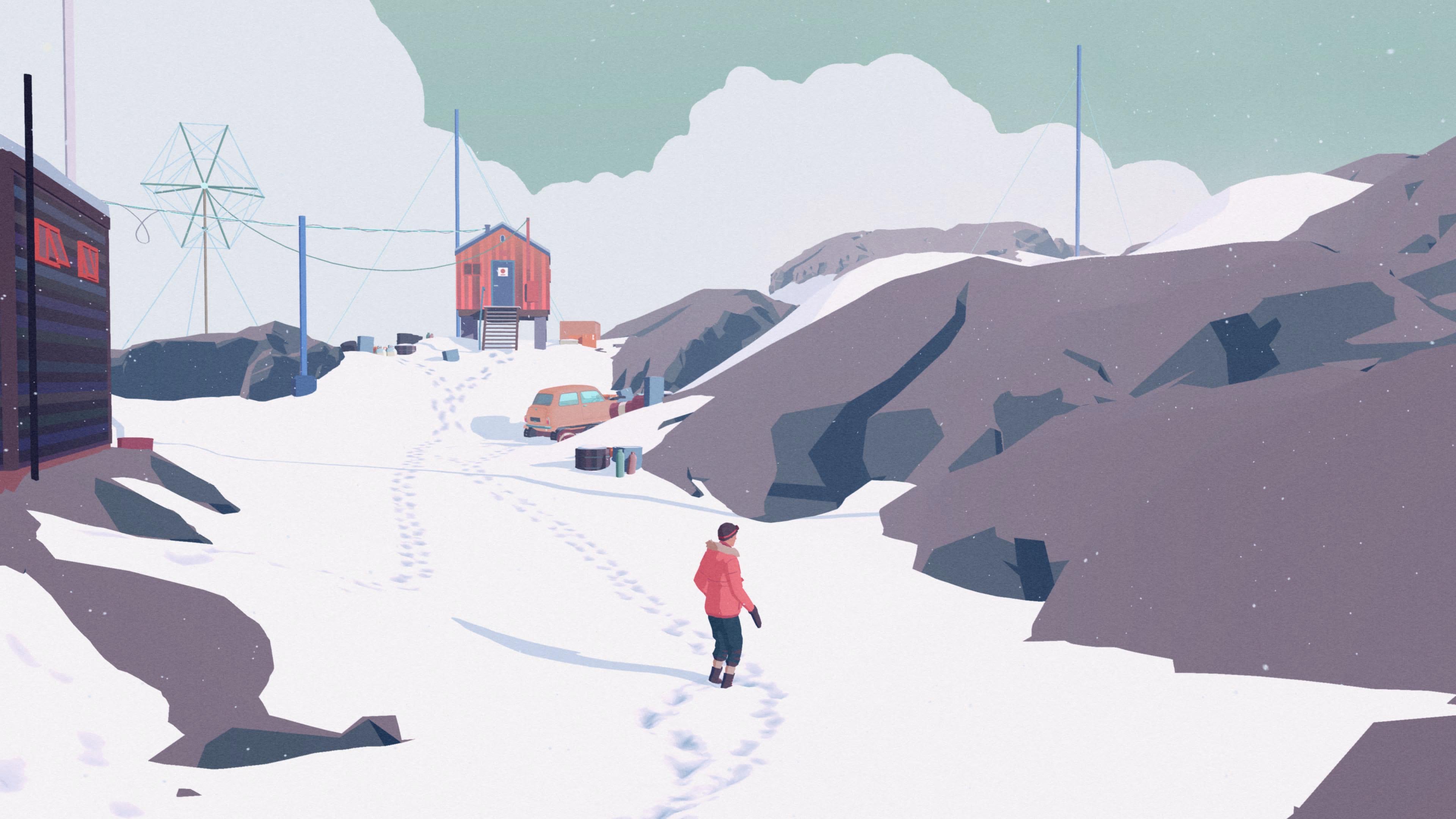 You can imagine that you won’t meet a lot of people in these frozen lands, which will unwittingly be the scene of dubious events that you will soon discover and the only human contact you will have will be with Floyd via scattered radios in the buildings visited. Between shenanigans and corruption, you epic in Antarctica supposed to help you collect data for your long-awaited article will turn into a way of the cross and will lead you to undisclosed places.

All in a remarkable narration and stagingwho does not hesitate to mix scenes and sets, with smart and thoughtful transitions, so much so that one wonders if our hero does not simply lose the ball because of the polar cold in which he evolves. Is everything we see the fruit of our imagination? And how are you in danger?

Special mention also to the actingparticularly effective, thanks to the presence of known faces and which give life to the characters which one would say painted by hand, like Gwilym Lee seen in Bohemian Rapsody, Olivia Vinall or even Michael Fox. One of the remarkable elements of South of the Circle also resides in the quality of its decorations can just as well represent frozen scenery, green meadows, cities but also living forests and other sunny mountains. Note that many artworks (nearly 100) can be found as bonuses in a special menu to appreciate the work of the artists.

Also what about the soundtrack, which perfectly underlines the events on the screen which sums up the era of South of the Circle. Without containing a recurring theme that we remember, the music used always sounds right and perfectly manage to convey the emotions intended by the developerswhat’s more when you have a game with clear-cut biases and which does not hesitate to approach strong and powerful themes such as ecology, equality between women and men, geopolitics and of course love in the background.

Still remain some translation bugs with too many symbols or unsuitable you/you, as well as (very) rare moments of clipping that in no way spoil an experience that doesn’t do too much but does it rather well. We also regret the lack of support for the DualSense controller that we would have been entitled to expect from a specific PlayStation 5 version (haptic feedback in particular).

South of the Circle could well be the breath of fresh air that we gladly welcome between two intense video game experiences. Through its narrative and staging choices, the adventure manages to convince people to let themselves be followed until the end of their approximately 4 hours of play for a small price, to see where these entanglements of scenes and decisions will take us. We also salute the performance of the actors who set the perfect tone for the dialogues, as well as the music, which is always fair and discreet. We can blame it for its gameplay that is a little too minimalist as well as a lack of real depth in the choices leading to the final resolution, but we finally let ourselves be pleasantly caught up in this story of promises and choices, in order to remind everyone of the importance of our words and deeds.