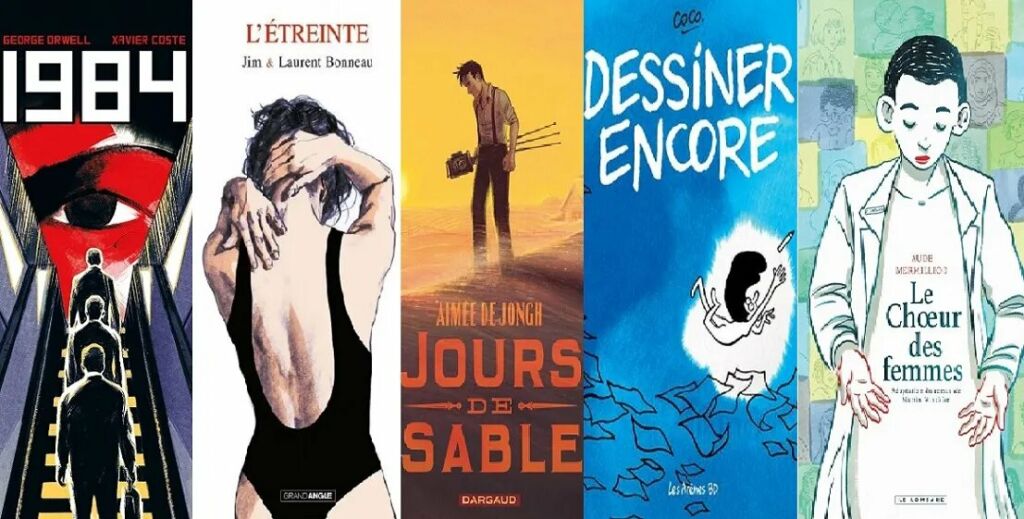 The fourth edition of the Fnac France Inter Comic Book Prize revealed the names of its five finalist comic books on December 9. The winner will be announced on January 6 by Antoine de Caunes, live from the Popopop program.

Sponsored by Antoine de Caunes since its creation, the Fnac France Inter Comics Prize aims to celebrate the ninth art in all its diversity and make it accessible to all audiences. The jury, chaired by the host of Popopop and bringing together Fnac journalists and booksellers around a common passion, will designate the lucky winner from among the five comic strips selected beforehand by the thirty members of the general public jury of the Prize, to which the twenty-two heart of Fnac booksellers. The winner will then be invited to receive their prize at the Maison de la radio et de la musique in Paris, then will see their work highlighted in Fnac stores and supported by France Inter. A Prize which recalls the role of cultural prescriber of these two French institutions which regularly show their support for current artistic creation. Last year, the Prize rewarded Carbon & Silicon (Ankama Éditions), the post-apocalyptic SF story by Mathieu Babet.

A vertiginous adaptation of George Orwell’s dystopian classic published in 1949. A timeless and more current than ever masterpiece – it is to Orwell, for example, that we owe the concept of Newspeak – brilliantly adapted by Xavier Coste, whose the graphic palette evokes the chilling atmosphere of this control society where Big Brother always watches over the grain.

From a simple photo of a young woman with wavy hair on a summer beach, Jim, comic book author, and Laurent Bonneau, scriptwriter, unfold a 300-page story about a sculptor and his model, who reinvents itself plank after plank. Intense and confusing.

The graphic novel adapted from the eponymous book by Martin Winckler skilfully combines emotion and pedagogy and lifts the veil on gynecological care. After recounting her abortion in I have to tell you (Casterman, 2019), Aude Mermilliod returns with a poignant and humanist story that looks at women’s relationships with their bodies and also at the sensitive issue of intersex.

The moving story of Coco, press cartoonist at Charlie Hebdo, who recounts page after page of her life after the Charlie Hebdo attacks of January 7, 2015 and her long road to reconstruction.

reminding Grapes of Wrath by John Steinbeck, this comic follows a young journalist witnessing the Dust Bowl and the catastrophic consequences on the farmers of the affected region, between Oklahoma, Kansas and Texas. The author thus revives these photographs from the 1930s that have since been printed in the collective imagination and produces a fascinating reflection on the very notion of frame.