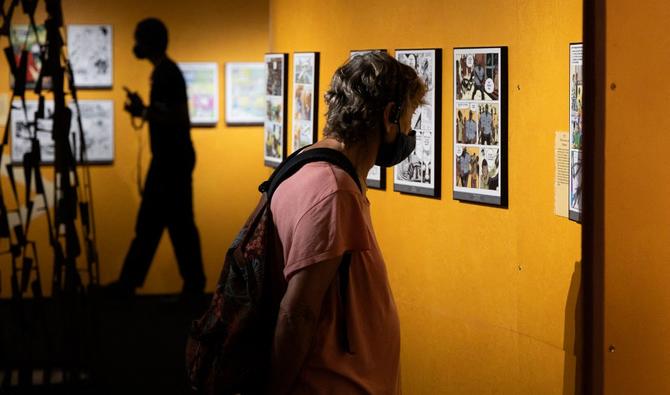 ANGOULEME: The Angoulême International Comics Festival is back, without a mask or vaccination pass, after having had to cancel its 2021 edition and postpone that of 2022.

Gloom in January, when a wave of Covid-19 contaminations had prevented the famous comic book meeting from being held on the usual dates, which is held in the small town in the south-west of France. But optimism in March, with favorable weather and the timely lifting of health restrictions.

“We will thus reconnect with the pleasure of sharing, of encounters, of the freedom to express ourselves and to exchange around comics”, writes the direction of the Festival.

The 49th begins Wednesday evening with a ceremony (by invitation) at the Angoulême Theater, with “a concert of drawings dedicated to Ukraine”.

“This collective performance will bring together many comic strip artists, representing more than ten nationalities, who will unite to propose, on a scenario by Alfred (French author, editor’s note), a story in drawings evoking the Ukrainian situation” , with the Franco-Ukrainian Dimitri Naïditch on the piano, said the festival.

On this occasion, the most prestigious award in the world of comics will be awarded, the Grand Prix de la Ville d’Angoulême.

It will be a woman, which is relatively rare: since its creation in 1974, only Claire Bretécher, Florence Cestac and Rumiko Takahashi have won.

Are in the running the French Pénélope Bagieu and Catherine Meurisse, already finalists in 2021 and beaten by the American Chris Ware, as well as the Canadian Julie Doucet.

Paid signings
Pénélope Bagieu is the best known to the general public, since the immense success of her “Joséphine” series at the end of the 2000s. Catherine Meurisse, from the same generation of young people in her forties, is a former Charlie Hebdo employee. Finally, Quebecer Julie Doucet had a short but remarkable “underground” career, concentrated between 1988 and 1992, and ended in 2006.

This 49th edition of Angoulême, open to the general public from Wednesday to Sunday, also marks the return of exhibitions.

One of them will be a retrospective of Chris Ware, the king of American “comics”, who is making the trip after having to stay at his home near Chicago at the time of his Grand Prix in 2021. Others are devoted to the character who is all the rage in playgrounds, Mortelle Adèle, by the French Aude Picault, to the relationship between comic strips and animated film, or even to one of the legends of manga, Shigeru Mizuki, for the centenary of His birth.

Another novelty will be the remuneration of the authors present for dedications. The Ministry of Culture announced on Friday the signing of a protocol providing for “lump sum remuneration”.

This subject was very sensitive for the Angoulême Festival, threatened with a boycott in 2021 by authors dissatisfied with not drawing any fruit from the popular success of the event.

But there was another controversy instead, with the resignation of the jury of a prize awarded on Saturday, the Eco-Fauve Raja. In February, the jurors all resigned to denounce the name of this award, which includes that of a packaging industrialist.

His maintenance showed how much the Festival, which has been struggling with notorious financial difficulties since the cancellation of its 48th edition, needed this partner more than ever, who has been present “for years now, in good and bad times”.

The Angoulême International Comics Festival is back