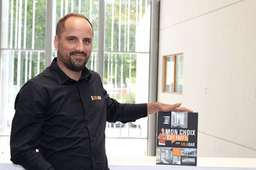 ﻿Since 1976, at 195 Piccadilly in London, has been the headquarters of the British Academy of Film & Television Arts, the academy that awards the equivalent of our Caesars, the famous Bafta Awards. The building, built in 1884 for the former Royal Institute of Painters in Water Colours, was dilapidated, and the renewal of the lease with the Crown Estate was an opportunity for the academy to invest in the renovation of this historic building, which had a few surprises to offer. Beginning with decorative plaster structures that supported two large original 19th century chandeliers, obstructed when the academy moved in 1976 and thought to be lost. Above were also hidden metal roof canopies.

And it is on these two crucial points that the architectural firm Benedetti Architects played to win the call for tenders in 2014: “Our strategy was to restore this lost space and create a 4th floor. This was the most efficient way to retain the Princess Anne Theater (a room below) while allowing the public to access this important historical heritage. A heritage which was therefore the focal point of this architectural restoration of 33 M£ (38,728,800 M€). In particular, it was necessary to cover the entire site in order to restore the plaster elements and the structure of the Victorian chandeliers.

The other important issue was the creation of a new glass roof bringing light to the 4th floor and offering the visitor a view of the canopy of the courtyard of the Saint-James church. Its design posed a major problem: “The southern exposure and the almost entirely vitrified floor were not the ideal configuration for this room which hosts the bar-restaurant”, explains the architectural firm. But during the search for alternatives that turned out to be “unimpressive”, such as the installation of blinds, the company Merck had the brilliant idea to release, via its brand Eyrise, the glass Dynamic Liquid Crystal Glazing. “This solution suppresses 91% of light and heat rays, but provides 44% light transmission when light is needed on cloudy days. All this while remaining transparent and clear at all times. The innovative material is nevertheless based on old technology, as Eyrise marketing director Filip Roscam explains: “Most devices, such as computers or laptops, are designed with liquid crystal screens. With our solution, the liquid crystals are inserted between two fairly thin glasses that leave a space of a quarter of a hair. And the marketing director makes this simple comparison: “A window can be considered as a pixel that can change color. »

Profile of a window

Technology : licrivision, transparent solution of liquid crystals, in which specific colors can be added.

In double and triple glazing, with the possibility, depending
liquid crystal solutions, to have rates
variable light transmission (darker
and clearer).

Thus, 82 windows of this type were placed on the identically reproduced glass roofs of the building. Each has its electronic link with a central control system. Thanks to solar sensors, the windows adapt their opacity according to their exposure and change appearance in a second to manage brightness and temperature. The reduction in the building’s carbon impact was significant, dropping from 154.53 to 42.4 kg/CO2/m2, enabling it to obtain an EPC (Energy Performance Certificate) rating, the equivalent of the French DPE, “B” against “G” before works. At the end of this extensive renovation which lasted seven years and ended in September 2021: an increase in the building’s surface area, from 2,050 m2 to 2,465 m2, a useful 4th floor, renovated plaster structures and two terraces facing Piccadilly Street and the courtyard of St. James’s Church.

The BAFTA headquarters in London renovated with an LCD glass roof