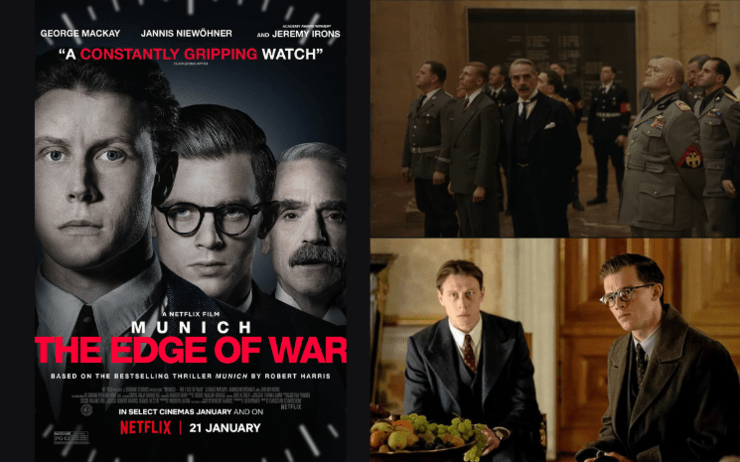 The Vise of Munich premiered a few days ago on Netflix. Adapted from a novel, the film is set against the backdrop of the Munich agreements signed between France, Germany, Great Britain and Italy in 1938.

Munich is the scene of tough negotiations in the new Netflix movie, The Vise of Munich. The leaders of the British and French government are greeted with hope by the German population who fear the specter of war. A situation which is not without echo with the current tensions on the Russian-Ukrainian border, judge Guillaume Erner, journalist at France Culture. How did the Munich agreements unfold and did they bring peace to Europe?

The vice of Munichwhich arrived on the streaming platform in January 2022, is directly adapted from a novel by robert harris, Munich. This immerses us in September 1938, when Europe has its eyes fixed on Hitler and his desire for conquest towards Czechoslovakia. British Prime Minister Chamberlain travels to Munich to meet the German Chancellor. The fate of two childhood friends, Hugh Legat and Paul Hartmann then intersects again. The first is Chamberlain’s private secretary, while the second is a German diplomat and secretly foments an attack against Hitler. How far will they be willing to go to preserve the peace? If the two main characters are fictitious and their story too, The Vise of Munich is largely based on the historical facts that took place in 1938 in Munich. He is named for the BAFTA for “Best British Film”.

The historic negotiations of the Munich agreements

In March 1938, Germany invaded Austria. After this first annexation, Adolf Hitler turns his gaze to eastern Germany, where the Sudetenland is located. The German Chancellor claims this region of Czechoslovakia, inhabited by a majority of German speakers. Europe fears war, and France even more, because it signed an alliance with Czechoslovakia in 1924. On September 23, 1938, Hitler announces the annexation of the Sudetenland for October 1. As France and its allies prepare for war, Benito Mussolini urges Hitler to hold a last-ditch conference with the European powers to avert war. A Conference of Four brought together Great Britain, Italy, France and Germany on September 29 and 30, 1938, in Munich. Édouard Daladier and Neville Chamberlain wished to avoid war at all costs, just like Benito Mussolini, who sought to discourage Hitler’s desire for conquest, for fear of a European conflict.

The Munich agreements were signed on September 30, 1938. They forced the government of Czechoslovakia to evacuate the Sudetenland before October 1 and to dismantle its border fortresses. The agreements sacrifice Czechoslovakia for peace in Europe and leave a mixed taste in the mouths of Chamberlain and Daladier. Already Winston Churchill predicted in a letter before the conference: I feel like we’re going to have to choose for the next few weeks between war and dishonor, and I have little doubt about the outcome of that choice.. The two French and British leaders expect boos on their return to England and France, in the face of this betrayal of the government in Prague. This is not the case, however, and the populations even cheer them when they get off the plane, considering that they have avoided a serious conflict.

One year after the Munich agreements, the Second World War breaks out

If the allied powers welcome the peace agreements obtained on September 30, 1938, these do not make it possible to avoid war, a year later. On September 9, 1939, Germany invaded Poland. Two days later, France and England declared war on him. A conflict lasting almost six years ensues and causes the death of nearly 18,000,000 civilians and soldiers in Europe. As Hugh Legat asserts at the end of The Vise of Munichthe agreements are only a reprieve before the war.

The Vice of Munich, the new Netflix film replays the tension of the Munich agreements