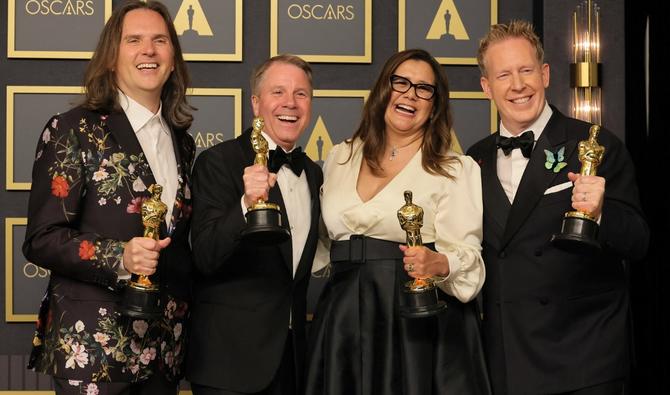 HOLLYWOOD: The Disney magic once again worked on Sunday evening at the Oscars where “Encanto, the fantastic Madrigal family”, a celebration of Colombia, its culture and its traditions, won the prize for best animated film.

“Encanto” tells the adventures of an ordinary teenager, Mirabel, born into a family in which each member is endowed with magical powers, in the heart of the Colombian mountains.

To the rhythm of Vallenato folk music, with coffee and cornbread, the Madrigal family puts their magic at the service of their village, but when it begins to disappear, everything is called into question.

“I am so proud to have participated in this film which highlights beautiful characters and represents diversity, and the fact that, everywhere, people recognize themselves in the film”, declared producer Yvett Merino on receiving this award. .

The soundtrack plays, as often, a very important part in this Disney animated film, which was also in the running for the Oscar for best song with “Dos oruguitas” (“two little caterpillars”), written by Lin- Manuel Miranda and interpreted by the Colombian Sebastian Yatra. But it was ultimately pop star Billie Eilish who won the day, for “No Time To Die”, the title of the latest James Bond.

The sentimental ballad “Dos oruguitas” is associated with one of the strongest moments of “Encanto”, when Grandmother Alma evokes the memory of her husband, killed in his youth by armed invaders.

An explicit reference to populations forced to flee armed conflicts, in Colombia as elsewhere, a theme also present in the animated documentary “Flee”, with which “Encanto” was in competition.

Although 15-year-old Mirabel is the central character of the story, “Encanto” features each of the twelve members of the Madrigal family, even Bruno, the clan’s ugly duckling.

“We knew he was going to get attention,” co-director Jared Bush told Variety magazine.

The success is such that the song associated with the character, “We don’t talk about Bruno”, which mixes Cuban rhythms and hip-hop phrasing, has become one of the most listened to and has been a hit in the rankings.

“Every family has an outcast, or someone who feels rejected. I think that’s one of the reasons this character picked up. A lot of people feel like black sheep,” the co-star said. directed by Charise Castro Smith.

“Encanto” also stands out from the great Disney classics by its concern to represent diversity and to allow spectators to identify with its gallery of characters. “On TikTok, I was impressed with how much people connected with the film,” Jared Bush said.

The Oscars, who have often been criticized for the lack of diversity in their choices, with in particular the #OscarsSoWhite movement on social networks, should not complain about it.

With “Encanto” and its magic, Disney bewitches Hollywood and wins an Oscar