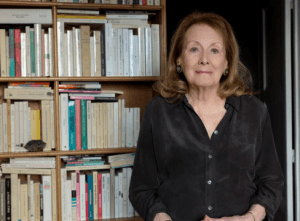 The Gallimard publishing house has reason to rejoice, fourteen years after Jean-Marie Le Clézio’s Nobel, seven years after that of Patrick Modiano, the new winner Annie Ernaux is the sixteenth person of French nationality to be awarded the famous prize – the seventeenth woman out of 114 awards given since 1901-.

Annie Ernaux, passion for writing, a work with a sociological and political dimension.

The winner of the 2022 Nobel Prize in Literature has published more than twenty short personal novels.
A figure of feminism, engaged on the left, her books, brief intimate texts, evoke a woman’s daily life in a work nourished by her intimate history and the observation of others “she speak [aux femmes] things that men cannot talk to them about.

Born in 1940, the author evokes in detail her environment of “dominated”, that of the working world. In Years (2008), she traces a faithful account of living conditions in the 1950s, a kind of post-war radiography. Difficult and unequal living conditions in a devastated France, as illustrated by their photographs Cartier Bresson and Doisneau. The country did not experience reconstruction at an accelerated pace until the 1960s. The author draws up a real inventory, without however mentioning the social ascent due to the merit from which she benefited, nor the economic and individual emancipation experienced by the population and especially women from the “Glorious Thirties” .

His texts are above all personal, intimate, moving – an emblematic work a work that addresses the intimate feelings of women. Simone de Beauvoir and Benoîte Groult hailed in her first books Empty Cabinets (1974) and what they say or nothing (1977) descriptions of gender inequalities in marriage and childbirth.

With The place (1983) written after the death of her father, she accentuated her project of ” give all life the dignity of writing “. She evokes the modest house of her childhood, seeks to rediscover real life in a partly forgotten past, to rediscover the memory of the present, to overcome a prohibition by recounting this modest life.

Yes, because her generation recognizes herself, she creates empathy with her readers, retraces her life – like that of any woman -. The writer points out: I used my life and my feelings “He has sometimes been criticized” what and how [elle] speaks “, animated by a strong feeling of social defector coming from her origins: the unspeakable shame, she chose to “ return this shame. I will write to avenge my race, by writing I got closer to this desire », the revolt is often at the origin of his books.
In The Event (2000), she recounts her clandestine abortion in the 1960s (the Veil law was passed only in 1975) the unbearable situation of women because motherhood was then often experienced as imprisonment.

Her texts evoke the journey of a free woman – free because society has evolved – in a way as the repository of something: the truth of memory. His writing, sometimes characterized as neutral, is the fruit of a long process, work of reconstructing the feelings of the past, without complacency, density of sentences, of words. She consciously exposed herself to scandal through the subjects of her novels, the writing is not neutral. Nowadays, writing has been liberated. His texts are a literary genre in themselves by the extreme singularity of his writing. ” I could see how by writing about myself, I was writing for others, by talking about myself, I touched on the universal “. She invented a completely new literary form, no narcissism, rather a self-sacrifice, a work of memory and knew how to upset the reader with economic, bodily, psychological precisions.

The Academy hailed this ” autofiction with a social dimension », this anthology by Annie Ernaux by itself.

The modernity of the new winner

By putting words to feelings, she influences new generations. Thus Audrey Diwan’s film ” The event (2021) is an adaptation of the eponymous novel, the film received the Golden Lion at the Venice Film Festival. Danielle Arbid adapted (2020) “ easy passion » of the homonymous novel published in 1992 and Régis Sauder made a documentary (2020) on the city of Cergy-Pontoise « I liked living there “, new town, in the suburbs of Paris where the winner lives.

Prizes obtained by the writer: