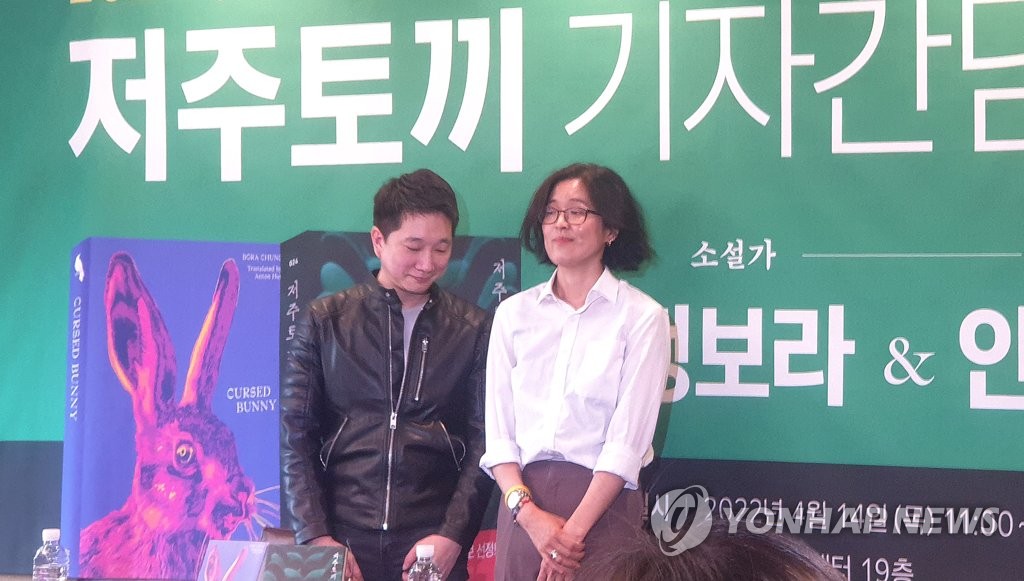 SEOUL, April 14 (Yonhap) — Chung Bora, the author of “Cursed Bunny,” shortlisted for this year’s International Booker Prize, on Thursday expressed her gratitude for the love and warm reception her writings have received. aroused.

“When I wrote this novel, I had no idea what it was going to be like. I didn’t have big intentions,” Chung said at a press conference in Seoul. “I have never received this kind of attention”.

An English translation of his novel published by Britain’s Honford Star was chosen earlier this month as one of six finalist works for the 2022 International Booker Prize, one of the three biggest literary prizes in the world.

Chung became the second Korean author to make the shortlist after Han Kang, who made it in 2016 and 2018 with “The Vegetarian” and “The White Book,” respectively.

The book’s publishing rights have been sold to 15 countries, including the United States, Japan and Germany, following this nomination.

Published in Korea in 2017, “Cursed Bunny” is a collection of 10 sci-fi short stories on the theme of curse and revenge.

“I wanted to turn a cute little bunny into a scary bunny,” she said. “I try to make the story as unreal as possible because someone can be hurt by my writing. I want to distort realistic situations in the opposite way.”

The author, who earned a master’s degree in Russian and East European studies at Yale University, said her literary fondness for science fiction and fantasy horror novels was affected by Russian literature and is -European of the early 1920s.

She added that she is currently working on a seafood story based on her life in a coastal city in southeastern Korea. She nevertheless wishes to tell stories about the pain of minors who are victims of international or regional military conflicts.

“I heard that there are 26 conflict regions in the world,” she says. “I know there is so much pain and loss in the world, but I can’t write it into my story now. It will take me time to look for ways to respect the victims.”

Anton Hur, who translated “Cursed Bunny” into English, said he was fascinated by Chung’s book for its creative blend of horror and humor. He also translated “Love in the Big City” by Park Sang-young, which did not make the cut.

“Chung’s sentences contain beautifully chilling and humorous sentiments,” he said at the press conference. “It is easier to translate the combination of extreme feelings”.

He will continue to work with Chung to translate two publications, including his novel “Red Sword” (2019) which will be published in Britain next year.