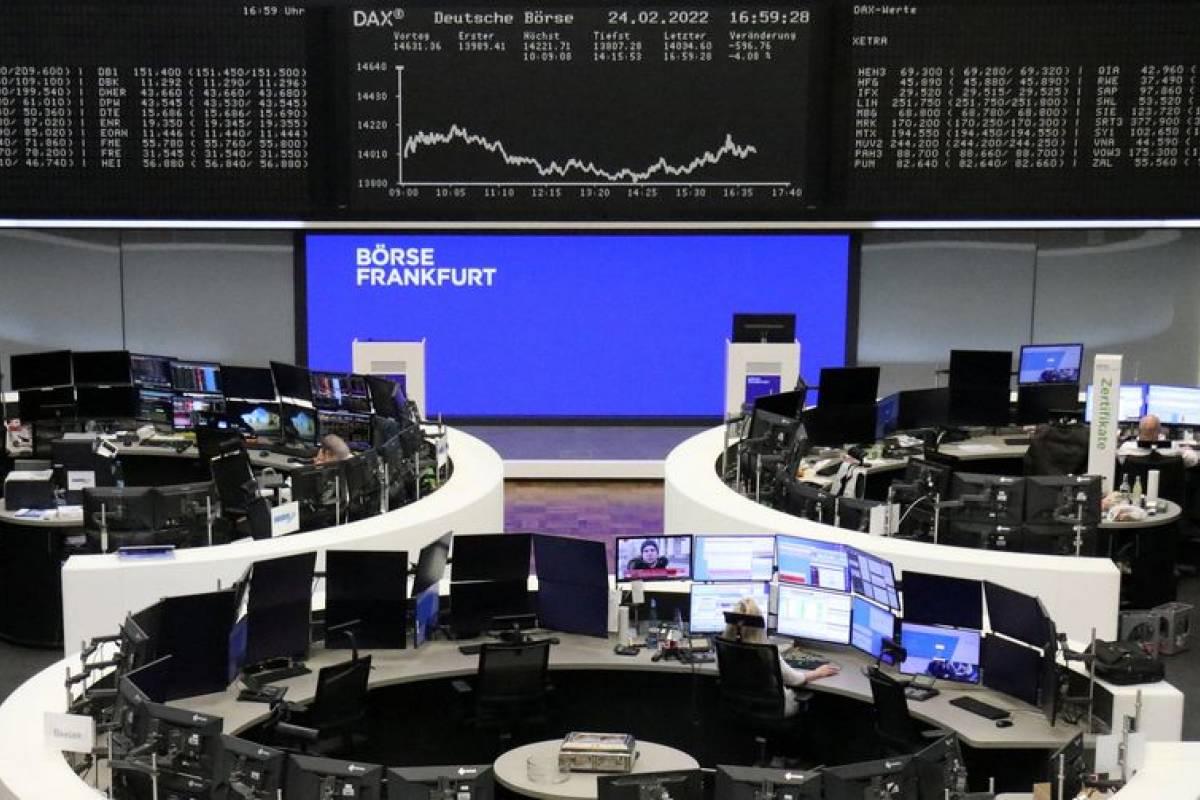 EUROPE FINISHES IN THE RED

PARIS (Reuters) – European stocks ended sharply lower on Thursday and Wall Street was in the red mid-session after Russia’s military assault on Ukraine and as Westerners prepare to impose new sanctions in Moscow.

According to the Ukrainian police, fighting is taking place almost everywhere on Ukrainian territory, including at the site of the former Chernobyl nuclear power plant.

As Western countries prepare a new salvo of sanctions against Moscow, China has refused to talk about a Russian invasion and has said that it understands Russia’s “legitimate concerns”.

“While the invasion is not a complete surprise, the stock market still takes a sell-first, ask-questions-later approach,” says Ryan Detrick, strategist at LPL Financial.

The EuroStoxx 50 volatility index ended up 13.9% in Europe after rising to 40 points, its highest level since June 2020. Its American equivalent rose 8.6% to 33.8 points after touching 36.8 points, the highest since January 24.

In Paris, Societe Generale and BNP Paribas fell by 12.1% and 7.4% respectively, while the European financial sector adopted several measures to protect itself from the Ukrainian crisis.

According to data from the Bank for International Settlements (BIS), European banks, especially those from France, Italy and Spain, have the most exposure in the world to Russia.

In the automobile sector, Renault, exposed to Russia via the manufacturer Avtovaz, which it controls, fell 9%.

Defense groups such as the French Thales, the British BAE Systems and the German Rheinmetall, on the other hand, gained from 3.3% to 5.1%.

All the sectoral compartments of the S&P evolved in the red, with the exception of high technologies (+0.1%).

The banking sector shows one of the largest declines (-4.3%) with Bank of America Corp, Citigroup, Wells Fargo and Goldman Sachs Group, which dropped 2% to 5%.

Oil prices are soaring as the Russian offensive in Ukraine raises concerns about its impact on global energy supplies.

The dollar is up 1.3% against a basket of benchmark currencies after gaining as much as 1.501%, its biggest gain since March 2020, when the first wave of the COVID-19 pandemic began.

Widespread risk aversion is causing strong demand for sovereign bonds, driving up their prices and lowering their yields.

On the London Metal Exchange, aluminum hit a record high of $3,443 a tonne before falling to $3,397 amid anticipation of Western sanctions that could affect supply chains from Russia, the metal’s main producer. .

THE INDICATORS OF THE DAY

The gross domestic product (GDP) of the United States in the fourth quarter which was revised slightly upwards to 7.0%, at an annualized rate.

Jobless claims, they fell more than expected last week to 232,000 in the United States.

Europe ends in the red after Russian invasion of Ukraine