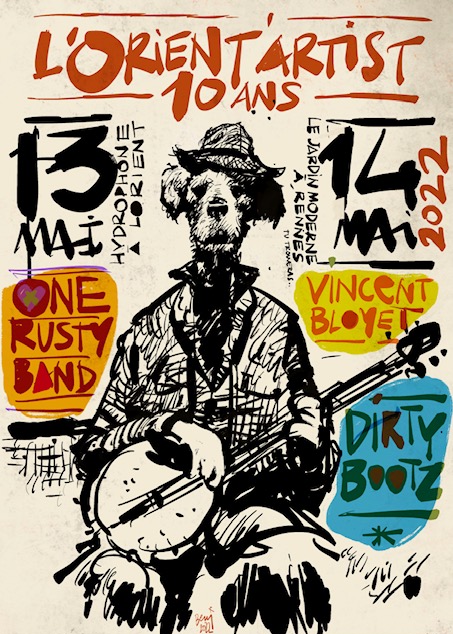 
How was the association L’Orient’Artist born?

Kristell Arquetoux, creator of L’Orient’Artist: I worked within another structure, Tootaphone, a musical association whose origins are linked to the Lorient group Mécaphone. I worked there for two years and, when the association stopped, I created The Orient’Artist so that there is a grid of activity and support the groups that I accompanied at the time.

Precisely, what is the objective of the association?

It’s a production office. The objective is to produce Breton music groups, all styles combined. At least at the start. It was too complicated to defend everything in all directions, so we refocused on a blues and blues rock aesthetic while expanding the territory.

What bands are you currently following?

I have three projects. Vincent Bloyet, a young artist from the country of Redon (Ille-et-Vilaine) in a one-man band, whose first EP (mini-album, editor’s note), “Step on Your Groove”, was released in May. Dirty Bootz, duo from Montpellier, for those nostalgic for Nirvana. Their first album (of the same name) was released in 2019. The third project is One Rusty Band, a duo of Bretons from Ruffiac (Morbihan). It’s a unique tap dance guitar project. It is an emerging project.

What do you remember from these ten years?

Having accompanied Bobby & Sue for seven years. It was a great adventure. I met them at Vieilles Charrues in 2012. It’s three albums, a Le Télégramme Record Prize in 2016, great concerts like during the jazz festival in Tangier, Lithuania and an opening act at La Cigale. I supported them and helped them grow.

It is also the difficult stage of the past two years that has put the association in danger because, when it comes to the development of artists, there are trains not to be missed. But this period allowed me to take time and step back, to put the structure back into strategy. This allowed me to hire Valérie Hue as a production assistant.

There is an ultra-liberalization of religious exception, it goes against what we defend, an artisan side of music.

How do you see the next ten years?

For the structure, positively. In less than a year, a booking person will be recruited to expand the catalog, support the territory and continue to develop. We are a small economy but it is viable. I fear the crisis less, the structure is healthy, autonomous and independent. I am less serene for the future of current music. There is an ultra-liberalization of religious exception, it goes against what we defend, an artisan side of music. I defend popular culture.