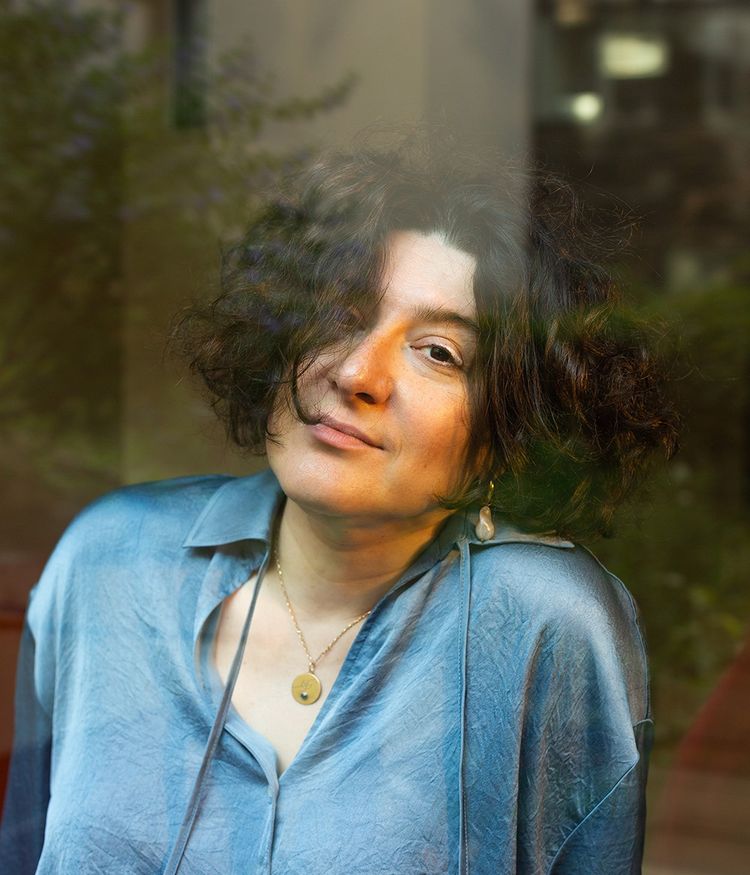 She doesn’t talk, she sings. Beneath her amazon mane, there is a mixture of sweetness and brazen strength. It is this contrast that is striking at first sight. At 50, the poet-writer Maria Stepanova – who fled Moscow for Berlin in March, along with many Russian intellectuals, such as the director Kirill Serebrennikov – has been writing since childhood. She also devours an average of one book a day. His testimony is valuable. Author of several essays and a dozen collections of poetry (including Contre le lyrisme, in 2017), she is now publishing a documentary novel in France in the form of a family chronicle, In memory of memory(Stock), already translated into 27 languages. Like a huge backward tracking shot of contemporary Russian cultural life and the rubble of the Soviet era.

A veritable literary phenomenon, this melancholy chronicle of a century of Russian history, seen through the prism of its own family past, received the Bolchaïa Kniga prize (the Russian equivalent of the Goncourt) in 2018 and was a finalist of the International Booker Prize. “I myself was surprised by this impact. I wrote this book for members of my family who no longer exist. So I was writing for the dead, I tried to please the dead…I never tried to be conciliatory”, Maria Stepanova is modestly surprised. She also cites semiologist Tzvetan Todorov’s duty to remember and his obsession with the past.

“ In Russia, the past becomes a new cult. Young Russian generations, like young Americans or Germans, are totally terrified of the future. They have no idea what will happen to themnotes the exiled writer bitterly. In Russia, all they have left is the past which is also totally terrifying, but at least we know the script. The future is no longer something we build collectively. »

The power of docufiction

A true literary wandering, where we find, in turn, Pushkin, Boris Pasternak, or the great Russian poet, Ossip Mandelstam, author of noise of time, Maria Stepanova’s novel is more like a documentary, an essay between fiction and non-fiction. He wants to follow in the footsteps of the great German writer Winfried Georg Sebald, whose entire work navigates between autobiography, biographies and true fictions… There is a desire in her to revisit the definition of fiction. “Maybe the ‘old school’ way of looking at a story doesn’t work so well anymore. Today, there are urgent stories to explore. We need to be closer to reality. New readers are increasingly fascinated by non-fiction literature,” explains Maria Stepanova.

The writer sees in it a form of resurgence of 19th century literature.e century which had an enormous interest in epistolary correspondence, memoirs and logbooks. But unlike the author of LimonovEmmanuel Carrère, who fits more “in the tradition of Tom Wolfe” Maria Stepanova wishes “keep the ambiguity between the real and the fictional. I don’t want the reader to be sure they have the real thing”.

The myth of massive support for Putin

Although it was first published five years ago in Russia, his book is also intended as a way of bearing witness to the “return of the disaster”. Putin’s Russia is a “parody copy” of the old Soviet Union. “But the West is in full denial about the war: this is a serious mistake. Nobody seems to really understand that this conflict can win over the whole of Europe. You can’t blame people for not being scared enough.”, she admits. His pet peeve remains the myth of the massive support of the Russian population for Putin. “The number of people who support the invasion in Ukraine is much smaller than you think. The support is purely rhetorical she sighs.

If she estimates only 15 to 20% the level of real support for Putin, against 20 to 25% of real opponents, she also recognizes that “No one really knows. Because 70% of Russians lie when they are questioned for polls. In any case, the great myth of the stability of society, which Putin wanted to sell to the Russian people, never worked. He was completely shaken by the second war in Chechnya, then the war in Georgia…”

Poet recognized for fifteen years in Russia, Maria Stepanova – not to be confused with Yuliya Stepanova, the Russian athlete who launched the alert on doping – has become an emblematic figure of the new Russian literary generation. She also created one of the few independent news media in her country, the online magazine Colta.ru, financed through crowdfunding to ensure its autonomy. This cultural journal, a sort of Russian equivalent of the The New York Review of Bookslaunched in 2008, was banned by the Russian government last March. “It is no longer accessible on Russian soil. We had 800,000 visitors a day: for a cultural site, that wasn’t so bad… But without an audience that’s not possible. »

Like other independent Russian publishers (Meduza, Dojd…) who have gone into exile in Latvia or elsewhere, Maria Stepanova is looking for opportunities to restart the site from abroad. A guest teacher for several years in Berlin and the United States (Berkeley, Stanford…), she decided not to return after the invasion of Ukraine. And left Moscow on March 8. Invited in the spring to teach at Columbia University in New York, she decided to stay in the West… “I never wanted to emigrate and I would be happy to return to Russia. I don’t consider myself an emigrant or a Russian resident, I’m more in between. But since February 24, you can no longer live freely as a writer in contemporary Russia, because no one is going to publish my work anymore.»

Since the invasion of Ukraine, most Russian writers and intellectuals have left their country for Georgia, Armenia or Turkey. “We are in a situation comparable to that of the characters in the film ‘Casablanca during the Second World War: stuck in middle countries. Today, we are forced to withdraw into former Soviet republics, such as Georgia or Armenia… It’s tragic, because these countries are very small and very dependent on Russia. » Until last year, a director like Kirill Serebrennikov could still do whatever he wanted. Since the invasion of Ukraine, everything has changed. Like Maria Stepanova, he now lives in Berlin. His experimental theatre, the Gogol Center in Moscow, a center of cultural life for years, has been closed.

On September 5, 2022, the Russian justice sentenced Ivan Safronov, one of the best Russian investigative journalists, a specialist in military issues, to twenty-two years in prison, for “high treason”. “ They put him in prison to make an example. No longer will a journalist say a word about what is happening in the Russian army. Now they’re even suing influencers on Instagramsays Maria Stepanova. It’s a lottery: there is no logic other than to scare as many people as possible. It encourages others to remain silent. » The strategy of intimidation by example well known in the Soviet era.

Eszter T. Molnar: “Language is an important part of personality”
The NBA could settle in Seattle and Las Vegas as early as... 2024
2022 World Cup: "They are merciless!" Rents are soaring in Qatar, tenants and fans are paying the p...
Tweet
Share
Share
Pin
Other links: https://awardworld.net/resources/