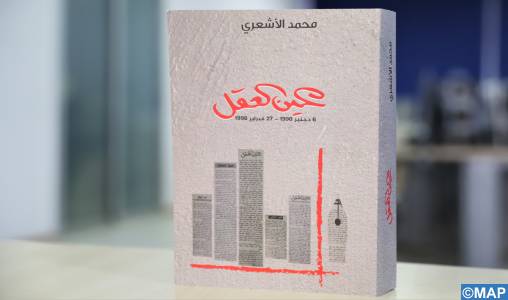 Rabat – The novelist and poet Mohamed Achaari has just published a book which compiles the articles he had previously written as part of an open forum ”Ain Al Aql” (the way of wisdom) in the Arabic daily ”Al Ittihad Al Ichtiraki” (1990-1998).

In his presentation of this rather voluminous work (741 pages, medium format), the author confides to the readers his hesitation to publish it because this type of opinion piece reflects a reaction and a commentary on a current topic. , before changing his mind for two reasons.

First, in response to the suggestions of his friends who encouraged him to republish these articles, which are an eloquent testimony to one of the most significant political times in the history of Morocco, punctuated by major national, Arab and international ones, in particular social demands in Morocco, the Palestinian cause, the war in Iraq or even the collapse of the Soviet bloc.

”For me, these articles which comment on these events for an informative purpose, often in a satirical form, are still relevant since they offer the possibility of reading them from an angle other than that of instantaneity, and therefore present themselves as a testimony to an era that goes back more than 30 years,” he explained.

The second reason behind the publication of the book is that these articles reflect “my close relationship with writing and my passion for the Arabic language in which I express myself”.

Referring, moreover, to the motivations behind the publication of his open forum “Ain Al Aql” originally signed under the pseudonym “Abou Fares”, Mohamed Achaari reveals that the idea was initially to write a “succinct and satirical post” , but, over time, it has become a compendium that echoes opinions shared by many people, before becoming, like any other post, a difficult, if not impossible, counter-opinion. to dissociate from the political and ideological frame of reference that shapes it.

On the relevance of re-reading articles published three decades ago, he believes that these writings can be approached as a model of classic journalism of the time, at a time when political life was going through a painful change with a view to open a new page in the country’s history, but also as a testimony to a time when the partisan press occupied a prominent place in the profession, without the internet, smartphones or social media.

In this vein, he argued, the book could more or less help shed light on the period before the political changeover, marked, among other things, by social demands, political issues, differences over political reform, the amendment of electoral laws and the organization of transparent elections.

He considered that it is necessary today to deliver an objective criticism of this political experience so as to define a new vision of change and not to dwell on the improbable ruptures, noting that “Morocco needs today today of a new project carried by new generations in a context marked by the decline of the parties, the sluggishness of the unions, and the disaffection of the citizens for the political thing.

Finally, the author would like to point out that he dedicated his book to his friend the journalist Mustapha Qarchaoui, who died in 2005 at the age of 66, and to his other friend, the journalist Mohamed Brini, noting that his work can be also considered to belong to the genre of literary journalism for its way of addressing hidden facets of reality that can only be possible through literature.

Born in 1951 in Moulay Idriss Zerhoun (Meknes), Mohamed Achaari published his first collection of poetry “The neighing of injured horses”, in 1978. In 2020, he received the Argana international poetry prize.

Former President of the Union of Writers of Morocco (1989-1996), he has worked in journalism, notably as editor-in-chief of several supplements and literary magazines. Also known for his political and union commitment, he sat after the 1997 legislative elections in Parliament before being appointed Minister of Culture and Communication (1998-2007).

Mohamed Achaari is the author of several novels and short stories, some of which have received prestigious awards, among others, “The bow and the butterfly” (Arabic Booker Prize in 2011), “The Box of names”, “Three nights” or “Of wood and earth”, published in September 2021 by Al Moutawassit editions.