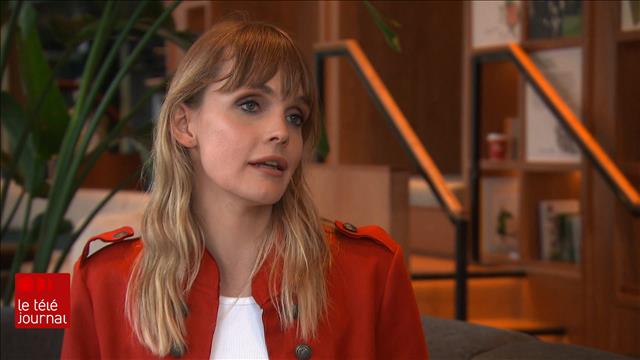 Thank you to the booksellers for hosting The daughter of herself within your heart and to take this journey with her with so much lovereacted the author, who at the same time collected a scholarship of $ 10,000.

Your contribution to Quebec literature is crucial and vital. This award means anything is possible, as long as believing and writing come from the same sourcecontinues the one who is also an actress and activist for the LGBTQ + community.

To note that The daughter of herselfthe first French-language autofiction written by a trans woman in Quebec, is being adapted for television.

The Booksellers’ Prize 2022 in the novel category was awarded to Gabrielle Boulianne-Tremblay for her book on transidentity “La fille d’elle-even”. The award is significant for this writer, actress and activist for the LGBTQ+ community. A report by Louis-Philippe Ouimet.

Six other prizes were awarded during this gala organized by the Association des libraires du Québec (ALQ) and hosted by actress Émilie Bibeau. Nearly 250 people gathered at Club Soda in Montreal for this annual event, which was presented virtually on Facebook in 2020 and 2021.

The selection committees of the ALQ, which brings together more than a hundred independent bookstores in the province, voted during two months of voting.

In the Quebec Essay category, Camille Toffoli wins for corsair girlsa feminist book dealing with different subjects such as love, social struggles and karaoke. The majority of the texts that make up this essay were written when I co-founded the feminist bookstore L’Euguélionneshe says.

” The profession of bookseller allowed me to grasp how much literature could concretely transform people’s lives. »

Camille Readman Prud’homme is the winner in the Quebec Poetry category for her first collection, When I say nothing I still think. If books are objects that are both solitary (in their reading) and collective (in their experience), it is you who reveal their mobility.she pointed out to the jury.

The little astronaut, by Jean-Paul Eid, which tells the story of a boy living with severe cerebral palsy, was crowned Quebec Comic of the Year. The work had also won the ACBD Critics’ Prize in January.

In terms of international categories, the novel Our part of the nightby Mariana Enriquez, was awarded by the ALQ. A great book, of astounding power and originalityassures Catherine Drouin, of the Librairie Pantoute.

This Argentinian novel was translated by Éditions du sous-sol, a department of Seuil specializing in the literature of the Americas.

Sleeping Woods René.e, by Elene Usdin, is the winner of the best comic book outside Quebec. The French artist, who has already stayed in Sherbrooke and Montreal, says she carries Quebec in her heart.

It is through my voice as an author and my sensitivity as an artist that I endeavored to express the strength that I felt in the Canadian forests, but also the violence of the forced adoptions of First Nations children; drama that sits in the backdrop of my graphic novelshe explains.

Finally, the Prix d’Excellence from the Association des libraires du Québec was awarded to Billy Robinson, from the Librairie de Verdun, in Montreal. The bookstore stood out for his communicative passion, says the ALQ. A distinction that earned him a $2,000 scholarship awarded by the Ministry of Culture and Communications.

The winners of the 2022 Booksellers’ Awards:

The daughter of herself, best novel at the Prix des libraires du Québec