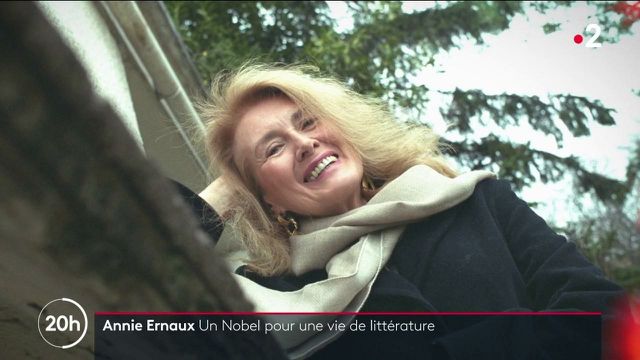 Annie Ernaux, one of the major figures of the contemporary literary scene, received the Nobel Prize for Literature on Thursday, October 6. The 82-year-old writer is rewarded for “the courage and clinical acuity with which she discovers the roots, the distances and the collective constraints of personal memory”explained the Nobel jury.

With a work that feeds on the story of her own life, on an emancipation that is both intimate and social, the novelist has become a “intellectual reference” for all a generation that came to feminism in the wake of the #MeToo movement”, underlines the newspaper International mail. “In her work, she constantly explores the experience of a life marked by great disparities in terms of gender, language and class”underlined the academician Anders Olsson.

Born Annie Duchesne on September 1, 1940 in Lillebonne (Seine-Maritime), she grew up in Yvetot, in Normandy, and came from a modest social background. His parents, workers, became traders after buying the village café-grocery store. After studying literature at the University of Rouen and then Bordeaux, which led her to aggregation, she taught in the early 1970s in Annecy.

The novelist drew the material for her books from her own life, building stone by stone a literary work while testifying to her class of origin, the shame attached to it, her desire for extraction, and all the feelings that accompany social ascent, thus making a work of sociology. Through an essentially autobiographical work, Annie Ernaux draws the interior cartography of a woman as much as that, broader, of all women, and beyond that of French society since the post-war period.

“It is both the story of my life but also that of thousands of women who have also been in search of freedom and emancipation”.

She has also explored throughout her novels the question of the female condition, that of a woman born during the war and who became an adult in the 1960s, a whole life recorded in a work that is both intimate and universal. She recounted childhood, adolescence, youth in Empty Cabinets (1974), or in what they say or nothing (1977); she recounted her family, her parents and her social emancipation in The place (1983), or Shame (1997).

“I’m not an exhibitionist. I’m not self-centered even if I’ve been criticized for it. I think I’ve always talked about myself in distanced terms, as if I were the site of an experience that I was restoring. I’m talking about myself because it’s the subject I know best all the same… I’m interested in what there may have been social deposited in me as in everyone else”

in the newspaper Le Monde, in April 2017

The novelist recounted her marriage, her children, her work as a teacher in The Frozen Woman (nineteen eighty one) ; she recounted the abortion in The Event (2000), the death of his mother in A woman (1987), the passion in easy passion (1992), the family secret, the death of his sister before he was born in The other girl (2011); she also recounted the brutal entry into sexual life in girl memory (2016) and his city in Look at the lights my love, a diary of the moments she spent in her Auchan hypermarket. Annie Ernaux delivered a form of synthesis of all this in Yearspublished in 2008.

In his latest novel, The young man (Gallimard, 2022), Annie Ernaux returns in a short and dense text to the story she lived with a man thirty years her junior when she was in her fifties. An experience that reconnects her to her youth, and brings her back, again and again, to what is essential to her, writing.

“I am a woman who writes, that’s all”

The young man is a reflection on the passage of time, on maturity, which causes each new experience to echo those that preceded it, as in a large case of reasoning.

Annie Ernaux has also become a model for a young generation of writers, like Edouard Louis. “Annie Ernaux told about the working classes; I tell about the underclass. We continue on what the other started. She made other stories possible, she opened doors”he confided at the canadian newspaper The Pressat the time of the release of Fights and metamorphoses of a womanin May 2021.

Maria Pourchet, author of Fire (Gallimard, 2021), confided in The world in 2019 having learned from Annie Ernaux “the role of language in the education of girls”. “She also allowed me to evacuate the question of style, the concern to look pretty. She is the clerk of reality.”, she added. The Goncourt 2017, Nicolas Mathieu, or the historian and novelist Ivan Jablonka, do not hide their admiration for Annie Ernaux either.

The novelist was in the short list of finalists for the Man Booker International Prize in 2019 for Years (2008, Gallimard) published in 2018 in English, like most of his work, hitherto little translated into the language of Shakespeare.

If the work of Annie Ernaux has not been adapted to the cinema, two of her novels have recently been: easy passionby Danielle Arbid, released in August, based on her novel published in 1992 in which she recounted the passion of a forty-something woman for a married man, and The Eventby Audrey Diwan, Golden Lion at the Venice Film Festival, adapted from the novel published in 2000, in which she told the story of her abortion.

The life and work of Annie Ernaux are also at the heart of a documentary, I liked living thereby Régis Sauder, shot in Cergy-Pontoise (Val-d’Oise), Annie Ernaux’s place of residence.

In May 2022 at the Cannes Film Festival, Annie Ernaux presented the film The Super 8 Years, produced with his son David Ernaux-Briot. Like his literary work, this documentary is both very personal, autobiographical, and political, universal. Testimony in images of the life of a French family in the 1970s, it is above all an intimate and committed story, a look at the woman wishing to free herself from her only “nurturing assignment” and organization of domestic life, a woman “class defector”a woman especially, “drilled by the need to write”.

The Nobel Prize in Literature awarded to the French Annie Ernaux, author of an autobiographical, universal and political work