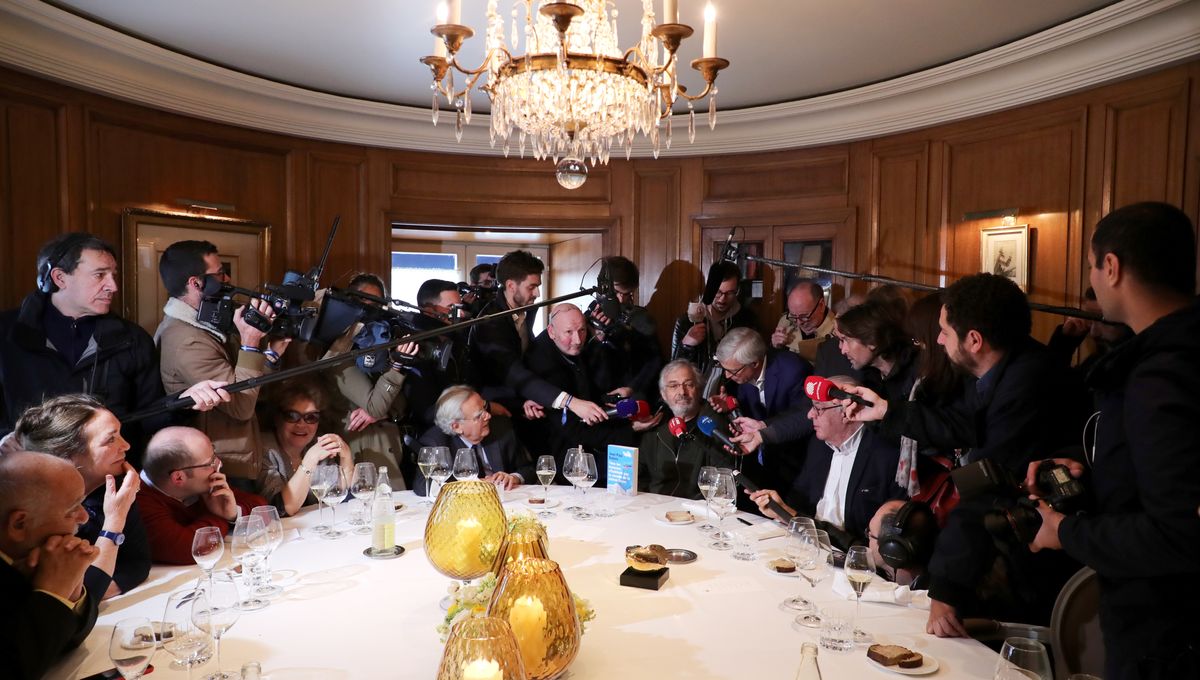 Launched in 1903, the prestigious literary award caused several outcry, and not just over its choices. The latest, revealed by France Inter Tuesday: suspicion of conflict of interest.

It is one of the most prestigious awards, the prize which brings authors into the courses of the greats of French-speaking literature. But the Académie Goucourt is also about scandals, decried choices, small businesses. This Tuesday, France Inter reveals the suspicions of a conflict of interest within it. One of the 16 writers selected is none other than the companion of one of the jurors, the novelist Camille Laurens, member of the Academy since February 2020. The philosopher François Noudelmann publishes his first novel “Les enfants de Cadillac”. The members of the jury knew this and ignored it.

Two surveys carried out by Le Monde and the New York Times last year pointed the finger at the inter-selves of the jurors. “For the four grand prizes mentioned [Goncourt, Femina, Renaudot, Médicis], or 38 jurors in total, there is only one non-white person. The Goncourt jury has only three women, ”notes the New York Times.

For its part, Le Monde notes that when Bernard Pivot arrived at Goncourt in 2004, he was “Amazed to discover that out of the ten jurors, there were two or three who read for the others” – these others inevitably voting according to criteria where literary quality hardly prevailed. The evening newspaper recalls that “Michel Tournier, long sworn Goncourt, had used the expression “Sentimental corruption” to designate decisions oriented by the bonds of the heart, friendship or love “. And tells us how Anne-Sophie Stefanini was able to benefit in 2017 from the affirmed support of a member of the jury – Patrick Besson – who then became the husband of the writer.

To avoid any suspicion, the Pulitzer in the United States and the Booker Prize in Great Britain prefer to renew their jury every year. Otherwise jurors can recuse themselves in the event of a potential conflict of interest, specifies the New York Times.

2013: La Barbe points out the lack of female laureates

Nathalie Sarraute, Françoise Sagan, Albertine Sarrazin, Violette Leduc, Marguerite Yourcenar, Amélie Nothomb have never been rewarded. Only ten women received the prize. In 2013, activists from the feminist collective “La Barbe” encrusted at Drouant and questioned the jurors a few minutes before the announcement of the winner.

1975: under a nickname, Romain Gary wins the Goncourt twice

The Goncourt Academy has set a rule, it is not possible to win the Goncourt twice. So how do you go about hijacking it? Romain Gary found the solution. Awarded in 1956 for The Roots of Heaven, he won the Goncourt Prize again in 1975 with The life ahead. He signs under a pseudonym, Emile Ajar. To fool everyone, Gary asks his little cousin Paul Pavlowitch to come to the press. He will hold his role for eight years. Romain Gary will reveal deception in his posthumous work Life and death of Emile Ajar in 1980, the last sentence of which is “I had a great time. Goodbye and thank you.”

1960: A laureate with an obscure past

In 1960, there was no celebration. God was born in exile wins the Goncourt Prize. Its author is Vintila Horia, a writer of Romanian origin. A few days after the announcement of the winner, L’Humanité attacks the writer, accusing him of having been part of the “Iron Guard” in the 1930s, an anti-Semitic and pro-Nazi movement. At the time of his death in 1992, The Written World : “Admirer of Maurras, translator into Romanian of Claudel, Gide and Jules Supervielle, he remains, alas, fascinated by the fascist and Nazi forces which were then emerging in Italy and Germany. At the time, he even wrote a few lamentable lines. to glorify them, without hesitating to attack the Jews in the process. “ The prize will be awarded, but not awarded.

Alain Ayache was only 16 when he managed to spy on the Goncourt jury during their very secret deliberations. We are in 1958. He tells the rest : “I went to Drouant to reconnoitre the place, and came face to face with the boss. He challenged me to spy on the deliberations without getting caught, promising me cover at Maxim’s if I ‘ The day before, I managed to stash a microphone in the chandelier, connected to a small wired tape recorder. But on the day said, everyone had their eyes on me. , and took advantage of the darkness to hide in a small closet. I was able to listen to and record the entire debates “. And to add:

I can tell you that it didn’t speak much about literature!

The one who became the boss of a large press group began again in 1983. The entire recording will be transcribed in his magazine “Le Meilleur”.

For some, this award is a dream, for others, a burden. In 1951, the rumor gives the winner The Shore of the Syrtes by Julien Gracq, well before the jury’s decision. Its author is clear: he will refuse the award. In a pamphlet of a few dozen pages, Literature to the stomach, Julien Gracq denounces the interest of literary prizes and the prejudices of criticism. Response from the Academy: “We choose the best and we don’t have to know what our preferred object thinks about it!” Then awards the prize to… Julien Gracq. When announcing the results, Raymond Queneau will play irony at Drouant: “The prize is awarded to “Ravage” by Sartre, by Julien Green! “ before recovering, mockingly: “Oh! Pardon: at the” Rivage des Syrtes “, by Julien Gracq.”

At that time, only a few scholars knew Marcel Proust. The 48-year-old writer publishes In the shade of young girls in bloom, this is the second part of In Search of Lost Time. But at the end of the war, awarding the Goncourt prize to this author and on this subject made no sense for public opinion. The press plebiscite The wooden crosses by journalist Roland Dorgelès, his masterpiece, an account of daily life in the trenches, a correspondence addressed to his mistress and his mother. “Make way for the old!” headlines a newspaper, which qualifies Proust “as a writer as hermetic as Mallarmé”.

The Prix Goncourt, 120 years of big and small scandals