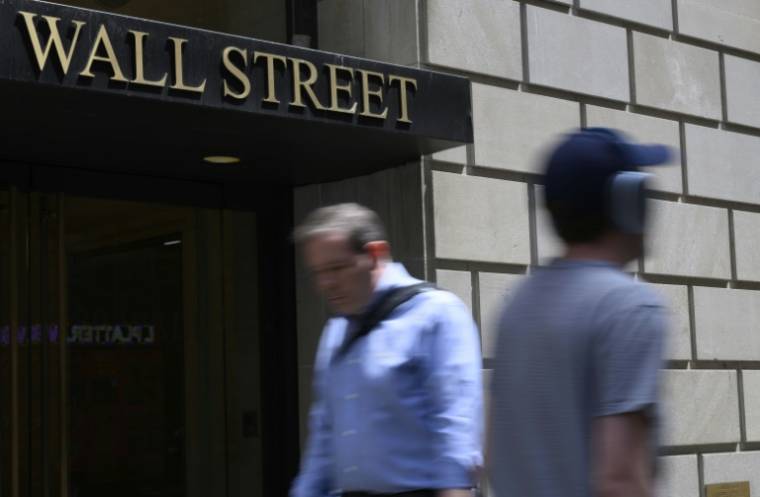 People walk on Wall Street near the New York Stock Exchange (NYSE) in New York on May 27, 2022. (AFP/Angela Weiss)

Galloping inflation in the United States in May caused the New York Stock Exchange to fall sharply on Friday, where the indices recorded their worst week since January.

Investors had a hard time digesting the really disappointing American indicators, first and foremost the CPI inflation index which, over the month of May, jumped 1% while analysts were betting on +0.7%.

Over twelve months, the rise in consumer prices rose to 8.6%, against 8.3% in April, far from the “plateau” hoped for by politicians and analysts.

This is the highest level of price increases since 1981.

Not only have stocks fallen, but the dollar has risen sharply and bond yields have risen.

Short-term and long-term bond yields on US government bonds were neck and neck.

“The CPI is much stronger than expected, the market was hoping for a plateau but it looks like price pressures are spreading,” said Scotiabank analyst Shaun Osborne.

“High inflation, a Fed that will raise rates more and an increased risk of a slowdown in the economy, that’s what’s happening,” summed up Karl Haeling of LBBW.

The US Central Bank’s Monetary Committee is meeting next week and markets are already expecting a 50 basis point tightening of key interest rates, after a similar hike last month.

But in view of the surge in prices, more and more analysts are wondering if the Central Bank will not tighten the screw more strongly by triggering a hike in key rates by 75 points, an extremely rare step in recent history. from the Fed.

“Markets are starting to price in the risk of a 75 basis point rate hike next week, but I’m not sure because that would seem like a bit of a panic,” Osborne said. .

While the American president reacted by hammering that it was necessary to do “more and quickly” to fight against inflation, Jerome Powell, the boss of the Fed, promises to be under great pressure when he will address the press on Wednesday after the meeting of the Monetary Committee (FOMC).

The concerns aroused by this tenacious rise in prices definitely weighed on consumer confidence, which collapsed in June. The University of Michigan’s household sentiment index hit an all-time low, falling 14% from May to 50.2 points, a decline that surprised analysts.

Travel sites and cruise lines drank the cup, in the wake of rising fuel prices, with Booking down 7.59%, Expedia down 5.60% and Royal Caribbean Cruise down 7.33% .

The digital document transmission start-up Docusign, which has suffered since the end of the confinements, again drastically shrunk on Friday by almost 25% after the announcement of poor results.

Tesla, which ended down 3.12% at 696.69 dollars, announced after the closing the division of its action by three. Amazon had divided its own by 20 on Monday.