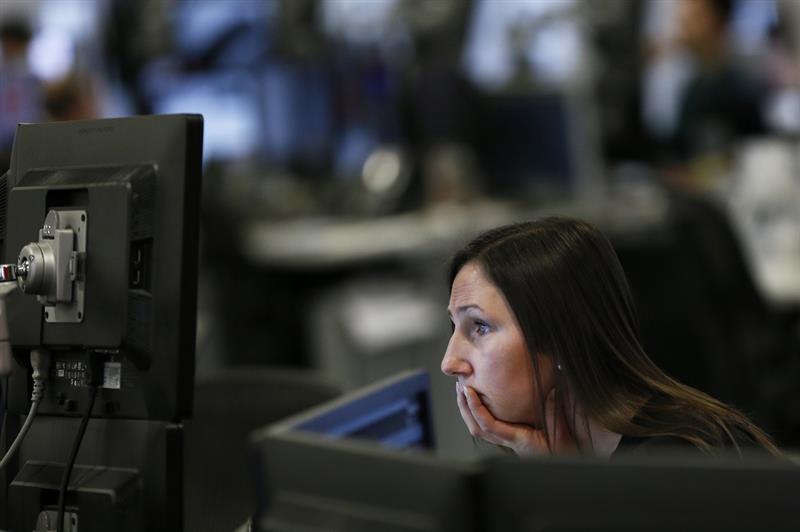 The Russian MOEX index has now plunged 34% to 2,000 pts and had even lost almost half of its value (-45%, historic drop) at the very start of the day below 1,700 pts, after the decision of Russian President Vladimir Putin to launch a military operation in Ukraine.

On the economic front, the latest American statistics take second place, far behind the Russian-Ukrainian crisis. The U.S. economy grew at a 7% pace for the fourth quarter of 2021, according to the second of its three estimates, released today by the U.S. government. The end of the year was in line with the market consensus, after growth of 2.3% for the third quarter. The previous fourth-quarter valuation was 6.9%. Personal consumption expenditure rose at a rate of 3.1%, against 3.2% consensus and 2% for the previous period. The price index linked to fourth quarter GDP rose at a rate of 7.1%, against 6.9% consensus.

Joe Biden has spoken with his G7 counterparts to decide on tougher sanctions against Russia. The US President plans to speak publicly on Ukraine later today. The virtual meeting between the United States and its allies is underway, and the G7 is preparing to fight back. “President Putin has chosen a premeditated war that will cause catastrophic human suffering and loss,” Biden said. Further consequences to be imposed by the United States, its allies and partners on Russia are expected later today. Washington also intends to coordinate with its NATO allies to ensure a strong and united response. The Alliance must also meet urgently tomorrow, after announcing a reinforcement of the presence of its troops on its flank and the alert of hundreds of planes and ships…

European Commission President Ursula von der Leyen has indicated that the EU will target strategic sectors of the Russian economy by blocking their access to essential technologies and markets, with a freeze on Russian assets in the EU and a blocking of access of Russian banks to European financial markets. The upcoming European Union sanctions package against Moscow will affect the Russian economy by increasing the cost of borrowing and inflation and will undermine the country’s industrial base… The new EU sanctions package is expected to be the most severe “ever implemented”, according to the EU’s high representative for external affairs, Josep Borrell. New support measures for Ukraine are also planned. Emmanuel Macron promised “a reaction without weakness”. The foreign ministers of the Baltic states (Estonia, Latvia and Lithuania) have called for blocking Russia’s access to the SWIFT interbank network and supplying arms to Ukraine.

Boris Johnson, British Prime Minister, judged that Putin had chosen “the path of destruction”. “Today, in consultation with our allies, we will agree on a massive set of sanctions,” Johnson threatened, saying the West must also end its dependence on Russian oil and gas.

Beijing, for its part, again called on all parties involved on Thursday to … show restraint. During a press briefing, a spokeswoman for the Chinese Ministry of Foreign Affairs refuted the term “invasion” used by foreign media to qualify the Russian intervention in Ukraine in recent hours.

Russia has thus launched a large-scale offensive in Ukraine by land, air and sea. Kiev confirmed that Russian columns had crossed the borders in the regions of Chernihiv, Kharkiv and Luhansk in the east of the country, and that landings of soldiers were taking place in the port cities of Odessa and Mariupol in the south. Explosions were even heard in the Ukrainian capital Kiev.

Ukrainian President Volodimir Zelensky has accused Putin of wanting to destroy his country. “Vladimir Putin has just launched a full-scale invasion of Ukraine. Peaceful towns across the country are under attack,” Ukrainian Foreign Minister Dmitro Kuleba tweeted. “This is a war of aggression. Ukraine will defend itself and achieve victory. The world can and must stop Putin,” Kuleba added. Ukraine has closed its airspace to civilian flights, citing a high security risk.

Putin, justifying his action in the separatist regions of eastern Ukraine, argued that Russia had no choice but to defend itself against what he called threats emanating from modern Ukraine. “Russia cannot feel safe, develop and exist with a constant threat emanating from the territory of modern Ukraine,” added the Russian president, who intends to demilitarize Ukraine. “Responsibility for any bloodshed will lie with the Ukrainian regime,” Putin said again, saying he does not plan to occupy Ukrainian territory…

eBay (-4%) is in sharp decline this Thursday on Wall Street, while the online auction giant announced last night quarterly results marked by a good performance in the cloud, but also mixed forecasts and a drop in the number of users. For its fourth fiscal quarter, the Californian group announced a net profit of $647 million or $1.05 per title, against $591 million a year earlier. Revenue improved 5% to $2.61 billion. The consensus was $1 EPS and $2.6 billion in revenue.

The guidance for the first quarter is somewhat disappointing, with the group expecting revenues ranging from 2.43 to 2.48 billion, compared to a FactSet consensus of 2.61 billion. EPS over the period is expected between $1.01 and $1.05, against $1.08 consensus. Additionally, eBay ended the fourth quarter with 147 million active buyers, down 9% from the same period last year. The gross value of merchandise sold on the site fell 10% to $20.73 billion.

Booking Holdings (-12%), the American online tour operator, corrects on Wall Street, on figures however materializing a significant recovery. For the fiscal fourth quarter, adjusted earnings per share were $15.83, versus $12.73 consensus. Over the comparable period, last year, the group had deplored an adjusted loss. Net profit was $618 million, compared with a loss of $165 million a year earlier. Quarterly revenue totaled $2.98 billion, beating consensus 3% from $1.24 billion a year earlier. The recovery is certainly strong, but the environment remains volatile and the basis for comparison is misleading, after the collapse of demand in 2020. In the fourth quarter of 2019, the group had generated EPS of $13.86 and generated revenues of 3.21 billion.

The group’s management is cautious, given the high infection rates in certain regions of the world and the geopolitical uncertainty likely to affect activities in Europe.

Moderna (+8%) is rebounding, as the American laboratory has just exceeded expectations for the quarter ended, generating 6.9 billion dollars in revenue with its anti-covid vaccine in the fourth quarter. For the quarter ended, the group posted a net profit of $4.8 billion and $11.29 per share, against a loss of $272 million a year earlier. The FactSet consensus was just $10 per stock. The group derives most of its activity from its Covid-19 vaccine. Total quarterly revenue was $7.2 billion. The vaccine generated sales of $17.7 billion last year. Over the financial year, Moderna thus generated a profit of 12.2 billion dollars, against a loss of 747 million in 2020.

Moderna expects increased sales of its vaccine for the second half, as the group anticipates that the virus will become endemic, requiring regular vaccinations. The laboratory forecasts sales of 19 billion dollars on the vaccine this year (with an additional 3 billion options), against 18.5 billion dollars previously anticipated (with 3.5 billion options). Discussions are ongoing regarding vaccine orders for the year 2023. Moderna adds that its vaccine will be favorably priced (“undervalued”) during the pandemic period, but that the pricing strategy will then evolve. The group is also working on a new bivalent booster (booster) combining an Omicron-specific booster and its initial Covid-19 vaccine.

Newmont Mining (+1%), the American gold group, should be among the day’s stock market survivors, due to “safe haven” purchases. However, the Colorado group has not published quarterly of excellent quality to date. Fourth-quarter adjusted profit fell 27%, with additional covid-related expenses and lower metal prices. Quarterly adjusted earnings per share were 78 cents, against 77 cents of market consensus.

Hertz Global (+4%) beat the consensus for the quarter ended. The group announced for the fourth quarter a loss of $260 million and $1.52 per share, against a deficit of $289 million or $1.85 per share a year earlier. Adjusted earnings per share were positive 91 cents, while revenue soared 78% to $1.95 billion. The group evokes a disciplined management of the fleet, as well as a continuous resumption of voyages. Quarterly adjusted profit even reached a record, but post-bankruptcy restructuring costs pushed consolidated net income into the red.

Alibaba (-4%), the Chinese colossus of online commerce, announced poor quarterly results. The group’s profits beat the consensus, but revenues came in disappointing, posting their weakest growth in eight years since the IPO in 2014. The Wall Street-listed Chinese group reported adjusted earnings per share of 2 $.65 and revenues of $38.06 billion, while the consensus was $2.55 EPS for $38.9 billion in billings.

Wall Street phlegmatic, after the Russian offensive in Ukraine