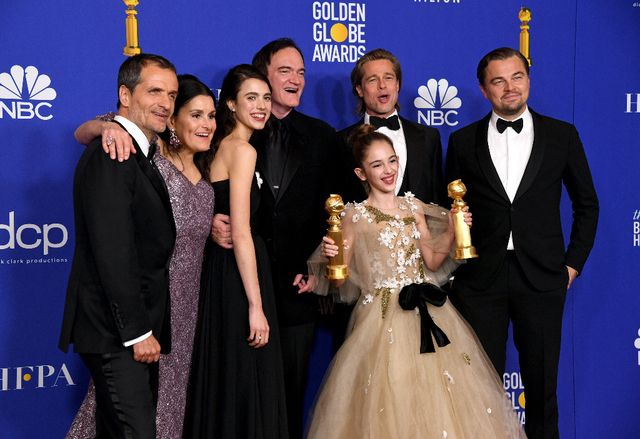 77th Golden Globes: success for Tarantino and panties for Netflix

This ceremony without controversy has, in the end, kept its promises by pleasing everyone

This year, the Oscars are brought forward and will take place the first weekend of February. A change without impact on the Golden Globes, which took place for the 77th time on the night of Sunday to Monday. Once less publicized, the 2020 ceremony seemed to announce the victory of Netflix, which already saw itself making headlines with a historic year. But the arrogance was stopped short. Out of 34 nominations – a record with which the streaming platform will be satisfied – Netflix only leaves with a single Globe awarded to Laura Dern, best supporting actress in “Marriage Story” by Noah Baumbach, an overrated comedy about divorce which accumulated nominations in six categories. A hell of a crack, in the end, even if Adam Driver would have deserved a mention.

On arrival, the prize list of these Golden Globes is rather colorful and this is one of the reasons to rejoice. On the cinema side, dramas are distinguished from comedies or musical films. Against all odds, it was the last Sam Mendes, “1917” (which is released on January 15), a war film shot in a single sequence shot, which beat the post of these favorites such as “Joker” or “The Irishman” in the drama category. The latest Tarantino, “Once Upon a Time in Hollywood” won the Globe equivalent of best comedy or musical film, which it is certainly not, but we are not going to quibble. Deserved, the Globe for best actor for a drama goes to Joaquin Phoenix for “Joker”. Taron Egerton, excellent in “Rocketman”, biopic on Elton John, wins the equivalent for a musical film. On the actress side, Renee Zellweger for “Judy” and Awkwafina for “The Farewell”, share the rest of the Globes. But the big winner of this evening remains Tarantino, since his film gleaned two other statuettes, one for Brad Pitt, best actor in a supporting role, and the other for his screenplay. Hardly surprising, the Golden Globe for best foreign film went to the Cannes Palme d’Or, this “Parasite” by Bong Joon-ho which never ceases to seduce.

This general mix is ​​not surprising. In recent years, it is rare that a film crushes all the others. Which no one is going to complain about. The Golden Globes also includes a television component where the series are rewarded. “Chernobyl”, via comedian Stellan Skarsgaard, finds herself distinguished, just like Patricia Arquette, Olivia Colman, Ramy Youssef, Michelle Williams or Russell Crowe. A taste of the Oscars, a ceremony without controversy – no mention of #metoo, nor of the scandals tainting Hollywood at the moment – ​​this parade of outfits formatted for the red carpet has thus kept its promises by pleasing everyone. To the following!

You found an error?Please let us know.

This article was automatically imported from our old content management system to our new website. It may have some formatting errors. Please report any errors to community-feedback@tamedia.ch. We thank you for your understanding and cooperation.

77th Golden Globes: success for Tarantino and panties for Netflix