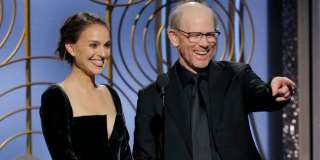 GOLDEN GLOBES – Since we are creating gender categories for actors and actresses why not specify when other awards are male only or female only. This is what must have been said Natalie Portman when submitting a Golden Globeon the night of January 7 to 8.

So, while director Ron Howard, who jointly presented a statuette with the actress, began by explaining that they were going to give the award for “best director”, Natalie Portman cut it off and clarified: “Here is the all-male list of nominees for the Best Director award”. An important detail, which made the audience smile and pleased.

His initiative has also been welcomed by many personalities, such as anonymous people on social networks. Zoe Saldana, seen in particular in “Avatar” and “Guardians of the Galaxy”, for example, welcomed the initiative of her colleague.

“And that’s when my homie Natalie Portman came up with the MEN nominated for the Best Director award. Amen!”

“To all the guys on Twitter who squeal because Natalie Portman clarified ‘male appointees’: Calling the lack of diversity by name is not an insult to appointees. It’s an insult to the system that is routinely sexist to the point that no women were named.”

“I must say it took guts to dare to add ‘men’ when listing the nominees. Have you seen all those shocked looks? That’s the face of change.”

A review taken up by Barbra Streisand. As she presented the best film category this Sunday evening, the singer couldn’t believe she was the only winner of the “best director” award for the film “Yentl” in 1984. “It was he 34 years ago! We need more female directors and nominate more women for this award. Time’s Up (“it’s time” and name of the anti-harassment fund launched by hundreds of actresses)!”

Before presenting the award for best director, Natalie Portman made a major clarification