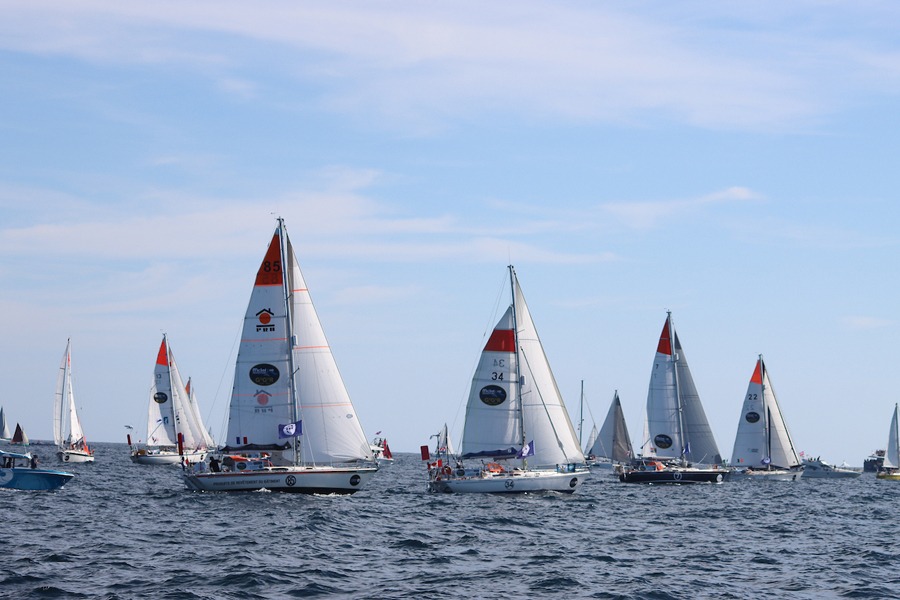 Emotions ran high as family and friends bid farewell to the 16 skippers setting off from Les Sables d’Olonne for one of the toughest challenges around the planet. The Golden Globe Race is a non-stop solo race on vintage 10-11 meter sailboats with no technology and no assistance. After years of intense preparation and security checks, the thought of 9 months of total isolation with only HF radios to talk to his family was overwhelming.

The Sablais, as usual, came out to greet the competitors of the GGR during the two weeks of the race village which welcomed 5000 visitors a day. Thousands of people along the mythical channel of Les Sables d’Olonne greeted the classic and historic yachts, the competitors of the Golden Globe Race, the traditional Olonnois and the yachtsmen who marched towards the starting line. 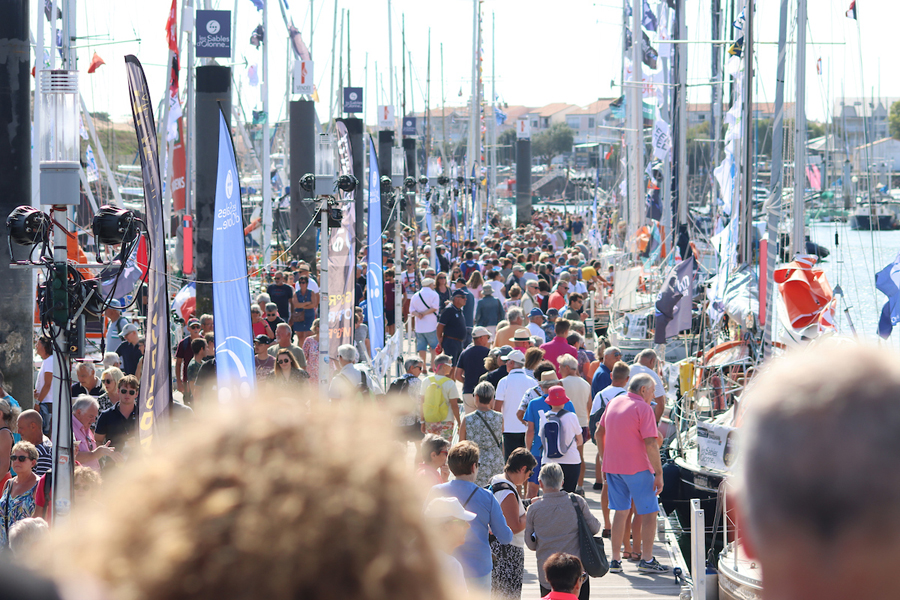 Lots of visitors to Les Sables d’Olonne for the start of the 2022 Golden Globe Race. Photo credit: GGR.

“For the past two weeks, in Les Sables d’Olonne, the Golden Globe Race Village has been a big popular party. Today, there were thousands of us gathered on the quays to encourage the skippers and communicate to them the strength of the Sands and Vendée spirit. What an emotion to see these adventurers go up our mythical channel; a new chapter in the history of ocean racing has opened in Les Sables d’Olonne. – Yannick Moreau, Mayor of Les Sables d’Olonne.

“You can’t dream of a better base for the GGR than Les Sables d’Olonne. Seeing the sailors departing from the marina was a mixture of excitement, humility and electricity. We were all caught up in a whirlwind of emotions. It was difficult to imagine the joys and sorrows these sailors and dreamers will experience in the months to come,” said Don McIntyre, President and Founder of the race.

The skippers were ready after years of preparation, it was time to go! The wet start line between the Swan 55 Galiana and the Esprit d’Équipe of Sablais skipper Lionel Régnier, participants in the Ocean Globe Race. On the Guépard building, a training ship for the French Navy sponsored by the town of Les Sables d’Olonne, the start was given by Sir Robin Knox-Johnston, accompanied by Mayor Yannick Moreau and the founder of the GGR Don McIntyre, 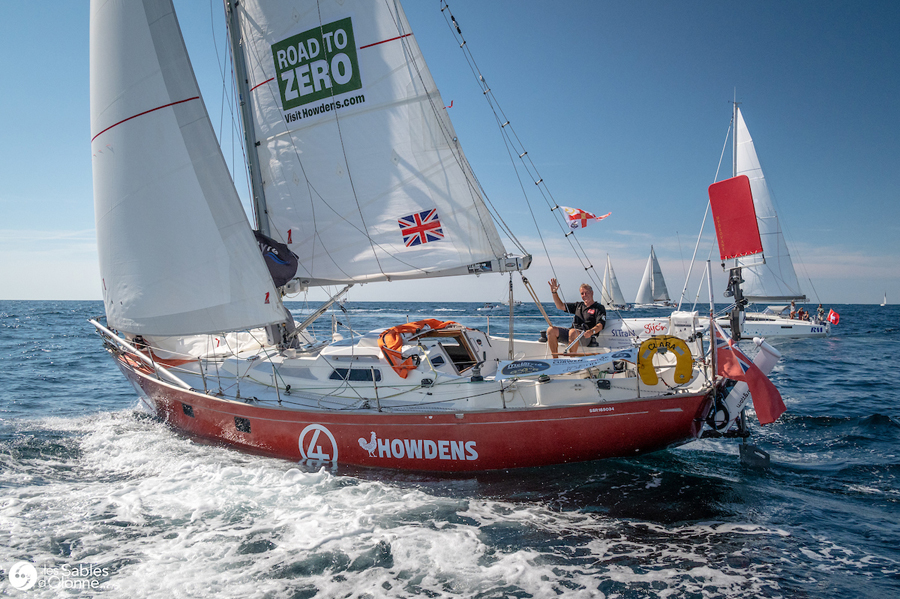 It was the Briton Simon Curwen who crossed the line in first position, followed shortly after by the Frenchman Damien Guillou on PRB, joined by Kirsten Neuschäfer. The trio that had led the Prologue from Gijón quickly took the lead of the fleet towards Cape Finisterre, 350 miles south-west of Les Sables d’Olonne, which they should pass in 3 to 4 days.

The former minister, the former Figaro sailor and the long-distance sailor who had all dominated the Gijón Prologue in mid-August will be keen to set a steady pace for the rest of the fleet in the first hours of the race to implement their respective strategies which should lead them to look for the depression to the west before descending to the Cape Finisterre DST. Strong headwinds, avoidance of coastal traffic and possible interactions with killer whales along the Galician coasts are some of the challenges ahead.

Popular local sailor Arnaud Gaist crossed the line a minute too early and nearly crossed the line as requested by the committee. There will be implications later but which should not change the face of the race for the smallest sailboat in the race.

Christian Dumard, the meteorologist of legendary races such as the Vendée Globe, the Volvo Ocean Race or the Mini Transat, shares his analysis:

“The conditions for the first days of racing are going to be tough. After a start in good conditions, the depression located to the west of the Celtic Sea will bring sustained winds from the South-West. It will be followed at the end of next week by the remnants of Cyclone Danielle which formed in the middle of the Atlantic. It is therefore in a dominant South-West to West flow that the competitors will be sailing as far as Cape Finisterre, then probably as far as the latitude of Lisbon. The sea will be formed with waves that can reach 4 meters. They can then hope to touch the Portuguese trade winds, those famous northerly winds that will allow them to sail downwind towards the Canary Islands and the Cape Verde Archipelago. »

Two options therefore emerge immediately: to the West in the front and heavy weather for skippers who wish to set a strong pace for the rest of the fleet in the first 24 hours, and a route favoring milder weather but more uncertain along the coasts of Asturias and Galicia. This choice, early in the race, could well lead to the first division of the fleet into 2 groups.

The Spaniard Aleix Selles, still waiting for his mast, chose to accompany the fleet while carrying out his jury rig test on his Rustler 36 Onsoro. According to the notice of race, he still has one week to cross the starting line south of Nouch, and benefit from good weather conditions. He is determined and could well add an extra twist to this 2022 edition.