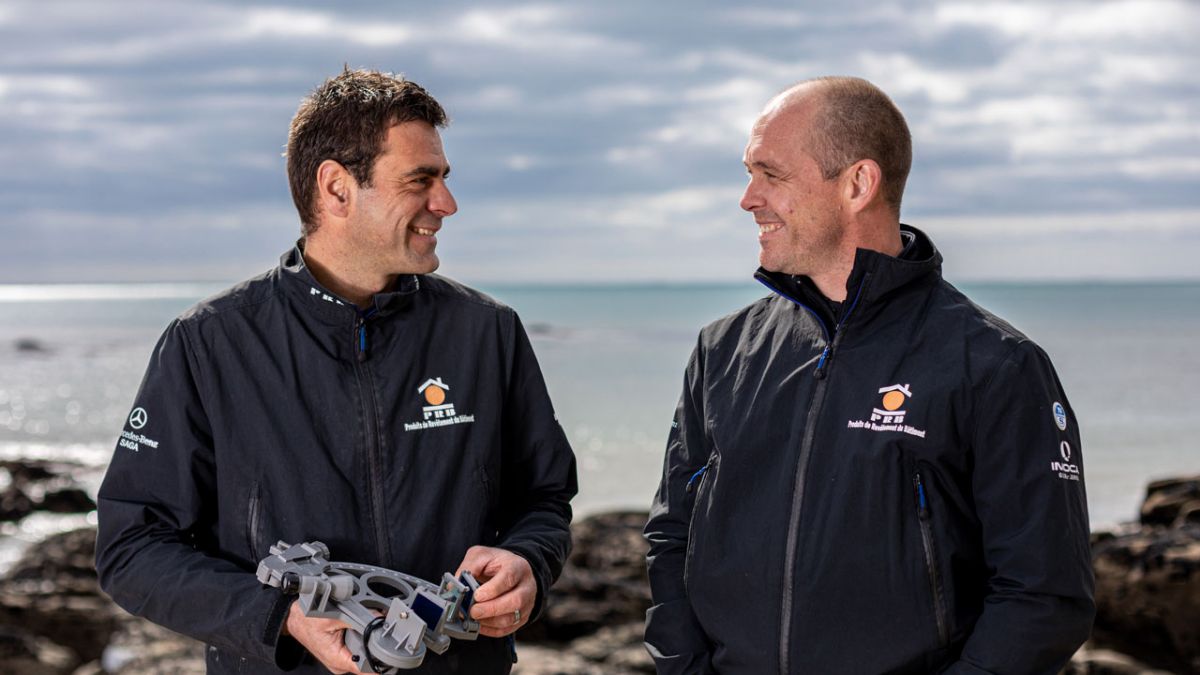 Damien Guillou will leave under the colors of PRB for a nonstop round the world tour, without assistance and without modern means of communication on the 2nd edition of the Golden Globe Race.

Faced with competitors who, like him, take up this crazy bet, Damien will make his way with the sextant! The sailor, trained in Olympic sailing (optimist, laser, 49er) and Figaro knows everything about modern monohulls. He would even know how to draw with his eyes closed the 60 ‘PRB with which Kevin Escoffier entered the last Vendée Globe. He was the one who, as PRB’s boat captain, took care of this carbon boat until the last minutes before kick-off. But today he has chosen to set off on a boat of only 11 meters and deprived of any electronic tool … Minimalist comfort, paper maps and sextant will be his companions for this competition which defies all the codes of modern navigation (no computers, no satellite navigation aid, no automatic pilot, etc.). Damien creates a surprise because he is not necessarily the one we imagined embarking on such an epic. But it is as a true lover of the sea and passionate about competition, that he will cover these 30,000 miles through the three capes. Particularly proud to lead this adventure with PRB, Damien continues the history of the Vendée company with tours of the world.

It was during the Vendée Globe village, last October, that the project began to germinate. Then a member of the IMOCA PRB technical team, Damien Guillou talks with Jean-Jacques Laurent, President of the Vendée SME on the mythical pontoon of Sables d’Olonne. The latter lets Damien know that he wants to realign a PRB boat on the Golden Globe Race and that he is looking for a skipper. Concentrated on the preparation of the 60 feet, the Breton hears but does not project himself immediately. “When Jean-Jacques Laurent told me that, we were in the home stretch to prepare for IMOCA so I didn’t really react, even though this proposal obviously appealed to me. Following this discussion, I took the time to find out about the dates of the race and the idea gradually gained momentum. I was at this stage still in personal reflection. Afterwards I took the step to talk about it to my wife and I also discussed it with Paul Meilhat and Anthony Marchand, two childhood friends who know me well. It was only after having had their points of view that I returned to Jean-Jacques Laurent to inform him that I really wanted to embark on this project, he then replied Go! “

“I find myself fully in this ordeal! “

Damien Guillou will therefore tackle a completely new challenge next year with passion and desire. “All the criteria are met for this Golden Globe Race! The racing aspect, my love of boats and the sea, my taste for technical preparation and adventure! Even if it may seem surprising, I find myself fully in this ordeal! I had carefully followed the 2018 edition, telling myself that it was both interesting and daring, but without imagining that I would one day take the start of this race. And doing it under the PRB colors really means something to me, I’m very proud of it! The story continues in a different way in a way and I’m very happy to have Kevin’s support in this project as well. His seamanship and his advice are very precious! ”Supported in his approach by Kevin Escoffier, Damien benefits from all the energy of the“ PRB family ”. Vincent Riou, former winner of the Vendée Globe under the PRB colors in 2004, will welcome Damien’s boat in its structure to prepare it. The Rustler 36 bought last month in Italy will reach Port-La-Forêt at the end of April.

A total refit project
The monohull which perfectly meets the strict criteria of the Golden Globe Race was built on plans drawn before 1988 (1980). The sailboat will be under construction for around two months, as Damien indicates: “We are still awaiting the Italian authorizations for the exceptional transport which will be done by road. The health context complicates things a bit, but this should unblock soon. As soon as we have received the boat, it will go into the yard for a total refit. For the moment, it is in cruise configuration. The objective will be to put it in race mode and that requires significant changes. We are planning a relaunch at the end of June so that I will sail all summer to take it in hand and go into qualifying for 2000 miles at the beginning of September. “

Step one: learn to use a sextant
In the meantime Damien Guillou has started learning the sextant… An essential first step for this Golden Globe Race. “I went for two days for training in Toulouse with a person passionate about sextant who has made it his job. This allowed me to acquire the basics and since then I have been doing arithmetic exercises almost every day. When it’s sunny, I also go to the edge of the coast to do some surveys. The sextant can be frightening at first, but that’s not overwhelming! In no time, I managed to get by! I can’t wait to put it all into practice on the boat this summer! »Says Damien already fully launched in his project.

For Jean-Jacques Laurent, it is the continuity of a beautiful meeting. ” I really wanted to return to this race. We took part in the first edition with Philippe Péché. And we discovered a universe totally different from the Vendée Globe. In the Vendée Globe, we are in a technological dimension and things have to go quickly. It is exciting. We have seen the enthusiasm generated by the edition which has just ended. On the Golden Globe Race, we maintain a relationship with the long term! It’s a whole different challenge, but it’s just as fascinating. It’s fantastic that Damien is wearing our colors. He was already in the PRB family. He’s a great sailor. He is very enthusiastic and has a very serious approach. I think it is very respectful to be part of the history of PRB with the tours of the world. He has our full confidence and also Kevin’s support, which is obviously important to us. It’s a very good story that begins in view of this extremely difficult race. “

Golden Globe Race. Damien Guillou under the colors of PRB