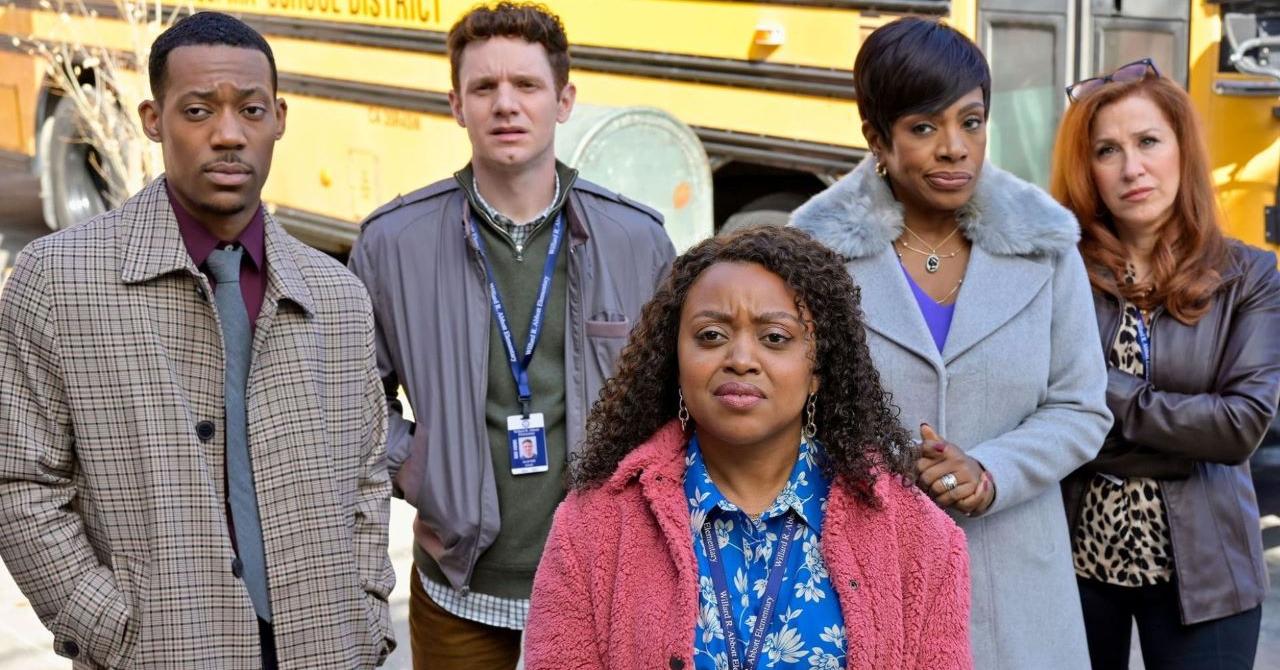 Broadcast in France on Disney+, Abbott Elementary has just been renewed for a third season. Spotlight on Quinta Brunson’s feelgood series.

A fine consecration for Abbott Elementary. In addition to the Best Comedy award, the sitcom also picked up the Golden Globes for Best Comedy Actress for Quinta Brunson and Best Supporting Actor for Tyler James Williams. And this is not the first award for the ABC show: in September 2022, the series had already won three Emmy Awards.

The Golden Globes confirm the enthusiasm generated by the series, which takes the opportunity to officially return for a third season. The news was announced by Craig Erwich, president of ABC Entertainment, during a recent press conference. In an exclusive interview with Variety after the Golden Globes, he said: The series is in its second year, and I think it continues to develop well creatively. In season 2, each of the characters becomes more dynamic and the situations are more and more funny. So this series still has years ahead of it. I am constantly delighted and surprised by what Quinta and his team have in mind. »

The Office at school

Created by Quinta Brunson – who also holds the main role of the series – Abbott Elementary is set in a public school in Philadelphia and follows the daily lives of a group of dedicated teachers who try to keep the school afloat despite underfunding and mismanagement (with varying levels of experience and background, of course). ‘optimism). Despite the love for style series The Office, Abbott Elementary seems very little known in France, a little lost in the middle of an abundant streaming offer and in particular on its Disney + platform. Why is this series so popular with American critics?

This sitcom shot in the form of a fictional documentary (a mockumentary like The Office Where Parks and Recreation) provides insight into the school system by offering quite comedic scenes on various professional dilemmas: standing up – in a nail salon – to a mother whose son is constantly late, stealing carpets so that students can take their naps on them , or even improvise as a concierge to solve electricity problems. And in the midst of it all, Brunson, who plays Janine Teagues, an enthusiastic but naive teacher, tries to guide her students towards a brighter future.

Since Brooklyn 99 and even Superstore, no quality sitcom set in a workplace (it’s a genre in itself) had managed to make a name for itself. The latest, Blockbuster – which featured Randall Park and Melissa Fumero as employees of a video store – had not convinced (laughs were rare). And the series has just been canceled by Netflix. So it is indeed Abbott Elementary which is positioned as the sitcom of the moment. From the first viewing, we quickly understand the enthusiasm around the series. His charm ? A dynamic reportage-style camera that captures the most awkward moments well, hilarious camera glares with impeccable timing, and that recurring gag of mommy issues between Janine and Barbara (a character incidentally inspired by Quinta Brunson’s own mother).

A cast at the top for a series feel good

The casting (mainly made up of black actors, since we are in a black neighborhood of Philly) ignoring the very question of inclusiveness, remains the finesse of writing, which does justice to the plurality of characters: Ava, the incompetent director ; Janine who tries to solve all the problems of the school; Barbara as a respected teacher; Jacob, the white man a bit too much woke ; a (very) relaxed Melissa; and finally Gregory, the new replacement who is quickly disillusioned with the school where he landed. The latter is played by Tyler James Williams (photo above), winner of the Golden Globe, and rightly so: Facing Janine, the good student constantly seeking approval, Gregory is an ultra-stilted nerd, always dismayed by the world of school and its daily compromises.

Above all, what is a hit in Abbottit’s the feeling feel good which irrigates every minute of each episode (the 13 of the first season make 22 each – easy to binge, right?). As if it wanted, like an ideal school, to be a refuge and a fortress, a place that protects and inspires. It should come as no surprise to learn that the school in the series got its name after a kindergarten teacher from Philadelphia, Joyce Abbott, one of whose little pupils was named Quinta Brunson.

The second season ofAbbott Elementary, currently airing on ABC, will be streaming in its entirety on Disney+ later this year. You know what you have to do before the bell rings for season 3 and the good students have already caught up with everything.

They will do everything to ensure that their students succeed. 🎓 Check out Season 1 of Abbott Elementary, streaming now at #DisneyPlus. pic.twitter.com/Lfd8fQcmH5

What is Abbott Elementary, this series that triumphed at the Golden Globes?