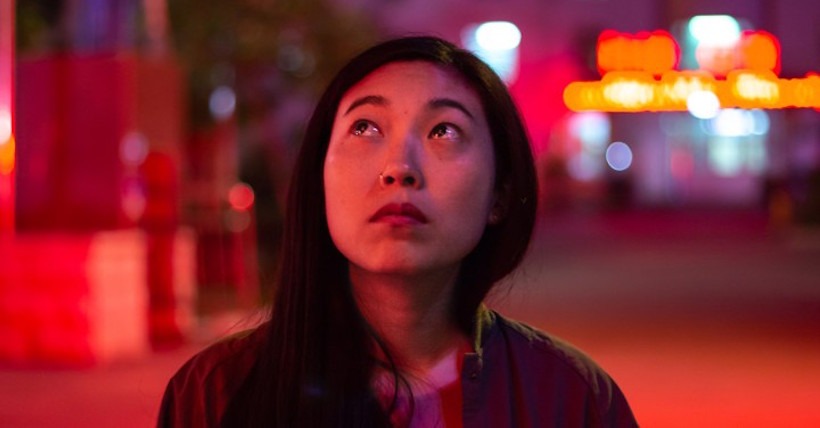 Straight out of rap, the New Yorker of Chinese origin is making her mark in cinema, oscillating between blockbusters and indie films. Noted for its eccentricity in Crazy Rich Asians, she just won a Golden Globe for her first role in The Farewell – she is the first actress of Asian origin to win the title – and is poised to become a major Hollywood figure.

From the height of his 1.55 meter, Awkwafina is visibly on all fronts. Rapper, host, actress, YouTuber, DJ, activist at Time’s Up, author… The New Yorker makes her deep, slightly hoarse voice heard while building her empire. Real name Nora Lum, the only child grew up in Forest Hills in Queens, New York. When she was only 4 years old, her mother of South Korean origin passed away and her Chinese-American father was visibly absent and broken after this tragedy.

“Being an only child is the equivalent of being those crazy people who live alone. They say they walk naked all the time. They are in their thoughts. That’s what a child alone is. You are just a crazy person with yourself, ”she said about it.

Raised by her grandmother, closer to a “BFF” geek than a cake granny, she was sent on her mother’s last wishes to school in Queens, PS 196 Grand Central Parkway, where she finds great diversity :

“I grew up in a classroom where I didn’t understand xenophobia, because… It’s the weird thing when you grow up in New York: people don’t see how downright diverse it is. I mean… Queens is clearly the most diverse of neighborhoods in terms of languages ​​spoken and regionalism, there is no buffer zone. It’s not like a small China Town, it’s a ‘Korea Town’ . Everyone is mixed up. “

At just 18, the New Yorker will set foot on Chinese soil for the first time, when she goes to study for three years at the Beijing Language and Culture University, specialty women studies, in Beijing. She will add a journalism degree to her resume after returning to the family home in New York City, where she will remain until she is 25.

At the same time, Nora Lum makes the Awkwafina that lies dormant within her grow. At the age of 15, she chose this blase which will never leave her and the trumpet as a totem instrument. In her bedroom, she begins to compose on GarageBand and tout begins in 2016 with her track “My Vag”, extolling the powers of her vagina on a provocation similar to that of Californian Mickey Avalon and his “My Dick”. Not a feminist message, then. She was also lynched on the virtual square by feminists outraged by the rapper’s words:

Still alongside director Court Dunn, the artist will release “NYC Bitches” and “Peggy Bundy”, featured on his first album Yellow Ranger, followed four years later by the self-esteem In Fina We Trust. If her greatest influences lean towards Notorious BIG and Mos Def in music, she devotes a cult to Charles Bukowski on the literature side.

It is also easier for her “to write jokes than to make music “, as she confided in an interview with Vogue. Humor, for her, works as a defense mechanism:

“I developed humor as a defense mechanism when I was 4, when my mother passed away. I wanted to be an emblem of joy, not sadness. Today, to be a woman in comedies. is like building a spirit of camaraderie with the truths, therefore sad and funny realities, that define us as women. It is also using your power, courage and humor to enhance feminism by general.”

Cinema is never far away either. At 16, she worked in a video store, where she watched in a loop Throughout life by Garry Marshall. Today, it is precisely her actress cap that has allowed her to be in the spotlight. Just named Best Actress at the Golden Globes for The farewell, Awkwafina has at its counter Girl Code, his first film in 2014, and a host of comedies / blockbusters: Our worst neighbors 2, Ocean’s 8 and especially Crazy Rich Asians.

Known for its 100% Asian cast – something that hadn’t happened in Hollywood for 26 years and The Lucky Club in 1993 -, this refreshing rom-comedy allows her to explode in the role of an eccentric fashion fanatic. Short hair, she forms a perfect duo with Oliver T’sien, the fashion designer who deserves a spin-off:

“When we started filming ‘Crazy Rich Asians’ we knew it was something very special. But we didn’t imagine how far it would go until we came back and went to the screenings where young people would come out crying because of this representational power. You can’t realize how important this is until you realize that you haven’t had access to this since you were born. “

At the start of the year, she is on the bill for The Farewell, his first drama. Director Lulu Wang imagines a measured family tragedy, half-comedy, half-heartbreaking, built on an unthinkable lie: cancer has just been diagnosed in Nai Nai, grandmother and mother adored by all her family, including Billi ( Awkwafina) is one.

Preferring to hide the truth from the old lady so that she can live her last days without worry, the family pretends an obscure marriage to gather in China at Nai Nai and share her last moments of joy. Billi, who grew up in the United States, struggles to take the news and struggles to keep it a secret.

Dedicated and sometimes overwhelmed by these heavy secrecy, apparently common in Chinese culture, Billi takes advantage of this trip to discover her buried origins. While in the United States the culture of selfishness reigns supreme, China rather favors family and community. These different cultures are thus illustrated in this marvelous film hatched by A24.

For this role inspired by the director’s story and written to measure for Awkwafina, the actress was constantly thinking of her grandmother, her model :

“My grandmother is everything to me. She taught me that Asian women are strong, they are not submissive creatures. She always knew I had something, not just the power to be a star, but the guts to become it. She gave me singing lessons and we didn’t tell my dad because he would have said, ‘Why are you spending your money on this, that’s stupid.’ “

Yesterday, however, she opened a new chapter in Hollywood by becoming the first Asian woman to win a Golden Globe for Best Actress in a Musical or Comedy. At the end of her speech, she did not fail to send a message to her father: “See, I ended up getting a job.”

Who is Awkwafina, talented rapper-actress who just won a Golden Globe