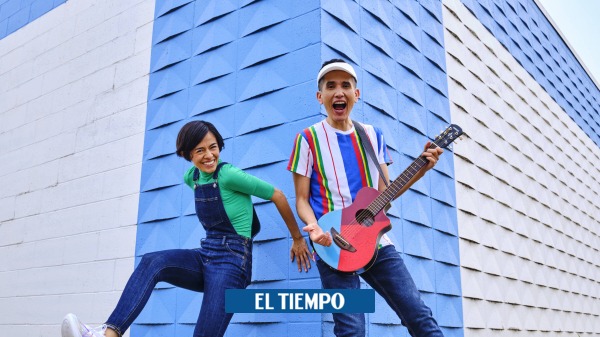 The audience is not easy, the boys and girls are very sincere, if the show bores them or they don’t like it, they don’t hesitate to lie down on the floor to sleep, cry or do anything else. However, Andrés Salguero, a musician from Bogotá, and Christina Sanabria, an American teacher of Colombian parents, manage to captivate not only the boys and girls, but also their parents with 123 Andrés.

The duet won the 2016 Latin Grammy Award and are now nominated for the 2022 Anglo Grammy in the category of best children’s music album for their latest album, Actívate, in which great Latin music artists such as Rubén Blades, Gilberto participated. Santa Rosa, Pipe Peláez, among others.

EL TIEMPO spoke with Christina and Andrés, who are based in the United States.

How long have you lived in the United States …

Andrew: Well, Christina is the daughter of immigrants, her parents came from Bogotá, her father was undocumented all his life, her mother was also undocumented until recently. She grew up here immersed in the Colombian culture of her home, but also very close to other nationalities.

Christina: In my days, in the region where I lived, these schools that Andrés comments did not exist, it gives us great pleasure to see that there is more and more interest on the part of Latino families like those that are not, in having content in Spanish. Well, and our content is not only about colors, but about other things, about movement, about gender, about culture. For example, on the album Activate there is a song called El gran merengue. He says: “He was born in Africa, grew up in Quisqueya and even Manhattan came to stop.”

How did they meet?

Andrew: I, from Bogotá, studied music at the Javeriana University; I first studied at the National Conversatory of the National University. And I came to the United States to continue my postgraduate degree, which was initially in classical music, clarinet, that was my focus. I did a master’s and a doctorate. All very focused to teach in universities. When I was finishing my PhD, I began to see this world of children’s music and it was precisely at that moment that we met Christina at a family reunion and there it was a magical change. About 10 years ago the project is firm. I finished my doctorate and everything, so I am Dr. Salguero (laughs). But in reality all that knowledge is but applied in our work with our children. It was a personal struggle, an internal struggle … and the truth is that it gives me much more pleasure to talk about cumbia, salsa, merengue, than to talk about Beethoven, Mozart … Then I found my superpower, my called, I found out this is what I should be doing. And Christina too …

Christina: I did theater when I was a child. And now, 20 years later, that training I came to use now, I studied pedagogy … We came together and it was a tremendous alignment of stars that we found each other.

Christina: Yes, of course, in our music in general there are like two goals. Number one, as we said, there are children who have roots from all over Latin America and each one hears those rhythms at home, and we want all children to listen to those rhythms. I, for example, grew up with cumbia in my house, but other children from other traditions will have grown up with other traditions. So, how nice that in the United States we Latinos can connect with each other through music. And on the other hand, we recognize that children are also listening to adult music and want to hear music as it sounds on the radio. That’s why we are here, to offer you something with clean lyrics, that teaches you something, that invites you to dream, to learn, but with beautiful rhythms.

(You may be interested: Draco Rosa talks about how music has healed him)

Andrew: It was a work very close to the producers of the album who had worked with several of them. So I think it was the perfect combination of taking them a project that also moved their hearts because this is a project that wants to help. But we also introduced them to songs that spoke to them on a musical level. For example, for Gilberto Santa Rosa we wrote a specific song. We know you like baseball and we wrote a positive and inspiring song around baseball. For Felipe Peláez, for example, we made a song thinking about him. We sat down to listen to all of Felipe’s albums, and knowing that he is now a family man, and we came up with this song thinking about him. And it turned out to be a very tender song, from a father who watches his little girl grow up and who realizes that she is going to be very big very soon.

When you say helping, what do you mean?

Christina: The funds generated by the disk will help two foundations. One of them is Cakike, who is working in Cartagena and Bogotá, in areas with socially vulnerable communities. They are boys, girls and young people who could not have music classes, and who give them free music classes. So we established a scholarship called the Activate Scholarship, and through this scholarship one of the young people will receive their own instrument and their classes will be paid for a year. And the other foundation is called The soul has no disability, it is working in Venezuela with girls and boys who have special needs and the most beautiful thing about that alliance is that some of those boys and girls are part of a choir and their voices can be heard. in Activate.

How do you guys work when writing your music?

Andrew: For me as a composer and writer the process is the same. Sometimes it helps us a lot to have a goal. What is the specific message that we want to carry? On this album you can hear that each song had a specific theme. We are looking for a positive value that we can include in the story. We always keep in mind that it is a story that generates empathy, but that is tied to something else.

Christina: I would add that many of the adult songs are about love or being in love or spite and heartbreak. So, for us, children’s music opens many doors for us because in this album we have a song about, for example, food, healthy eating, riding a bicycle with the family, going to the beach. It opens up many possibilities for us in terms of the theme and being creative. The other idea is that we do not all the songs in concert, but we think about how we can channel energy to invite children to move. For example, the beach song is funny because it is a story about you going to the beach and the sand is very hot, so we wonder how we dance when the sand is hot and the wind is strong. As well as for the grown-ups there are rumba songs, party songs … we also have rumba songs for boys and girls.

Andrew: When we received the Latin Grammy in 2016 and we had the opportunity to stand in front of all these artists, and you have a minute to say something. I said: When they ask me why I make children’s music, I answer that because it is the most important music there is, because these little people who are complete human beings absorb the lyrics and make them part of their minds and hearts. And just as parents go and look in the supermarket for a food that does not have chemicals, that is something that is not going to hurt, in the same way what we are giving them in terms of art. Books, music, movies are food that we give them to create their idea of ​​the world. That is tremendous responsibility.

Since you mentioned it, tremendous to win Latin Grammy … and now they are nominated for the Anglo.

Andrew: It was incredible. In 2015 we had been nominated, we went to the event, go through the red carpet … tremendous. And the following year to be nominated again and to go and win, it is beautiful. I hadn’t even dreamed of that. When I was in my career as a music student I never imagined it would ever get there. Even so, awards in music must be taken with humility. They serve a lot for work, but we know that it is a step that helps us to continue building and continue working better.

Christina: It is not the end. It feels beautiful to be recognized by colleagues in the industry, it is very special. We also continue to make music focused on children, on families, there will be another dream that came true and that is that the largest publisher in children’s books transformed three of our songs into books. One continues working to create these resources and families have more and more materials to continue dreaming and learning in both languages.

Other topics that may interest you:

123 Andrés, the Colombian duet that is nominated for the Anglo Grammys