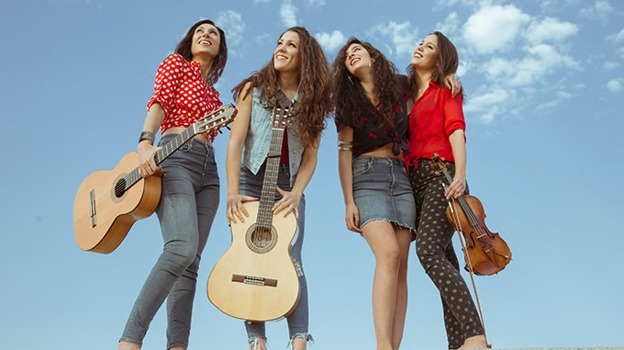 “I have fingers that I don’t even feel and it’s not because I touch the guitar strings, but because I don’t stop responding to the messages that come to my mobile,” says the Sevillian Marta Robles Crespo (Mairena del Aljarafe, 1976), one of the four members of the musical group Las Migas, together with Carolina Fernández (voice), Alicia Grillo (guitar) and Roser Loscos (violin), who last week received one of the greatest awards on the international scene. Nothing more and nothing less than a Latin Grammy for Best Flamenco Music Albumfor ‘Free’.

And a little piece came to Mairena del Aljarafe, the city where she was born, where she studied and where she trained musically until she went to Amsterdam at the age of 20 to complete her studies. Marta, who is the founder and composer of the group, like the other three members, is now “in a cloud,” she tells ABC as soon as she landed in Rome this past Monday.

«None of us went to Las Vegas, where the Grammy Awards were held, because on the 19th we had a concert and we asked a friend who was going to go if, by chance, they gave it to us to pick it up. Also, we never thought they were going to give it to us or else we would have already altered the dates. So it was. Go figure. We neither expected it nor was I aware of being such an important prize”, Marta, a graduate in Classical Guitar from the Manuel Castillo Superior Conservatory of Music of Seville, details to this outlet.

Memories to your uncle Rafael

It is not the first time that this flamenco female group has nominated for a Grammy, since already in 2017 he was nominated for the album ‘Vente Conmigo’ as the best Flamenco album. Paradoxes of life, on that occasion they did come, although they came empty.

When asked about his flamenco rootsMarta, who is also a graduate in Classical Guitar and a Master Soloist Degree in Flamenco Guitar from the Sweelinck Conservatorium in Amsterdam, «I always have to mention my uncle Rafael Crespo, already deceased, since everything I do is for him. He was the one who taught me to play the guitar when I was little and the one who told me not only to focus on this instrument, but also to open up to flamenco ».

Marta remembers that despite the distance, she lives in Catalonia, “every time I can I’m in Seville and Mairena.” In fact, she hopes to return to her family home this Christmas, where she is expected her parents, Enrique and Remedios, and her two sisters, Pilar and María. A few days later, on January 28 they play at the Teatro de Los Remedios.

Her father was a teacher at the school where she studied, Aljarafe de Mairena, and where her sister Pilar teaches. “Don’t you see how happy she was when they gave her a bouquet of flowers for my award”, says Marta, who has a degree in Flamenco Guitar at the Escola Superior de Música de Catalunya (Esmuc) in Barcelona.

But, what does this Grammy mean for her and her group? “It’s a gift, It is recognition of my career. I have always considered myself a fighter who never gives up and is always confident to keep going. It is an award with which I share with my people. It is a record that I produce but behind it are Oriol Riart (co-producer), louis villaby Unomusic (co-producer) and Miguel Angel Gonzalez (master)».

Despite having received this Latin award, Marta assures that “honestly and since we did not go to Las Vegas, we do not know when we are going to have it with us, but the important thing is that we have won a Latin Grammy and that the person who received it, Miguel Ángel González, will deliver it to us, sure, “he says with a laugh.

The preview of the Latin Billboard awards, with Bad Bunny as the great favorite | UPR
Sofia Campos returns to Puebla after being nominated for the Latin Grammy
This is how Camilo supports the future creators of Latin music
Tweet
Share
Share
Pin
Other links: https://awardworld.net/resources/