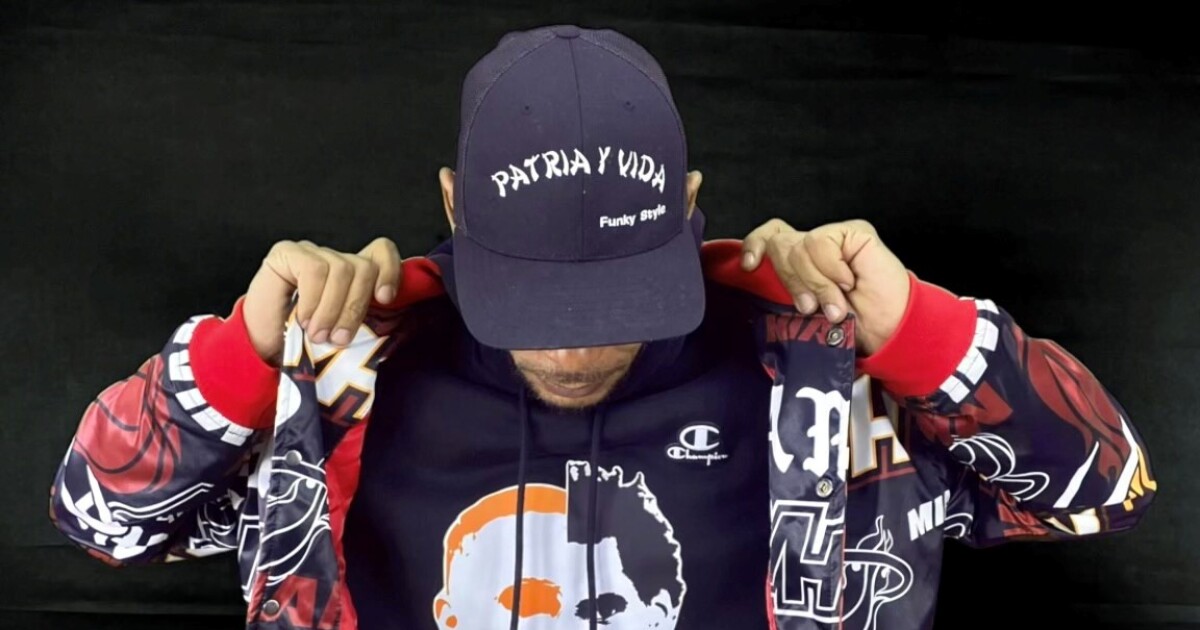 More than 10 million views on YouTube, an anthem of hope for change in Cuba, a link between Cubans and two Latin Grammy awards: the song “Patria y Vida” celebrates a year of success, but the imprisonment of one of its interpreters and the situation on the island cloud the anniversary.

“I don’t celebrate anything, I’m happy about the things that are happening thanks to the events of ‘Patria y Vida’, but, believe me, I’m not here to celebrate. I will be happy, I will laugh and celebrate when I am with my brothers who have personally suffered all these harsh circumstances,” rapper El Funky tells Efe.

Eliécer Márquez Duany, El Funky, is one of the two “Patria y Vida” artists who lived in Cuba -the other four reside in Miami- when the song was released as a video on YouTube on February 16, 2021.

The other is Maykel Castillo, known as El Osorbo, who has been imprisoned since before the popular protests of July 11, of which “Patria y Vida” was the “soundtrack”, as Yotuel Romero, another of the artists, says. of this implacable song with the communist regime.

PRISON FOR THE ONE IN CUBA AND AWARDS FOR THE OTHERS
El Osorbo, despite numerous requests for his release, remains imprisoned in the “Kilo 5 and a half” prison in Pinar del Río.

Until now, he is the only artist who has won an award as important as the Latin Grammy while being deprived of his freedom.

“Patria y Vida”, which also features the voices of Alexander Delgado and Randy Malcom Martínez, who form the duo Gente de Zona, and the singer Descemer Bueno, was chosen song of the year and also won that award in the urban genre category. at the 2021 Latin Grammys.

“El Funky”, who left Cuba in November, attended the awards gala in Las Vegas along with the other members of this project that used music to express the Cubans’ desire for change and their total disagreement with the Government” of the island, according to his words.

The rapper is dedicated to launching his musical career in the United States, but he does not forget his friends in prison, El Osorbo and the plastic artist Luis Manuel Otero Alcántara, and “all the other political prisoners.”

Changing the motto “Fatherland or Death”, of the Communist Party, the only legal one in Cuba, for that of “Fatherland and Life” and with a catchy chorus that uses the terminology of the game of dominoes, very popular among Cubans, the song tells the regime in power since 1959 that the time has come for it to go.

“No more lies. The people ask for freedom, not more doctrine. Let’s not shout homeland or death anymore, but Homeland and Life”, sing these artists who used the stage of the Latin Grammys to claim democracy in Cuba.

The song quickly gained popularity in Miami, where the words homeland and life began to be seen painted on cars, walls, t-shirts and anywhere visible, but above all on social media, from which it spread to Cuba and other countries.

In the protests of July 2021, it was the motto most used by the demonstrators and many, minors included, later paid with arrests and trials for having shouted or sung it.

A POWERFUL SONG
“‘Patria y Vida’ is one of the few songs in the contemporary Latin repertoire that not only launched itself head-on to ask for a change, but also did so despite the fact that its performers had a lot to lose by doing so,” Leila told Efe. Cobo, executive director for Latin content and programming at Billboard magazine.

In the opinion of this specialist in Latin music, “precisely that honesty and desperation are two fundamental elements in her success”.

“Beyond its call, ‘Patria y Vida’ became a hymn for Cubans who were looking for a change because it is a great song: it has a great choir, excellent raps, great lyrics, and I love how it combines the melodic with the ‘estacato’ of the rhymes”, affirms Cobo.

But, he adds, his “great success, in my opinion, is that he managed to get the world to look at the situation in Cuba with different eyes and to talk about rights in Cuba with much more urgency.”

Cobo underlines that “it is a powerful song and a powerful testimony of what music can achieve”.

From New Jersey, the famous Cuban saxophonist Paquito D’Rivera tells Efe: “The tremendous success took me by surprise and although I don’t cultivate that type of music, the song impacted me (…) You can talk about a before and after ¡Patria y Vida!”.

Speaking about the situation in Cuba after the protests, the musician pointed out: “to say it with music, ‘El cuartico is just the same’ and even worse, because they don’t even hide anymore to publicly hit the defenseless population”.

“For me,” he says, “every day everything is more confusing, nebulous, and sometimes it reminds me of that famous definition of ‘horizon’, that imaginary line that the more we try to reach, the further it gets.”

“Proud” to be part of a musical project that gave a voice to those in Cuba who “have no access to anything” and showed the world “the power of art and truth”, El Funky does not lose hope and calls unity, which “is always what we Cubans lack.”

In April his permit to remain in the United States will expire, but before that he will request political asylum. Going back to Cuba today is not possible, but he hopes to be able to do it soon. “If it’s not today, it will be tomorrow,” she says.

A year of success for Patria y Vida, the song that mobilized Cubans