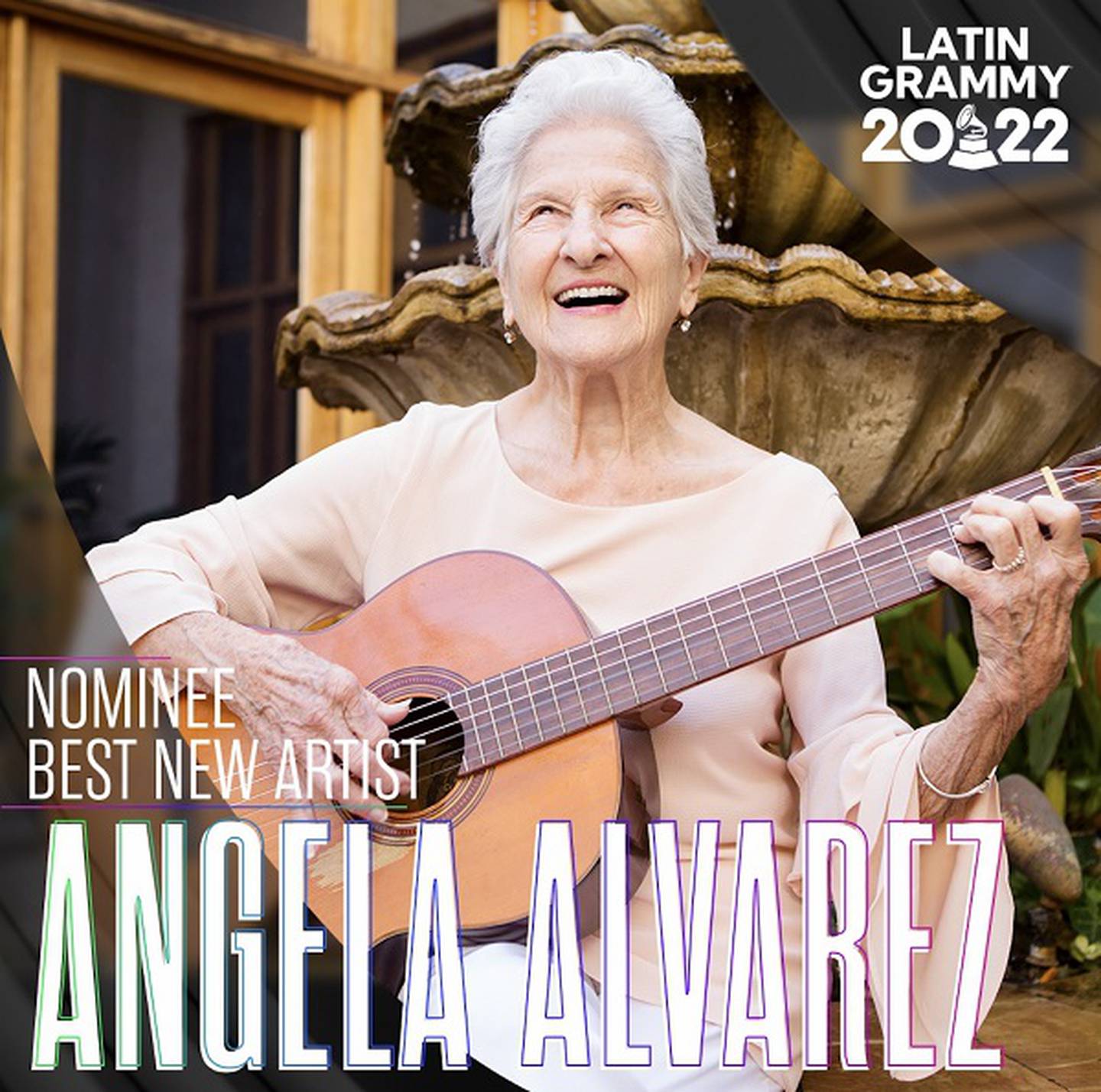 MIAMI — At 95 years old, Cuban singer-songwriter Angela Álvarez is living proof that dreams can come true, as long as they come from the heart, as she did with the Latin Grammy nomination in the category of “Best New Artist.”

This migrant grandmother has been tireless in pursuit of her musical dreams, overcoming countless obstacles to make history as one of the oldest artists nominated at 95 years old.

Growing up in Cuba, Angela Álvarez was driven to become a singer-songwriter since she was a child when she secretly wrote songs.

Through all the pain and suffering she experienced over the course of her 95 years, including the ultimate sacrifice in sending her children to another country so they could have a better life.

She emigrated to the United States where she received the premature death of her husband and daughter due to cancer. She was left alone with an eternal emptiness that, full of song, is hers, her voice that was inside her, becoming stronger and stronger, demanding that one day it be heard.

It was her grandson, film composer Carlos José Álvarez, who finally helped his grandmother share one of her most precious but hidden treasures with the world.

Inspired by his grandmother’s shocking story, he assembled a team of world-class Grammy Award-winning musicians to record her intimate songs that conveyed both the sadness and joy she experienced in her life.

The result was her acclaimed 2021 self-titled debut album, which led to her historic nomination this year for the 23rd Annual Latin Grammy Awards.

With the release of her first album, the grandmother caught the attention of filmmakers Paul Toogood and Lloyd Stanton, who continued to highlight her extraordinary life with a documentary titled “Miss Angela” narrated by legendary actor Andy Garcia, who later joined the stage. with her at the historic Avalon Theater in Los Angeles.

Earlier this year, she appeared alongside the famed star again on HBO’s “Father of the Bride,” playing the role of Tia Pili and delivering a powerful rendition of the iconic bolero “Quiéreme Mucho.”

“As a fanatic student of Cuban music, it is easy to recognize when you see someone who is special, not only musically, but also lyrically (…) Ángela Álvarez is a true discovery. I feel honored to be a part of this, to be asked to lend my support,” said Andy García.

Now at 95, Álvarez continues to fulfill his destiny and influence the world with his unparalleled voice and captivating story, serving as a spectacular inspiration to anyone and everyone who has ever had a dream they thought would never come true. reality.

The 23 Latin Grammy Awards will be in Las Vegas, at the Michelob Ultra Arena at the Mandalay Bay Resort & Casino, on Thursday, November 17. The three-hour broadcast, produced by Televisa Univisión, will be live on Univisión.

Ruben Blades, third from left, Roberto Delgado, right, and his orchestra receive album of the year for “SALSWING!” as they hold up the Panamanian flag at the 22nd Latin Grammy Awards on Thursday, Nov. 18, 2021, at the MGM Grand Garden Arena in Las Vegas. (Associated Press)

Angela Álvarez, life story behind the Latin Grammy nomination at 95