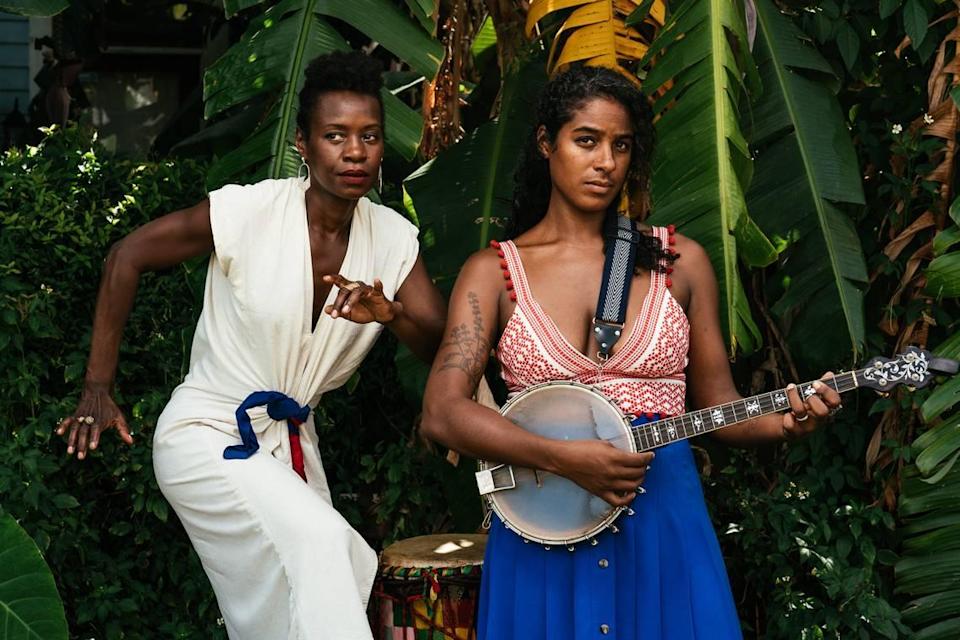 Radio Haiti-Inter was the voice of the people. Launched in the late 1950s, it was Haiti’s first independent radio station reporting critically on the country’s oppressive regimes, corruption and the lives of its people, all in Creole, not French.

But shortly after its leader, journalist Jean Dominique, was assassinated, the station fell silent.

On Friday, the singer Leyla McCalla stars in Breaking the Thermometer to Hide the Fever, a multidisciplinary performance that combines live music, dance, archival footage and recording to tell a story of Haitian heritage, pride and history. As McCalla plays the banjo and sings in Creole, a dancer moves to the music and a video projection plays images of Haitian life.

McCalla, a renaissance string woman, plays the banjo, cello, guitar and sings during the show at the Miami Theater Center. The performance coincides with the release of her self-titled album, her latest solo project after parting ways with the Grammy-winning string band Carolina Chocolate Drops.

As the daughter of prominent Haitian activists, McCalla said she grew up feeling caught between the United States and Haiti. As she prepared for the performance, the Miami Herald caught up with McCalla about Breaking the Thermometer and how she helped him explore and celebrate her “Haitianness” of hers. (This interview has been edited for brevity and clarity.)

Q: What inspired Breaking the Thermometer? How did this project start?

R : Duke University contacted me in 2016. The library had recently acquired the Radio Haiti archive, and they were doing a series where they paired an artist with a collection of archives and commissioned them to create a multimedia show. They give you free rein to create whatever you want.

So I was commissioned to create a performance based on the Radio Haiti archive, and it was a really incredible journey to explore late 20th century Haitian history. The work of this radio station, the legacy of these journalists, encouraged me to reflect on many of my own questions regarding my condition as a Haitian. Breaking the Thermometer to Hide the Fever is the manifestation of all this research.

Where does the name come from?

It comes from a quote by Jean Dominique. He described the independent press as the people’s thermometer. You can break the thermometer, but it won’t hide the fever.

What can the public expect?

It’s going to be me, playing cello, banjo and guitar and singing on stage, accompanied by two percussionists. Sean Myers plays the drums and Markus Schwartz the Haitian drums, the tanbou. We have an amazing choreographer and dancer named Sheila Anozier who dances, acts, sings and tells stories.

And there will be a lot of archive footage, both from the radio station and from Haiti, scenes from Haiti, Haiti during Carnival. I wanted to create something that would show the depth and beauty of Haiti.

I realized that there are very few nuanced depictions of Haiti in the US media. This has been a part of my life growing up as an American, feeling torn between these two identities and feeling like I belong to neither. Through this work, I have learned that I belong to both places. I am learning to assume it in my artistic practice.

What was it like growing up between two identities?

My parents have been very involved in the human rights of Haitians. Haiti was always part of my conscience.

When I traveled to Haiti as a child, I felt very “other”. I could see that there was a class difference, and I could see that I came from a place of privilege as an American girl. And then, when I grew up in New Jersey, in the United States, I also felt “other”. Part of that is blackness, part of it is being Haitian and having to define for myself what it means to be a black woman.

There are many arrival points on this type of trip. I think all of this research that I’ve done on Haiti is filling in a lot of the gaps in my knowledge. I was born in 1985, a few months before the fall of the Duvalier regime, so there are times when I can see how old I was when these things were happening historically. It helps me better understand where I come from.

He performs in Miami, which is home to a significant Haitian community. What do you hope Miamians take away from the play?

I hope that people in Miami and abroad take away that Haiti is a beautiful place. It is a complex and nuanced place, just like the United States. I hope it helps deconstruct some of the stereotypes and stigmatization that people have of Haitians.

I also hope that people realize that the fight for political sovereignty, for democracy, for freedom of expression, for an independent press, that no society is immune from those fights. In many ways, I think we’re struggling with that as a society in America. Obviously, we are seeing it in the Ukraine and in Russia, where many independent media outlets have gone underground.

This Haiti case study is actually a very global situation, and we are all connected to these struggles in some way, whether we realize it or not.

Than: Breaking the Thermometer to Hide the Feverby Leyla McCalla

This article was produced with the financial support of The Pérez Family Foundation, in association with Journalism Funding Partners, as part of an independent journalism fellowship program. The Miami Herald maintains full editorial control of this work.