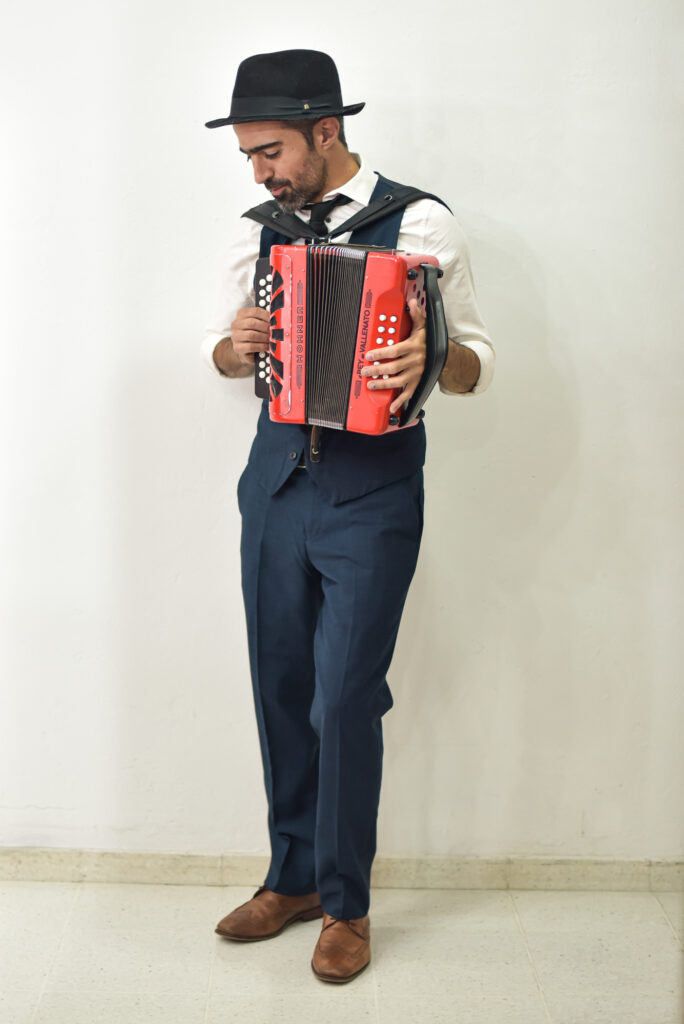 Gregorio Uribe, Colombian musician, composer, arranger and accordion player, premieres today ATLAS, the fourth single from what will be his next album “Hombre Absurdo” that will be released in January 2023.
Throughout his musical career, Gregorio Uribe has wanted to take the sound of the accordion beyond vallenato, exploring sounds and genres such as cumbia, jazz, and big band music. Curiosity for new sounds led him to meet maestro Carmelo Torres, one of the greatest exponents of accordion music, with whom he learned to explore cumbia sabanera.

And precisely ATLAS is a song that brings together all the musical elements of this deep rhythm with lyrics inspired by the phrase of the German philosopher Friedrich Nietzsche: “God is dead.” The juxtaposition of music and lyrics consists of combining the tropical and musical Colombian language with the strong presence of the sabanero accordion, the vallenata box, guacharaca and happy drum, with metaphors, allusions, quotes and myths from Western literature, always seeking to show the accordion beyond vallenato.
Gregorio Uribe composed this song at a time when he was searching for meaning and spirituality in his life. “Throughout my life I have had a changing relationship with religion and the transcendental. I have been a believer, an agnostic, and an atheist, but in recent years I have begun to see beliefs as an almost necessary psychological faculty. In “Atlas” I explore some of the personal and social consequences of losing connection with the divine.”

The ATLAS video clip was recorded between New York, the city where he has lived in recent years, and Evitar, a municipality in the department of Bolívar in Colombia.

“The idea here was to show that contrast between that New York, urban, fast, underground life (literally) with that life in “Macondo”: slow, outdoors, familiar. It’s not about judging if one or the other is better, but rather they show what I am musically because I feel a little both or neither. In both I see beauty and both inspire me to make music” says Gregorio Uribe.

On January 19, Gregorio Uribe will be performing at the David Rubenstein Atrium of the legendary Lincoln Center in New York City, where he will present his third album “Hombre Absurdo” live for the first time, which he will premiere that same day.

Gregorio Uribe is a Colombian singer-songwriter and accordionist who has dedicated his career to writing music alongside his dear companion; the accordion. In his search for a personal sound, he has gone beyond the popular vallenato and has explored rhythms such as the “sabanero accordion” championed among others by Andrés Landero, Carmelo Torres and Lisandro Meza. The rhythms of cumbia, paseaito, and pasebol are also tinged with Cuban timba, Puerto Rican bomba, and Dominican merengue, reinforcing the artist’s love for all Afro-Latin music.

His musical versatility and charisma have allowed him to collaborate with stars such as Rubén Blades and Carlos Vives, jazz icons such as Paquito D’Rivera and with masters of Colombian ancestral music such as Martina Camargo and Diego Obregón. He has taken his music to great concert halls like Carnegie Hall and Madison Square Garden in New York and to places like Tierra del Fuego and Montes de María.

Gregorio Uribe participated as a guest artist in the Latin GRAMMY winning album ̈Marc Anthony for Babies and in the New York Times’ Best Seller “HOME: Where Everyone is Welcome” by Deepak Chopra. He has been named by the Colombian government as one of the “100 most successful Colombians abroad” and has been an innovator in the field of music tourism with the “Sounds of Colombia” project; an initiative together with Impulse Travel in which international travelers get to know the country through its traditional music and its respective teachers.

Live, it has a minimalist accordion, percussion and bass format that lends itself to continuous collaborations. He is about to release his third album “Hombre Absurdo” which has been joined by great icons of Latin music such as Jorge Villamizar, lead voice of Bacilos, the “tri-rey vallenato” Alfredo Gutiérrez, the piano of the composer Nicolás Ospina and the singer and double Latin GRAMMY nominated accordionist Diana Burco. The title of this production refers to Camus’s “absurdism” and the tension that arises from the search for meaning in a world that perhaps cannot provide it to us and could be described as “existential cumbia”.

Nicole Zignago, Latin Grammy 2022: from studying at Berklee to singing at the National Stadium in fr...
From the X Factor to the Latin Grammys, this was Farina's rise in the urban genre - KVIA
Mon Laferte wins the fourth Latin Grammy of his career for his album Seis - La Tercera
Tweet
Share
Share
Pin
Other links: https://awardworld.net/resources/